Monday Tip-Off: How To Choose Teams in Franchise Modes 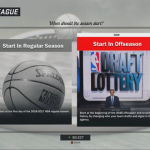 I’ve been away camping over the weekend, so it’s been a few days since I played NBA 2K17. However, I can guarantee that it won’t be long before I’m picking up the controller once more, and returning to the virtual hardwood. So far, I’ve been playing a lot of MyCAREER and meeting up with the guys to play 2K Pro-Am, but I’m still very keen to return to my roots as a franchise gamer and begin a MyLEAGUE game. Of course, that’s something I might still hold off on until the opening night rosters have been pushed through.

In the meantime, I’m still mulling over a few ideas for what I’d like to do with MyLEAGUE. My first choice is always the Chicago Bulls, and their offseason acquisitions have made them an interesting option. I’m intrigued by the possibility of taking control of the Philadelphia 76ers, and I also really like the Charlotte Hornets’ branding. The team you choose to play a franchise game with obviously plays a huge role in how much you enjoy the experience, so I thought that for this week’s Monday Tip-Off, I’d discuss the selection process and offer up a few tips.

I’ll begin with some obvious advice: if you have a favourite team, then they should be at the top of your list. Franchise modes allow us to play out our “If I were running the team” fantasies, and what better team to overhaul and guide to multiple championships than your favourite? There are exceptions to the rule, of course. If you feel like a change of pace, or if your favourite team’s roster isn’t looking too healthy right now, you may have to look elsewhere. Generally speaking though, controlling your favourite team in franchise modes is a good default choice, if no other teams appeal to you.

While it may seem like I’m stating the obvious there, it bears mentioning because there are times when franchise gamers avoid picking their favourite teams – or another team that appeals to them – in the interests of originality. For example, if quite a few people are maintaining story threads about your favourite team, or another team you were considering, it may be tempting to avoid using them in order to be different and diversify the stories section. While it’s a nice idea and may very well pan out, you should ultimately choose the team that appeals to you, regardless of how many other people are playing with them, and sharing stories about their experiences. That leads into my next piece of advice, which is to think twice about soliciting suggestions from the community as to who you should pick for your franchise game. That’s not to say that you shouldn’t ask, or that we can’t give good advice, but at the end of the day, only you know which team you’ll enjoy playing with. When this question is posed, it’s usually done in order to select a team that will make for a popular and successful story thread. The thing is, if your enthusiasm for your franchise game is driving the story thread, and your thread is entertaining, it won’t matter if it’s the third Los Angeles Lakers story running at that particular time.

Whether it’s your favourite team or another club altogether, you need to be able to enjoy everything about them. Ask yourself a few questions: is their roster appealing? Can you make changes to it, if you so desire? Are they fun to play with? Do they suit your style of play? Do you like their branding? If not, are you willing to re-brand them in MyLEAGUE or MyGM? From the players to the aesthetics to your feelings towards the team in real life, is this a team you feel you can play with game after game, season after season? Is there anything that’s likely to make you regret your choice, or tire of a team after only a few games?

These are the factors you need to consider when determining whether or not a team is going to be a good choice for your franchise game. You also need to consider what kind of challenge you want, and what you’d like to do with your franchise. If you want to dominate the league straight away, you’ll obviously want to choose a team that’s already built for success, or is in a position to make a couple of deals to get there. If you want more of a challenge and don’t mind enduring the losses or simulating the bulk of a few seasons, you’ll probably get more enjoyment out of choosing a team that’s currently rebuilding.

If you like to make a lot of trades, it’s generally best to pick a team with a deep roster, as higher rated players tend to be easier to deal. Once again, it depends on how much of a challenge you want, but if you feel like making a bunch of crazy blockbuster deals, the Golden State Warriors are clearly going to a better option than the Denver Nuggets. If you’re eager to play a few seasons and have some long-term plans in place, you’ll definitely want to check out each team’s payroll to see what kind of cap space they’re going to have in the near future, and how long you’re going to be stuck with certain players. In short, it’s important to do your research, and take into consideration every aspect of a team before you choose it. While it’s hardly the end of the world if you do end up playing a few games in a franchise mode and abandoning it to start over, you can save yourself some time if you think hard about your choice beforehand. Of course, if you’d like a few further suggestions on how to choose a team in franchise modes, here are eight scenarios that you might want to consider. Hopefully, the tips and scenarios that I’ve outlined can help some of you pick a team when you’re stuck making a choice, and avoid spoiling the franchise mode experience by selecting an ill-fitting team. Don’t forget that it’s a good idea to play a few exhibition games with a team to test out their appeal, and if you do find that you’re truly not enjoying your choice after about five games or so, start a new game (or switch control to someone else, if you’re playing MyLEAGUE). We have some really deep franchise modes on offer these days, so choose wisely, and get immersed in the experience!

Some good advice in there mate

I think the new addition of the Expansion team is a really nice feature that has a lot of people talking about/ youtubing and posting about in this site’s story thread which is good to see again.

I can really see the attraction to it with the expansion draft it reminds my of the old nba live games that allowed you to use the Raptors/Grizzlies and later on the Bobcats.

I did actually think of starting one myself and bringing back the Vancouver Grizzlies since there whole branding is already on there, just need to get theses sliders right and I think 2k needs another patch (to fix the last patch…)

I think expansion teams are going to be very popular this year. I’m still thinking it’ll be a secondary MyLEAGUE game for me, as I like to start out franchise modes with a fairly strong connection to the real NBA, and then start creating my own reality. However, it’s definitely looking like people are having fun with it.