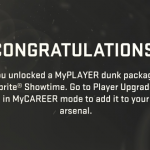 The 2016 NBA season tips off in just a couple of days, so I’m expecting to see the official social media accounts for NBA 2K start dropping some goodies in the form of Locker Codes for NBA 2K16 very soon. While the random rewards aren’t always particularly generous, they do provide a good opportunity to stock up on Virtual Currency or MyTEAM points, snag a great MyTEAM card, or unlock an animation for your MyPLAYER. If you’ve got the game fired up when Locker Codes drop, it’s well worth punching them in.

However, there’s the rub: it’s very easy to miss out on redeeming a code, especially if you’re on the other side of the world. And even if you are in the same time zone as Visual Concepts, you have to be fast – sometimes, ridiculously so – in getting into the game, and punching in the codes. Otherwise, you’re not getting any freebies.

On one hand, this is fair enough. There’s only so much stuff that 2K can freely hand out, when grinding and microtransactions are both part of the game. However, with the size of the NBA 2K user base, and its distribution throughout the world, I do feel that 2K could stand to be a little more generous with the Locker Codes; both in giving gamers world-wide a chance to redeem them, and in the rewards that they yield.

I’ll admit that I’m a little biased here, given that I live in Australia. I should also acknowledge that I have been able to enter Locker Codes in time, and on occasion, I’ve received what I’d deem to be a decent reward. Having said that, if I wasn’t self-employed and working at home some of the time, those opportunities would be far rarer. As it stands, firing up NBA 2K and punching in Locker Codes within a couple of minutes of them being posted is too often too late for limited quantity codes. If you have to wait any longer than that because of where you are in the world, you’ve got no chance. In the spirit of goodwill, there are a couple of things I’d like to see 2K Sports do here. First, I’d suggest larger quantities when limited Locker Codes are released. With so many people playing NBA 2K these days, a two minute window for a shot at redeeming Locker Codes is not big enough. Either increase the capped quantity, or open up the code to as many people who can redeem it within a set time; say, at least fifteen minutes after it goes live.

Second, I’d suggest releasing additional Locker Codes at a time that gives international gamers a better chance to redeem them. Alternatively, to ensure “one per customer” – which is absolutely fair, in my view – release a second run of the earlier codes, at a more favourable hour for gamers in other time zones. By all means, let it also be a second chance draw for North American gamers who missed out the first time, and happen to be up early or late, playing NBA 2K16.

Beyond that, I feel that handing out a few more “unlimited until an expiration date” Locker Codes would also be a nice gesture. Depending on whether 2K elected to hand out weekly or monthly codes, the quality of the rewards could differ accordingly. Again, there are only so many freebies that 2K can be fairly expected to hand out, and a weekly bonus shouldn’t be as generous as a monthly one. That said, I would like to see them celebrate certain events during the NBA season with more unlimited Locker Codes, giving all gamers an ample chance to pick up something cool from time to time…providing they fire up the game, and punch in the code. They’ve done that before, such as during the 2015 Playoffs, and it’s always been appreciated.

Now, you could argue that Locker Codes shouldn’t be handed out like Halloween candy, and that the timing of their release should be based upon their largest market; we can safely assume that is indeed North America. And that’s a fair point. However, even if the quantities stay the same, even if other time zones unfortunately must be left out in the cold, I don’t think anyone could argue that the rewards could stand to be better. After all, who wants to get sugarless candy on Halloween? Some of the random reward Locker Codes yield prizes that are, to be honest, downright insulting. A reward of 100 VC or 100 MyTEAM points isn’t even worth punching in the code; we should at least get enough to buy a MyTEAM pack, or upgrade a couple of ratings for our MyPLAYER. Animations for our MyPLAYER are a little better, but if MyCAREER, MyPARK, or Pro-Am isn’t your thing, they’re kind of disappointing to receive as well. To that end, it’d be nice to be able to pick between a few different random rewards depending on the mode you prefer, but at the very least, the minimum rewards should be a little less stingy.

The fact that it can be so difficult to redeem Locker Codes in time only makes the situation feel more insulting. When you finally manage to redeem a code in time, only to be handed a measly amount of Virtual Currency or MyTEAM points, you can’t help but feel like the game is giving you the middle finger with one hand, while earnestly pointing to the “Purchase VC” option with the other. Visual Concepts has built a lot of trust with basketball gamers due to the high quality of NBA 2K throughout the years, but when it comes to their handling of Virtual Currency and microtransactions, there’s definitely less goodwill.

Of course, it should be noted that we do have other opportunities to earn better bonuses. This year, you can earn Virtual Currency by watching episodes of 2KTV, and the MyNBA2K16 app provides daily opportunities to do the same. If you’re in need of some extra VC, you don’t have to rely on Locker Codes to give you that boost. It should also be noted that while NBA Live isn’t as heavy on microtransactions as NBA 2K, NBA Live 15 and NBA Live 16 have also handed out a mere 200 or so Ultimate Team coins for watching optional advertisement and PSA videos. In short, both games dole out some disappointing rewards for tasks that are simple, yes, but in their own way, still frustrating.

At the end of the day, as long as Locker Codes are a part of NBA 2K, I’d like to see them handled a little better. Larger quantities, more substantial rewards, and if possible, codes that account for NBA 2K gamers in other time zones. It remains to be seen just how Locker Codes will be handled this season for NBA 2K16, so hopefully we won’t end up feeling locked out, and wanting for more in our random rewards. That wouldn’t be a good combination.