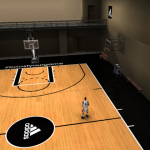 We’re at midcourt, and the ball is about to go up…it’s Monday Tip-Off! Get your week started here at the NLSC with a feature that’s dedicated to opinions, commentary, and other fun stuff related to NBA Live, NBA 2K, and other basketball video games.

A couple of months ago, I talked about why we enjoy going back and playing old basketball video games. Dusting off an old favourite is almost always an enjoyably nostalgic experience; however, the further back you go, the more aware you’ll be of how much basketball games have improved over the years. Some games are fun to revisit, but you can’t always spend too much time with them as they’re just too outdated, too primitive compared to what we’re used to now. While that may mean a simpler experience with an appealing “pick up and play” factor, it can also feel a bit shallow after a while.

Of course, there are some gamers who still prefer playing older titles to newer ones, for various reasons. Whether you’re still actively playing an older basketball game, or you’re going back and playing an old favourite for a change of pace, the experience can be greatly enhanced by mods and patches. We still have quite a few people making updates for older titles, as we even had some uploads for NBA Live 2000 as recently as August last year. In terms of newer games, there’s still a thriving modding community for NBA 2K14 PC, even though a lot of gamers moved on to NBA 2K15, and subsequently NBA 2K16.

So, why do we still enjoy modding older basketball games, long after their popularity has started to fade?

Well, going back to my previous column about playing old favourites, it’s fair to say that we all have a strong affinity for certain games. Whether we’re playing them or modding them, we enjoy experiencing them again, in one way or another. Since there are still people actively playing some of the old games, there’s obviously still some interest in them, and therefore a desire to get updates for them. Interest in a basketball game fades with each new release, but some of the titles in the past ten to fifteen years retain a dedicated following of gamers and patchers alike. It’s something that Arcane and I touched upon in a recent episode of the NLSC Podcast. Retro modding, to coin a phrase, holds similar nostalgic value to actually playing the games. It’s a familiar experience, something that you can easily pick up again. As I’ve discussed before, it’s easy to get burned out on patching, but it’s something that a lot of us have enjoyed over the years. As such, working on an old game after some time away from it brings back fond memories of being creative, as well as the satisfaction of completing projects that you were proud of.

I can confidently say that I’ve experienced that feeling. With our 20th Anniversary of NBA Live celebrations – and yes, more content is in the pipeline, so stay tuned – I’ve decided to tinker a little with as many of the old games as I can. I’ve already released “definitive” roster updates for NBA Live 95 and NBA Live 96, which were actually quite fun to put together. It reminded me of when I first got into patching, after discovering the NLSC (then NBA Live Series Center) way back in 1997. It brought back good memories, and I enjoyed creating something for two of my all-time favourite NBA Live games.

More recently, I’ve been releasing a few updates for NBA Live 2005, NBA Live 06, NBA Live 07, and NBA Live 08. I kind of have to pick and choose what I work on, as it’s a matter of fitting modding in with my job, social life, and of course, the other content that I’m creating for the NLSC. However, I did want to get back into making a few patches this year, and I expect that I’ll continue to release a little something here and there, whenever I can. With the exception of one unpleasant individual, I know that those updates have an appreciative audience, which is definitely flattering.

There’s something quite challenging, and satisfying, in bringing an old basketball game up to date. It might be a bit pretentious to call it an art form, but I will say that whether we’re talking about NBA Live or NBA 2K, our modding community has done a great job of breathing new life into older releases. There are always going to be some limitations, but a lot of talented people have made the best of situation, and produced some fantastic current season updates through the years. It feels good to create something that provides gamers who can’t (or prefer not to) upgrade a means of playing with current rosters, or indeed, create a brand new experience entirely. It should also be noted that not every new basketball game is as easy to mod as its predecessors. Thanks to the efforts of Greg (aka gregkwaste), the modding community has been able to create some great updates for NBA 2K15 and NBA 2K16 these past couple of years. However, those games are not as modder-friendly as NBA 2K14 and earlier 2K titles were, due to being ports of the PlayStation 4 and Xbox One version, and tied to Steam as a digital-only release. To that end, projects such as HAWK23’s Ultimate Base Roster and skoadam’s U R Basketball continue to thrive, and are much appreciated by gamers whose rigs can’t handle the newer games.

To be honest, I wasn’t sure what I wanted to write about for this week’s Monday Tip-Off. I didn’t have anything prepared ahead of time, except for a couple of rough drafts, and some other ideas for potentially interesting topics that I’ve jotted down. But then I logged into the Forum this morning, and I saw a video that BWEYRE posted of Zach LaVine performing a variety of dunks in NBA Live 2004, one of my all-time favourite basketball video games, for which I created one of my all-time favourite patches.

How great is that? How fun is it to see LaVine throwing down spectacular dunks in a game that was released when he was only eight years old? That’s why we mod old basketball games, whether they’ve been out only a few years, or released over a decade ago. It’s not only nostalgic, creatively satisfying, and fulfilling in that we’re doing something nice for our fellow basketball gamers. It’s a lot of fun, and a novelty to see videos like that one, as well as experiencing moments like that for ourselves.

While we should always look to the future, developing tools and updates for the latest releases, I hope that we’ll always have a few people looking to do creative things with older basketball video games, to make retro basketball gaming just a little bit more fun. Our upload facilities will always be open to their efforts.