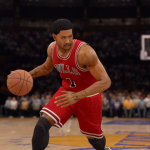 So, for the first few weeks of Monday Tip-Off, I’ve been posting my opinions on a variety of subjects. There’ll be plenty more opinion pieces coming your way in the Mondays ahead, but for this week, I wanted to do something a little different. This week, I wanted to talk a little about my basketball video game collection.

When it comes to the hobby of game collecting, I can’t imagine a lot of people are stocking up on basketball titles; after all, basketball gaming is a niche demographic to begin with. Also, as I understand it, when it comes to sports games, a lot of people trade in the previous season’s release when they pick up the current title. For the most part, however, I’ve kept my older basketball games – at least on one platform, when I’ve double-dipped – and more recently, I’ve been expanding my collection with a few bargains on eBay.

As I’ve mentioned a few times on the NLSC Podcast, I’m intending to put them to use for features here on the NLSC in the coming weeks and months. Obviously, we’ve tipped off our 20th Anniversary of NBA Live content – incidentally, more of that stuff is on the way – but there have been quite a few basketball games over the years, good, bad, and just plain interesting. I’m looking forward to talking about them a little more, revealing a few old gems, as well as some not-so-fantastic releases you may have forgotten about.

For now, though, I wanted to give you all a current catalogue of my collection. I’ve been meaning to take a photo with all the boxes, discs, and cartridges, but for the moment, a simple list will have to suffice.

When I type it all out like that, it makes me realise just how comprehensive my collection is…though there are several other games I don’t own. I do enjoy revisiting old favourites, and once again, I’ll be exploring quite a few them in upcoming features here on the NLSC. Look out for that stuff soon, and perhaps a couple of photos of my collection when I get around to it. In the meantime, what does your basketball video game collection look like? What are some of the games in my collection that you’d like to hear more about? Let me know in the comments section below, and be sure to post your collections!

Fair play to you if you get chance to even play half of them, I am struggling to get any real time in on 2k16 right now with no laptop the ps4 is our tv stream lol

Yeah, there’s definitely more games there that can be played on a regular basis! As I said, I don’t really trade them in or sell them, so a bulk of the collection has built up organically. A few others I’ve picked up just this year, filling in some gaps in the collection, checking out games I’ve never played before, and so on.

There’s only a few that I’d look to play on a regular basis, but the rest are there for a change of pace every now and again, or an NLSC feature. If nothing else, you never know when you might need to grab a screenshot!

…no. What I posted is a complete list of what I have. I’m not sure which game you’re even referring to there.

Ah. I believe every NBA 2K10 cover mentions the 10th Anniversary of the series; both my PC and Xbox 360 covers do.