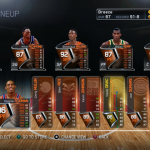 As I’ve mentioned in previous editions of The Friday Five and on the NLSC Podcast, I’ve become a fan of Ultimate Team since it finally made its debut in the NBA Live series in NBA Live 14. With Dynasty Mode and Rising Star still needing to be fleshed out into deeper experiences, Ultimate Team has pretty much been my mode of choice in NBA Live these past few years. I’ve also taken an interest in MyTEAM in NBA 2K, but I do prefer EA’s approach to the concept, and 2K has a lot more to offer in its other modes. Of course, MyTEAM does have one distinct advantage over Ultimate Team, for me at least: Michael Jordan.

Needless to say, when I drew a Michael Jordan card in NBA 2K14’s MyTEAM, I was pretty happy. With my nostalgia for the players of the 1990s – the era I grew up watching – I also had a lot of fun putting together a 90s squad for my Ultimate Team in NBA Live 15. However, I’ve yet to construct my ultimate fantasy team in either game, though it would currently only be feasible in NBA 2K. I thought I’d tip things off this week by sharing that lineup with you all.

Before we get going…just in case it isn’t clear, this isn’t a squad of the players that I believe to be the greatest of all-time (though there certainly is some overlap with that list). This is simply a fantasy lineup that I’d love to be able to put together to play with in Ultimate Team or MyTEAM, assuming that every player was available in both games. Having said that, let’s begin with my starting five… The 80s and 90s produced quite a few quality pivot men: Shaquille O’Neal, David Robinson, Dikembe Mutombo, Alonzo Mourning, and Patrick Ewing, to name some of the biggest stars in the middle from that era. My favourite, though? That would be The Dream, Hakeem Olajuwon. Supremely talented at both ends of the floor, I’d want his virtual counterpart to be my starting centre (or center, if you prefer).

The Reignman was my cousin’s favourite player when we were growing up, so he ended up becoming one of my favourites as well. His entertaining dunks are also very high percentage shots, so I’d be able to make good use of him on my ultimate fantasy squad. As it happens, I’ve been fortunate enough to pick him up in both NBA Live 14 and NBA Live 15.

Pip – my second all-time favourite player – has unfortunately eluded me so far in both Ultimate Team and MyTEAM. There’s no way that he doesn’t make the cut if I’m freely putting together a team to play with, though. Favouritism aside, Pippen could pretty much do it all at the small forward spot, and while players like LeBron James and Larry Bird are appealing options as well, I can’t go past Pip.

Come on, who else was I going to pick here? Look, I won’t begrudge anyone for choosing Kobe Bryant, Dwyane Wade, or even Clyde Drexler for their fantasy team. But MJ…he was pretty good, too, and he’s my all-time favourite player. I managed to get a 1993 Jordan in NBA 2K14, and I have a rookie MJ in the PlayStation 4 version of NBA 2K16 as part of the pre-order bonuses. Given the choice, I’ll always take a prime MJ as my starting shooting guard.

I’m guessing this choice might surprise a few people. With the other four players in my starting five, you’d probably expect me to choose someone like Gary Payton, John Stockton, or even Anfernee Hardaway. While that’s tempting, at this point, Stephen Curry can probably be called the best shooter in NBA history. My three-point game isn’t the strongest with those other four players, but Curry could more than make up for that all by himself. Seeing as how I’ve been known to struggle from long range, Chef Curry could certainly help out there. The best trade I ever made in a basketball game involved the acquisition of Kevin Garnett in my NBA Live 2004 Dynasty. KG has long been one of my favourite non-Bulls players – even if I don’t care for some of the elbows he throws – and he was a lot of fun to play with in that Dynasty game. I managed to get him on my NBA Live 15 Ultimate Team, but it’d be nice to have a prime version of him on my squad.

In the second year of my Bulls Dynasty in NBA Live 06, Ben Gordon turned into a beast. I managed to rack up multiple quadruple doubles (yes, really!), a 92 point game (yes, really, again!), and flat out dominate the league with him, winning over fifty games in a row and back-to-back championships. In real life, he was also – for a time – my favourite active player in the league. Sadly, his career has fizzled since leaving Chicago, but I have fond memories of playing with him in NBA Live. For that reason, he makes the squad as a sentimental choice.

Since I’ve got MJ and Pip, it makes sense to complete the Big Three of the Chicago Bulls’ second threepeat. With Rodman in the lineup, I’d definitely be looking elsewhere for offense, though The Worm was adept at making an impact with garbage buckets on the offensive glass. It doesn’t really matter though, as there’s plenty of offense on this team. Rodman would just be there to gobble up rebounds.

I want to have at least one Aussie on my ultimate fantasy team, and I’m going with Patty Mills, who thrills and pays bills. When Mills had that huge performance as the San Antonio Spurs clinched the title against the Miami Heat in 2014, I had to pick up his jersey…once he officially re-signed, of course. Virtual Patty would be able to provide me with some solid minutes off the bench when needed, with a few big threes here and there.

Again, the 90s was a good decade for centres, and the prospect of a two-headed monster of Hakeem Olajuwon and David Robinson is tempting, especially as you could probably play them together. Then again, you could probably play Shaq alongside The Dream as well, and even if you didn’t, that’s a dominant duo to have in the middle. I’d start Olajuwon out of personal preference, but likely split minutes fairly evenly with The Diesel, who tends to be as dominant in basketball games as he was in real life.

Well, who else is going to throw lobs to Shawn Kemp? Alright, there are a couple of other players on the squad who could do it, but for the sake of reuniting a great duo from the 90s, I need The Glove in there. Also, can you imagine a backcourt of Michael Jordan and Gary Payton? Throw Scottie Pippen in there at small forward, and that’s an incredible defensive trio on the perimeter and wing.

This was a tough one. Do I put LeBron James or Kevin Durant on the team, and bring them off the bench? Tempting, but that didn’t feel right. I decided to go with Glen Rice, who was quite effective for me as part of my 90s lineup in my NBA Live 15 Ultimate Team. And since I’ve gone with a retro theme for most of my squad, it seems only appropriate. In his prime, G-Money more than lived up to his nickname.

Also in the Franchise…

Now, I wouldn’t mind having LeBron and Durant on hand in my collection, just in case I wanted to change things up. You can also throw Derrick Rose in there, as well as Andre Iguodala (another player who I made great use of in NBA Live 15 LUT), Anfernee Hardaway, David Robinson, Dwyane Wade, Dirk Nowitzki, Tim Duncan, Mitch Richmond, Magic Johnson, and Larry Bird. With those twenty four players, I reckon I could mix and match to create some fun lineups to play with.

So, that’s my ultimate fantasy lineup. If you could put together your own ultimate fantasy team in NBA Live’s Ultimate Team or NBA 2K’s MyTEAM, what would it be? Let me know in the comments section below!