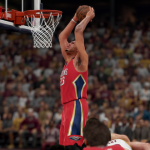 ‘Tis the season to make Wishlists…both in the sense that development is well under way for both NBA Live 17 and NBA 2K17, and the fact that for those who celebrate it, Christmas is almost upon us. For some of you, one or both of this year’s games might be in your stocking, but at this point, you probably know what to expect when you get a hold of them. The visions of the NBA video games that dance in our heads – not unlike the sugar-plums that Clement Clarke Moore wrote about – likely won’t be coming to fruition just yet.

In interviews with us and other websites, NBA Live Executive Producer Sean O’Brien has talked about wishing he could take the game he sees in his mind, and immediately give it to us. At the same time, I have to imagine that for Leftos and the rest of the guys at Visual Concepts, the gears in their heads are always turning, as they think of ways to make NBA 2K even bigger and better. And of course, we basketball gamers can come up with some creative ideas as well.

To that end, for this week’s Monday Tip-Off, I wanted to talk about my vision of the ultimate NBA video game. I want to keep things as practical as possible, but for the sake of fantasy and what-ifs, I’m also going to assume that the available technology can handle all of the concepts competently, and that licensing, likeness rights and so on would not be an issue. With that said, what would my ultimate NBA video game be like?

My ultimate NBA video game would play an authentic brand of virtual basketball, with real strategy and AI that makes intelligent decisions while reacting to the play accordingly. The players themselves would not only look like their real life counterparts, but play and perform like them as well. Authenticity would be the name of the game, when it comes to the experience out of the box. However, it would also feature gameplay sliders and settings, to allow for a more casual experience, or even a full blown arcade one, with the right tweaks. It would have universal appeal – or near enough, anyway – to all basketball gamers. My ultimate NBA video game would feature controls that are intuitive and responsive. They would be simple and logical in their approach, but also deep enough to have full control over advanced dribbling moves and shot types. I would personally prefer to only have dribbling controls on the right stick, and a couple of shoot buttons (one for jumpshots, one for dunks and layups) that could be modified with sprint and movements on the left stick. That said, a couple of different controller configurations – including the ability to create custom ones – would also be available.

My ultimate NBA video game would look and feel fantastic. All player faces would be scanned to properly capture their likenesses, and historical players would be re-created as realistically as possible. Animations would be smooth and life-like, looking great without compromising the responsiveness of the controls. The available technology would be used to its full extent for muscle movement, facial expressions, collisions, and rim interactions. Team arenas would look just like the real thing. Gamers would feel in control of the action, players would interact realistically, the crowd would look and sound great, and at a glance, the game could easily be mistaken for a real broadcast.

My ultimate NBA video game would boast a franchise mode that emulates the NBA season down to the finest details, with enough settings and options to customise the experience as desired. Obviously, it would also have multi-season play, with an in-depth offseason. I like NBA 2K’s current approach of including a full sandbox franchise mode with MyLEAGUE and a more RPG-based franchise mode in MyGM, though if I could only pick one, I’d opt for the MyLEAGUE approach. I definitely want that deep, immersive franchise mode experience.

My ultimate NBA video game would also have an engaging single player career mode. Personally, I’d forego the scripted, cutscene-heavy approach, and focus on making the mode an RPG-like experience…in the context of a basketball video game, of course. I’d prefer to create my own back story, completely customising my player’s biography as well as their appearance. Seeing how well NBA Live’s GameFace HD app has worked, that would be my preferred method of scanning my face into the game; failing that, there would be sophisticated face sculpting tools to create a good approximation. My ultimate NBA video game would definitely include the full All-Star Weekend…well, at the very least, the All-Star game, Rising Stars Challenge, Three-Point Shootout, and Dunk Contest. Those are the “main events” of the Weekend, and the ones that would be the most fun to play. I’d want the All-Star events to be accessible not only in the franchise and career modes, but as standalone modes that can be played at any time. Frankly, I don’t think any game has done the dunk contest as well as NBA Live did from NBA Live 2005 through NBA Live 09, so that’s the approach I would take with it.

My ultimate NBA video game would be released on all major platforms including the PC, and be modder-friendly. In fact, it would even have official tools that allow deeper external customisation, wherever necessary. In addition to being easier to create, the mods would be just as easy to distribute, install, and uninstall. While the main intention of the modding facilities would be to create a vastly different NBA-themed experience, they could theoretically be used to create the ultimate FIBA, Euroleague, NBL, or even D-League game. And, on a similar note…

My ultimate NBA video game would feature in-game roster editing and creation tools that are deeper and more comprehensive than anything we’ve seen so far. In addition to all the basic roster management functionality, we’d be able to access all attributes and player data when creating or editing players, allowing us to tweak their AI and performance, and assign full biographical information. With these tools, it wouldn’t be necessary to externally manipulate the roster files to do everything we want with them. Furthermore, we could edit teams, create custom teams, and if we wish, use the same face scanning app utilised by the career mode to scan our face and the faces of our friends onto created players. With the aforementioned modding functionality, we’d have robust and comprehensive customisation tools at our disposal.

My ultimate NBA video game would include historical content, such as noteworthy teams of the past – with complete rosters, of course – and special teams, such as decade All-Star squads. Needless to say, Michael Jordan would definitely be in the game. Historical players could be integrated into the current rosters for fantasy experiences, and the game would make use of them in challenge modes that would change up from year to year. We’d also see the era-specific presentation that NBA 2K12 boasted, and be able to manually select it for any game if desired.

My ultimate NBA video game’s approach to the team building modes – i.e. Ultimate Team and MyTEAM – would reward gamers with fair value in its packs, and fair rewards for its challenges. It would offer up entertaining challenges that could be played any time, and weekly challenges for special rewards. Full roster management functionality and an auction block – with restrictions to prevent outlandish prices – would be present to make team building a fun experience. Cards would also periodically be offered up for anyone and everyone to buy, if you want a guaranteed chance at snagging your favourite active player or NBA Legend.

My ultimate NBA video game would make full use of daily updates, from rosters to challenges and other content. I’m a fan of NBA Live’s BIG Moments and LIVE Season content, so those are concepts that my ultimate game would have. Major roster updates would be a weekly affair – player ratings shouldn’t be fluctuating daily, after all – but the “made fresh daily” approach used in NBA Live 09 wouldn’t go astray. Players would be added to the game as quickly as possible, to ensure that rosters are always as up to date as possible. Of course, with in-game roster editing and creation tools, there would be leeway for slight delays there.

My ultimate NBA video game would offer up a full compliment of online experiences. In addition to head-to-head play and Ultimate Team/MyTEAM content, there would be an online franchise mode, for gamers who prefer league play. For those after a more casual, pick-up game experience, there’d be a Pro-Am type of mode. Since we’ve added the All-Star Weekend, there would be online dunk contests and three-point shootouts…and other gamers would be able to log in and watch them. Perhaps they could even score the dunks! Finally, there would be firm but fair anti-cheating measures in place, to ensure fair play and good sportsmanship in all online modes.

My ultimate NBA video game would have top notch, TV-style presentation. The default camera angles would accurately replicate a real broadcast, bolstered by NBA on ESPN or NBA on TNT branding. There’d be smart AI for the commentary, ensuring as little repetition or badly timed lines as possible. There would also be several additional camera angles optimised for gameplay, as well as a few old school/”classic” camera angles for a retro experience. We’d be able to customise the soundtrack, the menus would be intuitive and easy to navigate, and the game as a whole would be visually appealing. My ultimate NBA video game…would be tough to make. NBA 2K has a lot of this stuff, but not all of it. NBA Live needs to have a lot of this stuff, but it has a couple of things that 2K doesn’t, things that are really great concepts to have in a basketball game. Unfortunately, licensing issues make it very tough to implement some of these ideas in either title. Still, if all this could happen, it would definitely be my ultimate NBA video game. What would yours look like?