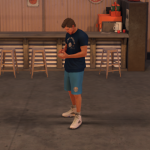 I realise that not everyone is fan of the virtual Twitter and text messaging in NBA 2K17’s MyCAREER. For some people, it’s a pointless annoyance, an unnecessary addition that has nothing to do with gameplay or replicating the experience of being an NBA player. I can certainly understand that point of view, but I have to admit, I kind of like it. For me, it contributes to the immersive nature and world building aspects of MyCAREER, making the mode seem more alive with something that’s very prominent in the real world. Beyond that, of course, some of the messages and Tweets are actually pretty funny…though not always for the right reasons.

There’s unquestionably a lot of intentional humour in MyCAREER’s text messages and Tweets. Certain Tweets represent (with painful accuracy) some of the less intelligent things that we basketball fans are prone to putting out there on social media. There’s in-jokes, banter with other players, and texts that add minor plot points to the background storyline. There are supportive Tweets from Leftos, which I always enjoy. And then, there are the text messages that are just plain weird, and most likely glitched. That’s the type of message I’m sharing with you today.

Take a look at this text message, and see if you can spot what seems off about it. Yes, that’s a text from my mother. Well, not my mother; my mother in the game’s universe. Mother Pres, if you will. And yes, she’s addressing me as “bro”, to which I reply “sup?”, because that’s how most mothers and sons talk to one another. It definitely makes sense that she’d be texting me about my Mitchell & Ness advertisement, and she might even try to be cool by using emojis to describe it as “lit” (or “straight fire”; one of the two, I assume). But it seems highly unlikely that after receiving a supportive text message from my mother, I’d respond with “Thanks man”. About as unlikely as her calling me “bro”, in fact.

Isn’t it fantastic, though? When I saw it, I knew that I had to capture a screenshot for posterity. It’s right up there with the photo of MyPLAYER and Ronnie where it looks like I’ve just punched him in the eye, or the couple of times I’ve hung out with Carmelo Anthony and appear to be under the influence of something. I can only assume that the text was supposed to come from someone else – Justice Young, maybe – and a glitch has it sent from Mom instead. I’ve also received a Tweet from Leftos that was definitely supposed to be from Kobe Bryant, so it seems quite plausible. In any event, it’s hilariously weird.

Am I upset? Has the sense of immersion been broken, tarnishing the MyCAREER experience? Not in the slightest! Look, bugs are inevitable in video games, and as long as they’re harmless like this and not breaking All-Star Weekend, they can be pretty funny. As I said, there’s plenty of intentional humour in MyCAREER, whether it’s Kobe telling me I don’t want to anger the Mamba, Draymond Green threatening to drop a triple-double on me if I don’t hang out with him, or some of the photos that are posted on the in-game social media. But this conversation with my mother? “Hey bro”? “Sup”? “Thanks man”? Nothing’s going to top that text, glitch or not.