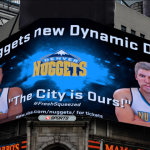 As I discussed in a recent Friday Five column, despite my resolution to return to my roots as a franchise gamer in NBA 2K17, I’ve been drawn into MyCAREER once again. I’m definitely enjoying the less intrusive storyline, getting to spend more time on the virtual hardwood instead of in cutscenes, and improving my MyPLAYER for use in 2K Pro-Am. With the 2017 season looming, I am looking forward to starting a MyLEAGUE game soon, but I expect that I’ll also continue to play MyCAREER over the next several months.

On top of the endorsement deals that result in billboards, advertisements, and so forth, MyCAREER includes opportunities to develop connections with NBA players and other personalities. Following the completion of your social and business obligations, photographs of magazine covers, advertisements, and certain events you’ve attended can be accessed through the in-game phone. Some of them are pretty funny, while others are somewhat terrifying. Just for fun, I thought I’d share some of my favourite photos so far, with a disclaimer that what is seen cannot be unseen. I kind of hope that Justice paid for my haircut, because I need all the Virtual Currency I can get, and frankly, my hair didn’t look any different afterwards. In any case, I was looking my best for a visit to Visual Concepts’ studios, where I was photographed hanging out with Ronnie 2K. I’m obviously supposed be mean-mugging for the camera while Ronnie winks, but it kind of looks like I’ve punched him in the eye and am angrily demanding that the proceedings come to an end. Maybe I was just more excited about appearing on the cover of Dime Magazine, since I once visited their offices in New York during an NBA Live community event. Incidentally, I spent way too much time getting NBA Live 2004 to generate its Inside Stuff magazine cover with a Create-a-Player version of my NBA 2K17 MyPLAYER on the front, so I’m sharing it here. Moving along, I’ve attended a couple of comic conventions, first with Jackson Ellis, and then with Damian Lillard. Apparently I don’t own a lot of t-shirts, while Lillard and Jackson shop at the same store. 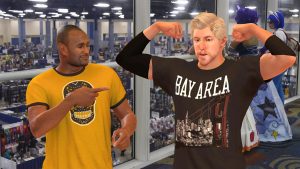 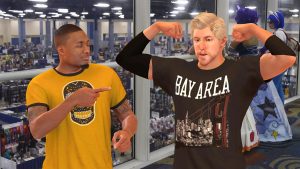 Getting on a billboard with Justice Young was pretty cool… But it hardly compares to a cultured night out with Hall of Famer and multi-time NBA 2K cover player Allen Iverson. We took in a musical, where I inadvertently showed up AI by wearing a tie. Furious at being outclassed, he briefly thought about smacking me upside the head, in a moment that was captured for posterity. Hey, it’s not my fault that I’m a snappy dresser. So much so, I ended up appearing on the cover of 2K Fashion Magazine. If you’re surprised to hear that they have one, don’t worry; so was everyone else on my fake Twitter feed. Perhaps I should try out that look in real life. I do have sunglasses that are fairly similar to those. Anyway, I agreed to hang out with Carmelo Anthony while he was in town, and it turned out that he wanted to go to a fencing class. Despite what my expression might suggest, we were indeed fencing, and not indulging in illicit substances, or copious amounts of alcohol. I guess we didn’t bother to ask whoever snapped the photo to take a second one. I’ve continued to mingle with the league’s biggest stars, as you’ll see in this final photograph of a trip to Foot Locker with Chris Paul. That smile. That smile will haunt my nightmares, and my face is the one it’s beaming out of. I’m not sure how you’ll cope, but I did warn you that what is seen cannot be unseen. Judging by some of the other MyCAREER screenshots I’ve seen posted in the Forum and on social media – real social media, in this instance – there are plenty of weird and wonderfully amusing photographs left for me to unlock for myself. It’s all part of the fun, so I’m looking forward to them. If nothing else, at least I don’t have to worry about not looking like my twin sister this year.