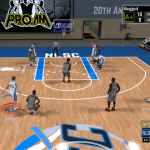 Glancing at some NBA 2K videos on YouTube, it does seem that a lot of gamers prefer the 2K camera. Situated above and behind the player being controlled, it’s intended to give the user a full view of the length of the court. The advantage of the 2K camera (and similar angles) is that it brings the user a little closer to the action, and the angle provides a wide open view of a player’s teammates, both in the halfcourt and in transition. The zoom and perspective flips can be problematic, though in some game modes at least, there are a few different settings options available. Fans of the angle feel it favours gameplay over presentation. Conversely, the authentic broadcast angles and their generic variants provide an aesthetic that is closer to the experience of watching an actual NBA game. That’s not to say that the broadcast angles are unsuitable for a quality gameplay experience, of course. Visibility can be limited when it comes to long outlet passes and spotting cherry-picking teammates – at least until the camera pans – but you hardly have trouble seeing the action on the court. It’s arguably easier to drive baseline without accidentally stepping out of bounds, as well as spot gaps and obstructions in passing lanes, compared to when the camera is always behind the player.

Personally, my preferred camera angle varies depending on the mode I’m playing. In MyCAREER, I’m currently using the Turbo angle, which is similar to 2K cam in its view of the length of the court, but without a camera “flip” when there’s a change of possession. The camera is always behind my player, and zooms in and rotates slightly depending on where I am on the floor. In that respect, it combines some of the benefits of both the broadcast and 2K angles, while being tailor made to player locked control. Unfortunately, it doesn’t seem to be available in 2K Pro-Am.

Instead, I use 2K cam in 2K Pro-Am. Because NLSC THRILLHO runs a lot of fast breaks with a fair amount of cherry-picking, and I’m the one running the point, I find it to be the best camera angle to make quick passes in transition. It suits my purposes when we slow it down and play in the halfcourt as well. Unfortunately, the spinning camera flip is a nuisance, especially when making a steal near halfcourt. It’s resulted in more than a couple of turnovers, and if nothing else, interrupts momentum when possession changes. Again, I’d prefer to use the Turbo camera, but cycling through the available cameras, it doesn’t appear to be selectable in 2K Pro-Am.

In all other modes, where I’m controlling more than one player – and even in MyPARK, where I’m obviously player locked – I use broadcast and sideline camera angles. In modes like MyLEAGUE and MyTEAM, I prefer the authentic broadcast camera angle from an aesthetic standpoint, and I also feel that it’s better to play on when I’m switching control between players. The default high sideline camera angle in MyPARK also seems to suit me better, especially since the courts aren’t regulation size. Aside from a couple of gripes in 2K Pro-Am, the different camera angles I use in each of NBA 2K’s modes work for me in each situation. I should note that no matter which camera setting I’m playing on, my controller configuration is set to Absolute, not Camera Relative. To me, Absolute controls have always felt more intuitive than controls that change depending on your camera setting and your position on the court. Of course, if you do prefer Camera Relative controls – which is the default setting in NBA 2K – then it’s something to keep in mind when you’re experimenting with different camera angles, and switching between them. I certainly would recommend experimenting with different camera settings if you’re uncomfortable with the defaults, to find out which one works best for you.

That being said, while it can be worth listening to the suggestions of your fellow NBA 2K gamers, don’t concern yourself with people who claim there is only one supposedly “correct” angle to use. Your preference of camera angle really doesn’t say anything about your level of skill, since each has its own advantages and disadvantages. And even if it did, who cares? The important thing is that you play NBA 2K in a way that you enjoy. If you find a certain camera is more aesthetically pleasing, use it! If there’s an angle that you find advantageous, opponents are free to counteract that by playing with the camera angle that works best for them.

Unfortunately, there are always going to be people who want there to be a “correct” choice. Naturally, it’s going to be their choice, which allows them to present a preference as fact, and thus claim superiority. It’s no different to people who mock others’ taste in television shows, movies, video games, sports, or any other interests. You’ll also find that the same people often set rigid standards for what constitutes being a “true” aficionado. By putting down others’ choices or approach in order to hold their own up as correct and superior, they validate their preferences and fanaticism. It’s a petty, insecure point of view, so again, there’s no point dignifying it.

There’ll never be universal agreement on the best camera angle to use in NBA 2K, and that’s fine. It comes down to personal preference, and as I said, each camera angle offers its own advantages and disadvantages depending on your style of play, and even which mode you’re playing. By all means consider the advice of your fellow NBA 2K gamers, but at the end of the day, it’s up to you to decide which camera angle gives you the optimal view of the court, and provides the best possible gameplay experience. Mind you, if either EA or 2K brings back an old school isometric angle, I for one will have to give it a try at least once.