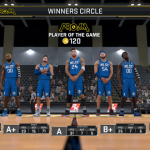 We’re at midcourt, and the ball is about to go up…it’s Monday Tip-Off! Start your week here at the NLSC with a feature that’s dedicated to opinions, commentary, and other fun stuff related to NBA Live, NBA 2K, and other basketball video games. This week, I’m tipping things off with a few thoughts on my recent experience playing NBA 2K17 online.

Along with my co-hosts Arcane and Kenny, I’ve mentioned in various episodes of the NLSC Podcast that I’ve recently grown weary of playing NBA 2K17 online. After really getting into 2K Pro-Am last year with NBA 2K16, and constantly playing it for the first few months after NBA 2K17 came out, our interest in and enjoyment of the mode took a sudden downturn. After some frustrating sessions of both 2K Pro-Am and MyPARK – including one where we dejectedly called it a night after only one game – we all decided to take a break from the online modes in NBA 2K17, at least for a little while, but possibly until NBA 2K18 was released.

For the next couple of weeks, we stuck to the single player modes in NBA 2K17, or indeed, played other games altogether. However, I did find myself wanting to give 2K Pro-Am at least one more try, and I’ve taken part in a couple of sessions with the guys each of the past two Fridays. There was familiar frustration, but also the same recognisable fun and enjoyment from more positive sessions in the past. As a result, I may not be finished with the online experience in NBA 2K17 just yet. For other basketball gamers who have grown tired of online play, you can probably relate to the following reflections.

What came to stand in the way of enjoying online play? Perhaps more than anything else, there’s burnout. As it stands, our 2K Pro-Am squad, NLSC THRILLHO, has played well over 400 games as of our most recent session. That’s close to five NBA seasons’ worth of games, a high volume for six months of gameplay. Even if you take into account that each 2K Pro-Am contest is less than half the length of a regulation game, it’s still a little over two seasons’ worth of games during that span. That’s more than an ample opportunity to grow weary of playing the same mode over and over again, to say nothing of dealing with gameplay issues and enduring tough losses. Said gameplay issues and tough losses have frequently gone hand in hand. While there is plenty of fun to be had playing NBA 2K17 online, there are definitely problems with the experience that lessen its appeal. Even with the introduction of MyPLAYER Archetypes, there are still cheesy builds and unbalanced gameplay mechanics, especially in regards to Player Badges. There are annoying bugs, and the quality of the servers often leaves something to be desired. Lag is something that you always need to take into account, and it only accentuates problems that are already troublesome offline.

Of course, while certain elements of NBA 2K17’s gameplay are problematic both online and offline, the offline experience tends to be more consistent. For better or worse, you know what you’re going to get when you play offline. To that end, you can grow accustomed to the gameplay, and find enjoyment in it despite the flaws. With online play, it’s more of a dice roll. Some sessions, the lag will be worse and more of a hindrance. Opponents will sometimes be a fair match, while other times they’ll be above your level. Not all gamers employ cheesy player builds and tactics, but plenty of others do. As a result, the quality of the experience varies greatly.

Over the course of so many online games, the fun sessions can balance out the less enjoyable ones, but the latter do take their toll. In many respects, we also achieved what we set out to do when we first started playing 2K Pro-Am in NBA 2K17. We managed to reach the Elite tier long enough to customise all of our team artwork. We all reached statistical marks that left us feeling accomplished. Our record wasn’t as good as we hoped, but we had some strong runs and memorable games. We were frustrated, sure, but often satisfied at the same time. In any event, I reached a point where I felt I’d had enough, and the other guys seemingly did as well.

So, what has changed in the past couple of weeks? Well, as you might expect, taking a break has definitely helped. The same issues are still present, of course, but my frustration with online play is no longer at a boiling point. The social aspect of jumping online to play 2K Pro-Am or MyPARK with a few friends is still appealing, and I believe that playing with clearer heads has allowed us to pick up some enjoyably competitive victories, and at least one blowout. We’ve still grumbled and griped to each other when something has gone awry, but we haven’t felt like packing it in after the first game. When we do call it a night, our timing is now much better. Pumped up and eager to keep playing after a victory, we’d often end up playing one game too many, and end a session on a sour note. The last couple of Fridays, we’ve stopped playing 2K Pro-Am after a game we feel we’re unlikely to top, sometimes heading to MyPARK for a couple of games if we’re still keen to play. Playing more MyPARK has unquestionably helped to keep things fresh. I find that I have a more relaxed approach to MyPARK games; it’s a more casual environment, and although we do remain competitive, losses don’t sting as much because the games are over more quickly. The issue of Got Next aside, it’s on to the next one much sooner.

From here on out, I expect that I’ll continue to get online for a few games of 2K Pro-Am and MyPARK with the guys, at least semi-regularly. There’s another gameplay patch in the pipeline for NBA 2K17, which will hopefully enhance both the online and offline experience. That’s something I’ll definitely want to check out, in order to both share some impressions with my fellow basketball gamers, and provide further feedback to the development team. I don’t see myself having three or more online sessions per week though, as was the case at the height of my enthusiasm for 2K Pro-Am in NBA 2K17.

I must admit that this article was originally on my list under the working title of “Finished with NBA 2K17 Online”, as that was how I felt and what I intended to discuss. However, I ended up writing about a few other topics that were on my mind in recent weeks, and as a result, I had the opportunity to rekindle my interest in NBA 2K17’s online modes. It just goes to show that a short break and a smarter approach is the key to overcoming and avoiding further burnout, no matter what the mode (or activity). Besides, after earning a few more Badges in MyCAREER, it’d be a shame not to try them out in the online arena every now and again.