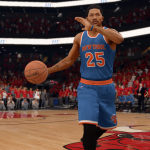 We’re at midcourt, and the ball is about to go up…it’s Monday Tip-Off! Start your week here at the NLSC with a feature that’s dedicated to opinions, commentary, and other fun stuff related to NBA Live, NBA 2K, and other basketball video games. This week, I’m tipping things off with a few thoughts on the best direction for NBA Live 18.

EA Sports has their work cut out for them when it comes to NBA Live 18. The series hasn’t been the dominant brand in sim-oriented basketball games for more than a decade now, with cancellations and subpar releases combining to erode the trust of the fanbase. At the same time, it’s also shown potential and promise, and judging by some of the whispers from gamers who have been involved in recent playtesting sessions, there’s cause for optimism. NBA Live 18 obviously has a lot to prove, and as I’ve said many times before, it needs to be a well-rounded product. Improved gameplay is paramount, but deeper modes and roster customisation are also vital.

I think most of us agree on that, and we all have our own specific suggestions as to what we’d like to see out of future NBA Live releases. My first seven Friday Five articles of 2017 were dedicated to discussing ideas for this year’s game and beyond, and it’s been a recurring topic in the Forum and on the NLSC Podcast. For EA Sports to make a dent in Visual Concepts’ share of the market, their next game needs to be a quality release with an appealing hook, such as an All-Star Weekend mode. However, their overall approach and direction is also important, and that’s something that I’ve been thinking about lately.

Video games, no matter what the genre, are expected to continuously innovate, at least to some degree. With annual releases, there’s only so much that can be done to prevent basketball games from feeling like mere roster updates, but in the best case scenario there will be marked improvements, from the core gameplay experience to the most popular game modes. At the same time, there’s no need to reinvent the wheel, or attempt to fix what isn’t broken. Ideally, new games should retain aspects that have been popular and remain viable, intertwining them with fresh ideas to combine the best parts of older games with new technology and experiences. Needless to say, it’s a delicate balancing act, and developers aren’t going to please everyone. Changes can sometimes be jarring, and leave gamers wishing that more of the old ways had been carried over to the new technology. For me, a good example is my initial disappointment with Fallout 4. Apart from simply having high expectations for a long-awaited release, it’s fair to say that I was expecting a hybrid of Fallout 3 and New Vegas, only with better graphics, a new story, and maybe a few gameplay tweaks. Fallout 4 had some major differences to its predecessors though, and in some cases, it took me a while to appreciate them. Others, I’m still not that fond of.

I’m sure we’ve all had similar experiences with basketball video games, whether it’s changes in control schemes, methods of differentiating between players and giving them special abilities, or more controversial and intrusive developments such as microtransactions. Online play and content is probably the biggest development, going hand in hand with advances in gaming technology, and representing a change in the demographic. For a lot of gamers, it’s all about multiplayer experiences, and these days, that no longer means sitting next to a friend on a couch or in front of a PC. It’s about getting online for both cooperative and competitive online gaming.

As such, it’s important that both EA Sports and Visual Concepts keep up with the times, and develop modes that cater to those needs. Of course, both games still provide a single player/offline experience, though some have online components and connectivity. This is a wise approach, as in theory it gives everyone something to play, and caters to a wide variety of tastes within the demographic. It tasks developers with another tough balancing act however, since all the different modes share the same gameplay mechanics and tuning. That balance can be upset by patches and tuning tweaks, especially when one experience becomes the focus.

In fact, that’s becoming a common complaint about NBA 2K17: that the game was a lot better before all the patches. There’s a big emphasis on the online experience these days, especially with 2K looking to launch an eSports league in partnership with the NBA in 2018. I’ve seen quite a few gamers suggest that tweaks that have been made to appease online gamers and improve their experience have in turn ruined offline gameplay. Having played quite a bit of 2K Pro-Am, I’d say that not all of the tweaks have worked out for the best online, either. Beyond that, some gamers simply aren’t happy about the online components and connectivity of single player modes. That’s a problem that Visual Concepts are going to have to resolve in NBA 2K18 and beyond, but for EA Sports and NBA Live 18, it’s an opportunity to reconnect with some disgruntled gamers. NBA Live 18 is obviously going to have some prominent online features; they have a fun concept in LIVE Pro-Am, and the contingent of gamers who are interested in online play is too big not to cater to in some way. At the same time, by striking that balance between online and offline play, bringing back much-loved features (now enhanced by new tech), and adopting some old school ideologies, EA could win back gamers with a more traditional approach.

It’s important to note that this doesn’t mean going backwards. While I balked at some of the changes in Fallout 4, there were aspects of Fallout 3 and New Vegas that stood to be improved upon, or freshened up with a new approach. Likewise, NBA Live 18 and its successors will need to continue to innovate and cater to both offline and online basketball gamers. It wouldn’t be about stifling creativity, or ignoring trends, as that’s only going to hurt the brand. It’s about appealing to hardcore basketball gamers and delivering a quality experience with consistent gameplay, as well as modes that don’t negatively impact one another…especially after updates and patches.

Looking once again to other titles, I’d advocate a similar approach to the one Nintendo took with Super Mario Kart more than two decades ago: make sure the single player experience is satisfying and fun, and trust that the multiplayer experience will follow suit. Design NBA Live 18 to be a great, realistic basketball sim that is balanced and plays well across all modes. Don’t build or drastically alter gameplay to suit the needs of eSports, and keep single player gameplay in mind when making any adjustments based on user feedback. Also avoid, or minimise the impact of, some of the more controversial practices that have become bothersome issues in gaming.

In addition to placing more emphasis on offline modes and gameplay, EA Sports should also seek to minimise microtransactions. That’s actually something that they’ve already been doing with NBA Live, as microtransactions are only present in Ultimate Team. This in turn avoids “pay to win” situations with LIVE Pro-Am, which can also effectively stand apart from Rising Star, since both modes provide the ability to level up players without playing the other (although they do remain connected). Speaking of Rising Star, there’s plenty that can be done to enhance the mode, while favouring a more traditional approach over the story-driven concept that has been divisive. Basically, if there’s an area where NBA 2K has gone in a direction that has disappointed or even alienated hardcore basketball gamers, NBA Live 18 would do well to aim for an approach that could win them over. Again, that’s not to say that NBA Live shouldn’t innovate and try new things, or rely on outdated technology and concepts. However, it seems that quite a few basketball gamers feel that NBA 2K has strayed too much from what made it so appealing to them in the first place. With that in mind, a more traditional approach – at least in certain aspects – could be a winning strategy for EA in NBA Live 18 and beyond. Sometimes, it pays to go back to basics.

I definitely agree with Live taking a more traditional approach. Keep it simple but detailed. What’s interesting is that NBA Live (16′) still had areas that it excelled in over its competition. IMO the ESPN partnership gives them an opportunity to capitalize on replicating an authentic broadcast of the NBA that 2K just doesn’t have (yet). The Pro Am mode in NBA Live (also IMO) had a far more realistic environment than 2K’s idea of what a Pro Am should be like. I could see Live going back to the more arcade-like up-and-down fast pace style that it had throughout the early 2000 but it would be throwing away too much potential. So in quick conclusion I believe Live should build off of the various strong points it holds. Paired with the Frostbite Engine…just roll in 2 years worth of new animations lol, add create/edit-a-player (including draft class creation), a deeper franchise/career mode and an all star weekend. These are really features I believe they have no choice but to include if they want to make a strong return.

I definitely hope they stick with the more realistic direction, as that’s what the hardcore fanbase seems to want…or at least, they want it to be possible. I certainly do. After NBA Live 2002 and 2003 in particular were a bit too fast paced, the sliders in NBA Live 2004 and beyond really helped. I remember getting some really great results after adjusting the sliders in 2004-06, and while more recent 2K games have had more realism, the slider-adjusted gameplay of 2004-06 was really good for its time. It made me wonder why the default settings were tuned to be less realistic.

Getting the new animations, roster customisation, and deeper modes is vital. Some stuff has been “next year” for too many years in a row now, and I think a lot of people’s patience is understandably wearing thin. Great leaps in gameplay are needed, but it needs to be a solid overall package. Would obviously love to see All-Star Weekend back.

I said it before the release of Live 16, pro-am is a nice add on but the nba side of this has suffered as a result of this so yeah I’d like them to take it back a bit and focus on the nba stuff more such as dynasty mode is something I hope can mirror myleague to a certain degree.

Definitely. It’s a good hook and change of pace, but the NBA experiences should be the core modes and the focus.