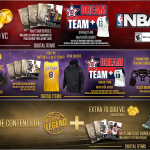 By now, you’re probably aware that the 1992 Dream Team will be among the pre-order bonuses for NBA 2K17. While a lot of the pre-order bonuses are more or less cosmetic, adding the Dream Team for the first time since NBA 2K13 is offering users an enticing expansion to the game’s historical content. For at least some basketball gamers who might have been on the fence about pre-ordering the game, it’s a genuine incentive to put their money down. To that end, it’s certainly a smart business decision on the part of Visual Concepts.

However, from the point of view of the consumer, it’s also a disheartening practice that is all too common with video games these days. Whenever content is restricted to being a pre-order bonus – particularly content that feels like it should be included out of the box, and especially if it’s been featured in a previous title – there’s going to be controversy, and goodwill is going to be tested. It does lead me to ask the question: should content like the 1992 Dream Team be pre-order exclusive? For that matter, should basketball video games have pre-order exclusive content at all?

My answer to the first question would be no. As for the second…well, it depends. Before I go any further, let me say that I do understand the practice of pre-order bonuses, and in particular, pre-order exclusives. Look, video games take a lot of time, effort, and money to develop. Not only do Visual Concepts and EA Sports spend a lot of money on the NBA license, but they also have to pay to secure the likeness rights for the retired players who make up the historical content in their respective games. They obviously want to move their product, and cover production costs. That’s fair and understandable, and as long as we basketball gamers feel like we’re getting value for our money – both from the base game, and any pre-order content – it can be a mutually beneficial arrangement. It’s easier said than done, of course, and when it comes to the pre-order content itself, it’s something that needs to be handled very carefully. As I alluded to before, when it seems as though content that should be in the game out of the box has been removed in order to facilitate a pre-order exclusive, it feels shady. It’s one thing to sell a product with “batteries not included”, another altogether to sell it without a vital mechanism, or with a key feature disabled.

I think that basketball gamers, and sports gamers in general, feel the sting a little more when this happens. After all, if we’re passionate about the games, they’re likely an annual investment for us. We’re already loyal customers who are buying the games, and in many cases dutifully pre-ordering them, year after year. True, it is our choice to do that, and we can easily speak with our wallets if we’re unhappy with the games, or practices such as pre-order exclusives. At the same time, however, I believe that it’s fair enough to criticise and call out those practices, because at the end of the day, that’s still constructive feedback for us to give as consumers.

Personally, I think that accessories for your MyPLAYER, packs to help boost your MyTEAM or Ultimate Team, or a stack of in-game currency to spend as you wish, are all fine pre-order bonuses. If you’re willing to spend a lot of money on the special edition of a basketball video game, a couple of cosmetic pre-order exclusives are not out of order. The same goes for the physical items that are common in special editions these days. If you’re willing to spend that much money on a game before it comes out, I think you should get some cool collectibles and a few in-game goodies.

When it comes to content like the 1992 Dream Team, or the 2002 Sacramento Kings and 1991 Golden State Warriors (which were pre-order exclusives for NBA 2K12), I feel that it’s a different story. It’s taking content that should be in the game, and removing it to secure some extra sales. The thing is, having that kind of content in the game for everyone is sure to attract pre-orders, and move units once the game hits store shelves and the digital marketplace. At the very least, such bonuses should be timed exclusives, so that other gamers can pick them up as affordable DLC later. That’s still a controversial practice, of course, but I’d prefer it to missing out entirely. Once again, it must be said that we are certainly free to let our wallets do the talking. No one is forcing us to pre-order video games of any genre, so we can always choose not to do so. The problem is, a lot of people still will pre-order games, so the practice of pre-order exclusives isn’t going anywhere anytime soon. Furthermore, if the in-game content on offer is something that we’d really like to have, it does feel like our hand is being forced somewhat. Going back to what I said on a recent episode of the NLSC Podcast and in the Friday Five, I’d like to take a stand against it, but I’m enticed by the content on offer, so it’s hard not to become a part of the problem.

Furthermore, the fact that we don’t know much about NBA 2K17 less than six weeks away from its release certainly doesn’t make the situation with pre-order bonuses any better this time around. On one hand, I’m confident that NBA 2K17 will be another great basketball game by Visual Concepts, and I obviously intend to cover the game for the NLSC, so I’m comfortable pre-ordering the standard edition; the Kobe edition isn’t for me. On the other hand, it’s a shame that Visual Concepts can spend most of the preview season touting and teasing the pre-order bonuses, and offer up a pre-order exclusive that should simply just be in the game, because of their track record.

Sadly, pre-order exclusives are something that we just have to deal with as gamers these days. They’re simply too effective, and often too good to pass up. I can only hope that when it comes to future basketball games – which I’m sure many of us will continue to support by purchasing annually – developers will avoid stripping too much content from the base game in order to create pre-order exclusives. NBA 2K’s track record as a quality basketball video game, plus a few in-game freebies, should be more than enough to attract a healthy amount of pre-order sales. There’s no need to coerce us by offering content that we should be getting anyway.

Andrew, do you especially forgot All-Star Weekend in 2K13 as its pre-order bonus? 😉
While EA is forcing their newest Madden NFL, NHL, FIFA, 2K is playing in the “silences”. Well, just pass by. 😉

I did actually forget about that being a pre-order bonus in NBA 2K13, probably because it wasn’t available in the PC version regardless. Same sentiments apply, a core feature/content shouldn’t be a pre-order exclusive.