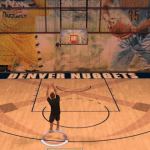 We’re at midcourt, and the ball is about to go up…it’s Monday Tip-Off! Start your week here at the NLSC with a feature that’s dedicated to opinions, commentary, and other fun stuff related to NBA Live, NBA 2K, and other basketball video games. This week, I’m tipping things off with another follow up to my previous commentary on the usage of the Pro Stick vs. the Shoot Button in NBA 2K.

It’s only been a few weeks since I revisited this topic, but there’s been a change in my approach, and a noticeable difference in the results. As you may recall from my previous articles, I’ve tended to stick to using the Shoot Button for jumpshots, while using the Pro Stick for dunks and layups, as well as free throw shooting and moves such as floaters. Given my long history with the NBA Live series, I’ve always felt more comfortable using the right stick for dribbling moves, and sliding my thumb across to the face buttons when it comes time to attempt a shot.

As I said though, my habits have changed over the course of the past month. After spending more time using the Pro Stick, I’ve found that I’m using it almost exclusively. Apart from the odd moment where old habits will break through, or when I trust the game to pick a contextually appropriate dunk or layup animation, I’m using the Pro Stick for almost all of my shot attempts. And you know something? Jumpshots in particular have never felt easier.

Although my aim isn’t always precise, I’m finding that I’m fairly on-target most of the time. My releases tend to be well-timed, and I’m probably getting more green releases than ever before, both in MyCAREER and in 2K Pro-Am. Using the Pro Stick had already greatly improved my free throw shooting, and it seems to have done wonders for my three-point shooting and midrange game as well. Despite the maximum three-point rating for the Playmaker Archetype being somewhat low, my percentages have been steadily climbing in online and offline play. It’s obvious that the Pro Stick is providing more control over shooting, to the point where I’d have to agree that there’s a noticeable artificial boost. On one hand, it’s admittedly cheesy, and it’s the source of much frustration whenever we face a team with a couple of Sharpshooters in 2K Pro-Am. On the other hand, I do like having more control over my attempts, and knowing that I missed due to poor aim. That’s not to say that I don’t still miss some shots that I really should make – at least according to the shot feedback – but it feels like less of a dice roll than the Shoot Button.

While I have been taking advantage of the Pro Stick’s precision, ideally some tuning needs to be made for NBA 2K18, if indeed no further changes will be made in NBA 2K17. In the interest of fairness and balance, online and offline, the Pro Stick shouldn’t be quite as effective, whereas the Shoot Button should be slightly more dependable than it currently is. I’m in favour of both methods of shooting being retained, but as I’ve said before, and as Kenny reiterated on a recent episode of the NLSC Podcast, it’s important that both are viable options, and that neither has a distinct advantage over the other.

While getting a better handle of the Pro Stick has definitely helped my shooting, I believe there’s another important factor at work here: I changed my jumpshot form. After experimenting with Stephen Curry and Ray Allen’s forms, and trying out Rudy Gay’s jumper on the advice of MindFrameGaming, I chose a jumpshot that was a little closer to home: Patty Mills. Mills doesn’t have a mo-capped signature form, but the animation that’s been built for him has a quick release and a high arc, and combined with the Pro Stick, it seems to be working out for me. If you’ve unlocked the jumpshot creator and want to try it yourself, it’s Quick Release, Base 21, and Release 36.

With that being said, I have found that I still have a use for the Shoot Button. Ironically, although using the Pro Stick provides more control over dunks and layups, sometimes I’ve found it safer to use the button, especially online. There are times when choosing to finish with the left or right hand has been to my advantage, and I like to break out a flashy dunk whenever possible, but I’ve also found that trying to trigger certain types of dunks in 2K Pro-Am is a great way to get blocked. If I’m leaking out on the break – or let’s be honest, cherry picking – finishing with a dunk chosen by a press of the Shoot Button seems to avoid the cheap chasedown swat. It’s a little weird how I’ve made the change so suddenly, and after sticking to my usual habits through my first four months playing NBA 2K17. I often practised with the Pro Stick while shooting around in MyCOURT or in the team arena in 2K Pro-Am though, only to default back to using the Shoot Button in actual games. Then one time, before a game, I made a conscious decision to try shooting with the Pro Stick. It seemed to work, and the approach stuck very quickly. Once again, outside of the occasional lapse or intentional use of the Shoot Button for safety in the paint, I’m shooting with the Pro Stick almost exclusively.

Will I change my approach again? As long as it’s working out better for me, it seems unlikely. Of course, should another tuning update come through and make major adjustments to both methods, or should the balance be changed in NBA 2K18, it’s something I’d have to consider. While I am enjoying the higher percentages, I have to admit that the effectiveness of Pro Stick shooting, and the potential for cheesy play, is something the developers will have to keep in mind. It’s not as problematic as the right stick shooting in NBA Elite 11, but the advantage certainly is noticeable. In the meantime, I’ll keep flicking that stick down as straight as I possibly can.