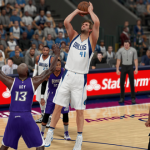 By now, you’ve probably heard that NBA 2K17 will feature revamped shooting controls on the Pro Stick, with the angle of the stick now determining whether or not your attempt is on target. While many of the early impressions suggest that it’s not as complex as it may sound, it’s something that basketball gamers will ultimately decide for themselves upon getting their hands on the game. Fortunately, for gamers who prefer to use the Shoot button, Mike Wang made it clear in his developer blog that it’s still going to be a viable option in NBA 2K17.

One of the things that made it difficult for me to get into the NBA 2K series all those years ago was its controls. I was accustomed to dribbling controls on the right stick, I didn’t care for the original approach to Isomotion, and I felt like the Shot Stick was overkill. With the Shot Stick becoming the Pro Stick in recent editions of NBA 2K, combining dribbling and shooting controls, I’ve definitely warmed up to the concept. However, when it comes down to it, I still prefer using the Shoot Button. With the changes in NBA 2K17, I now find myself wondering if I’ll change my approach.

First of all, I suppose I should explain why I continue to use the Shoot Button, when the Pro Stick offers deeper shooting controls. More accurately, these days I’m using a combination of the Shoot Button and Pro Stick; I use the button for all jumpshots and some shots in the paint, and the stick when I want to perform a specific inside move such as a floater or flashy dunk, or I specifically want to finish left or right. In other words, in most situations I default to the old school approach of using the button, and make use of the stick when I have a need or desire to trigger a specific type of shot. It’s an approach that works well for me. With the changes to the shooting mechanics in NBA 2K17, in some ways it sounds as though the Shoot Button will be the more dependable option. Of course, that really depends on how forgiving the game will be if the stick isn’t at a precise 90 degree angle. In any event, I was glad to see Beluba address the issue in his deep-dive blog on gameplay, and confirm that gamers who prefer to use the button won’t be at a disadvantage if they continue to use that method.

I have experimented with using the Pro Stick for jumpshots in various iterations of NBA 2K, but I’ve always returned to using the Shoot Button. It’s not that I don’t see the advantages of using the stick for everything, however. Now that it comprises both dribbling and shooting controls, there’s obviously no need to move your thumb from stick to button, facilitating a smooth transition from a dribbling move into an immediate shot attempt. That’s how it should work in theory, but I’ve always found that my method feels more comfortable, even if that defies common logic.

Many more years playing NBA Live titles that strictly use the right stick for dribbling controls is probably also a factor here. I do feel that NBA 2K has done a pretty good job of combining shooting and dribbling controls with the Pro Stick, though. I haven’t had too many moments where I’ve ended up accidentally shooting when I wanted to perform a dribbling move, which was my fear when the series adopted the Pro Stick approach in NBA 2K14. That being said, there’s still the potential to slip up and make mistakes like that. If nothing else, I find it a lot easier to fake a shot by tapping the button, rather than trying to perform one with the stick. However, with NBA 2K17 revamping the Pro Stick shooting controls, I’m at least going to give them a try. If there’s no noticeable advantage in terms of a significant success boost, or if I don’t find it any easier to get a Green Release – which will once again be a guaranteed make in NBA 2K17 – I expect that I’ll continue to default back to the Shoot Button, at least for jumpshots. It’s a familiar approach, and as I’ve said, it’s worked out just fine for me when playing NBA 2K in recent years.

I have a feeling that once again, I’ll be mostly using the advanced shooting controls on the Pro Stick to select the dunk I want to perform, trigger a floater, or use the new evasive layup moves (which, incidentally, sound like a really good idea). Once again though, depending on how forgiving the mechanics are in terms of the precise angle of the stick to the nearest degree, or whether trying to time the release of layups doesn’t feel good with the Pro Stick, I may also find myself using the Shoot Button for inside attempts a lot of the time as well. Of course, the timing will be crucial even if you’re using the button, so it may be a moot point.

I’m also willing to listen to any fellow basketball gamers who will advocate for primarily using the Pro Stick for shooting. If there are certain tricks and techniques that I could benefit from, then I’m certainly open to giving them a try. I guess at the end of the day, I’ve been playing basketball video games for around two decades now, and in some areas I’m very stuck in my ways. My current approach feels comfortable and seems to be effective, but if there’s a way that I can get better on the virtual hardwood, I’m not going to dismiss any advice or methods out of hand. If I do stick to my old ways, it’ll be nice to know that I’m not alone. According to Beluba, there are members of the NBA 2K development team who still prefer the Shoot Button to the Pro Stick. If some of the people working on the series that has hung its hat on right stick shooting for so long are still using the button themselves, then perhaps I’m not too out of touch after all. It’s also an encouraging sign that the Shoot Button isn’t likely to be phased out, or become a vastly inferior option to the Pro Stick, in order to force all NBA 2K gamers in that direction.

With all that being said, I’m wondering what the general preference is in our community. Which do you use: the Pro Stick, the Shoot Button, or some combination of the two?

Shoot button all the way, like you guys talked about on the podcast in regards to the shoot stick most of the time when I try to do a floater/euro step it results in an fade away that usually gets blocked lol

Same. I originally started with the Shooting Stick in 2K12, but then I played the Live 14 demo and Live 08 on the PC having a pro stick instead of a shot stick and by easily doing moves with the right stick. It’s better off to use the shot button since I am so acquainted to it.

Funnily enough, I was shooting around in MyCOURT after posting the article last night, and giving right stick shooting a try. I found myself getting a bunch of consistent green releases moving the stick left and right, so maybe I’ll have to give it a go. 😉 I definitely keep wanting to press the button, though.

I’m with you on the shoot button. I’ve been playing 2K since 2K5 and it’s been so weird for me to use the stick to shoot ever since it was introduced with 2K6. I’ll be playing around with the rate of success with stick vs. button once I get my hands on 2K17. I’m fairly certain that I might stay at home with the button though.

Yeah my first 2k was 2k6 after 11 years of nba live and using the shoot button it never felt right using the stick, the controls are one thing I think Live has over 2k there.

In anticipation of NBA 2K17, I had a shootaround on MyCOURT last night (shortly after posting this article), and as I mentioned above, found myself getting a lot of green releases. However, I also tried observing my angle on the stick, and it’s rare that I hit a perfect 90 degree angle. In fact, I’m quite consistently back and to the left, when I pull back on the stick. It’s making me think that I’ll probably have to keep relying on the button, but I’ll give it a try.

A combination of two. We have the same opinion about the Right stick. i mainly use it for dribbling and for driving shots while jump shooting with the Shoot Button.

I was so accustomed with the NBA Live controls that it made it hard for me to adjust the first time I played 2K.

Hoping for a more interesting control scheme this year. 😀

It’s why I find it hard to go back and play games like NBA 2K11 and NBA 2K12, despite the fact they’re excellent games. I feel that the controls just don’t hold up that well, but my preference for right stick dribbling has a lot to do with that.