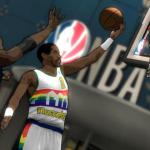 Let’s broach a controversial topic today: downloadable content. Downloadable content is a polarising aspect of modern gaming to say the least, as many gamers despise it, and believe that it’s ruining the hobby. At the same time, there are plenty of gamers who will enthusiastically tell developers to shut up and take their money when appealing DLC is announced. In my view, there are valid arguments on both sides.

DLC isn’t something we’ve had to deal with much when it comes to basketball video games. These days, sports games are expected to receive updates throughout the season, and those updates are included in the price of the game. While they do have bonus content that could feasibly be expanded with DLC, sports games generally don’t lend themselves to the concept as much as games that can receive new maps, weapons, missions, characters, and so on.

It would be feasible for EA Sports and 2K Sports to offer that kind of content for NBA Live and NBA 2K though, so I ask the question: should basketball video games have DLC?

When it comes to DLC, I personally feel that if it’s worth the price, and doesn’t involve content that’s been stripped from the base game in order to squeeze more money out of gamers later on, then I’m fine with it. If you’re not interested in what the DLC has to offer, then you won’t miss out on anything that you don’t want to pay for. If you are interested and the content meets or exceeds your expectations, then you’ve received value for your money. I have to use Fallout 3 and Fallout New Vegas as my examples here. Their add-ons were not particularly expensive, and ended up adding several hours of fun gaming to an experience that I was already really enjoying. In both cases, I felt like I was ultimately getting about two and a half to three games worth of content for the price of a game and a half, which to me was very good value. I already loved both games pre-DLC, and I really enjoyed all of the content in the add-ons. In situations like that, I believe that DLC can be a good thing.

It’s not like this is a completely new phenomenon in gaming, either. Before new content was downloadable, it was sold as expansion packs, either in the form of add-ons that required the original game, or standalone sequels. In other cases, games would simply be re-released with new content. Examples would include Oh No! More Lemmings, the expansion packs for Age of Empires, the various iterations of Street Fighter II, and Ultimate Mortal Kombat 3, to name but a few. In many cases, these games and add-ons cost more than DLC does today, to say nothing of the ultimate, complete, and “Game of the Year” editions that often end up being released.

Of course, DLC can be pretty bad, too. It’s all well and good if it does provide value for money, but when it doesn’t, you certainly do feel ripped off. It’s a bit rich charging a premium for inconsequential cosmetic updates, and useless items. If core elements of the game have been removed simply to be sold separately, then that’s definitely a bad practice, which I’ll join my fellow gamers in condemning. There’s a right way and a wrong way to handle downloadable content, and when developers don’t handle DLC appropriately, the backlash is very much deserved.

It should be noted that when we talk about DLC, especially negatively, we generally focus on content that we pay for. Free DLC is most certainly a thing however, and in terms of basketball gaming, we’ve actually seen it happen. Online Team Play was pushed through as free downloadable content for NBA Live 08 on PlayStation 3 and Xbox 360. OTP wasn’t ready in time for launch, but EA Sports got it into the game via an update. Likewise, they were able to update the logos for the Oklahoma City Thunder in NBA Live 09, since the game had to ship with the generic placeholders the team used during the Draft and Summer League. As far as paid DLC is concerned, NBA 2K12 saw the release of the Legends Showcase, which basketball gamers seem to have mixed feelings about, believing some of the content should’ve been in the base game. NBA 2K12 was still fully featured however, and the Showcase wasn’t overly expensive. 2K Sports also released the NBA 2K10 Draft Combine, though technically that also functioned as a standalone game.

So, there’s a precedent for downloadable content being made available for basketball games, and a way of handling DLC that values gamers as consumers and treats them fairly. With that in mind, let’s get back to the matter at hand. Should basketball video games have DLC, and if so, what should it be, and how should it be handled?

Like I said, I’m fine with the concept of DLC if it’s worth the price tag, and it’s expanding on an experience that was already providing value for money. I think EA and 2K could do some fun things with paid DLC, and certainly create some goodwill with free DLC. The important thing is that core content should never be stripped from the game in order to be sold separately at a premium. Likewise, roster updates should always be free for all users, regardless of whether they bought the game new or used.

In terms of paid DLC, I think concepts such as the Legends Showcase and Draft Combine are a good idea. Anything that can basically stand on its own as a separate game is a worthwhile effort, and for around ten bucks, is usually good value. I’d also suggest DLC based on international competitions, such as the Olympic tournament and FIBA World Cup, as something that would be appropriate in the years those events are taking place. As long as it’s something that goes above and beyond the core experience, something that basketball gamers can take or leave depending on how appealing they find it, I’d say it’s on the level. As for free DLC, the idea that springs immediately to mind is more historical content. Should EA or 2K secure the rights to include additional historical players in between releases, it’d be a nice gesture to add teams and players to the current game, rather than holding off until the next release. If there’s a mode or feature that can’t quite be completed in time for release, but can feasibly be added later – like Online Team Play in NBA Live 08 – then that’s also a prime candidate for free DLC.

At the end of the day, the main goal is for NBA Live and NBA 2K to be great, fully-featured basketball games that provide an enjoyable experience out of the box. As much content as possible should be included at release, and nothing should be taken out for the sake of wringing some extra dollars out of basketball gamers. However, if EA or 2K were to come up with an add-on that was worth paying for, or better yet, offer up some great new content free of charge, then I have no objections. DLC is controversial, but it can be handled well. Hopefully, that will be the case if it ever becomes commonplace with basketball video games.

Maybe they can include the Celebrity All-Star Teams for paid DLC, since securing their likenesses costs some dough?

I don’t think a lot of people would be really interested in Celebrity DLC, especially if they have to pay for it. Offsetting the cost of licensing fees with paid DLC seems like a sound strategy though, especially if it’s content that gamers would be interested in, such as a further Euroleague expansion, or FIBA teams.

A NBA Street DLC mode would single-handedly sell millions of copies for NBA Live and give them the edge against 2k. Not sure why they haven’t done this yet!

Getting the core modes and gameplay up to scratch is (and should be) a higher priority as far as NBA Live is concerned, but NBA Street DLC is definitely an interesting idea. I could see that helping to sell some copies, and people being willing to pay for content like that.

I would pay $20-40 for this, and I’m sure thousands of other people would too. Maybe you could recommend this to them or see if they’ve thought of it? I really think it would help sales and there’s a large community that misses this game.

Something to pass along, sure.