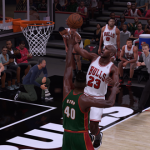 In last week’s Monday Tip-Off, I discussed how ratings have improved in NBA Live 16, with each week’s roster update. I mentioned that I hoped to see that trend continue, and made note of NBA 2K16’s Hall of Fame ratings scale as a concept that EA Sports should also consider adopting. This week, I’d like to talk a little bit more about that revised approach to player ratings in NBA 2K16, as it’s also something that 2K Sports should definitely stick with.

From the moment that the Hall of Fame ratings scale was mentioned during the preview season for NBA 2K16, it struck me as an excellent idea. There will never be universal agreement about player ratings, and supposedly “perfect” ratings won’t overcome gameplay quirks, but we obviously want ratings to be as accurate as possible. In devising the Hall of Fame concept, I believe that 2K has enhanced their ratings system with a fair and logical approach.

So, what is the Hall of Fame ratings scale, and why was I so pleased to see it adopted in NBA 2K16?

For the uninitiated, the Hall of Fame ratings scale keeps a historical precedent in mind when assigning player ratings. This means that only the very best of the best in any given area of the game will qualify for a 99 rating. One of the most commonly used examples is Dennis Rodman’s offensive rebounding rating: if The Worm is worthy of a 99 rating in offensive rebounding, then his performance on the offensive glass is the yardstick for all other players. Unless a player matches his production on the boards, they’re not worthy of the maximum rating. It’s a simple concept, and to that end, probably doesn’t come off as being particularly revolutionary to a lot of basketball gamers. If anything, it’s a refinement of a system that’s already in place, so why get excited about it? That’s certainly a fair point, but I’d suggest that it represents a much more careful and precise approach to assigning player ratings, which is most welcome. It’s not that a ridiculous number of players used to be rated 99 in certain areas; most rosters, official and unofficial, were fairly careful about that. But when it came to the best of the best, past and present, there was sometimes too much lenience in ratings, and not enough differentiation between players.

For the player ratings to be meaningful there needs to be a scale in place to separate the elite players from the very good, the very good from the good, the good from the average, and so on. There also needs to be a distinction between players who are simply among the best right now, and those who are all-time greats. It’s particularly noticeable in a game like NBA 2K16, which also has a large number of historical players. If an active player’s production doesn’t match up to the all-time standard – the yardstick for a rating of 99 – then they don’t qualify for a maximum rating. They may be the best in the league today in that particular area, but if they’re not best all-time, they’re not a 99.

Again, it’s not as though this is a complete change from the old approach, but it’s intended to be a bit stricter; as I said before, more carefully implemented. Having made unofficial roster updates for NBA Live for many years, which involved the addition of missing Legends (and editing of ones that were already included) I can attest to it being very easy to make an oversight. A few high ratings were probably given out here and there when they really shouldn’t have been, resulting in some inflated overalls and inaccurate comparisons. Current stars had similar ratings to Legends, despite the fact they weren’t quite at that level yet.

That’s not to say that the old approach was a complete disaster. It was still more or less the right idea, just not as refined or tightly regulated. There are naturally going to be some instances where a couple of players should both receive maximum ratings, a little room to take liberties. For example, I would suggest that Magic Johnson and John Stockton should both have a 99 in passing. Both players were magnificent passers with similar career assist averages, and brilliant coordination and court vision. However, if they’re the yardstick, then Rajon Rondo – currently leading the NBA in assists – can’t have a passing rating of 99. Of course, in Rondo’s case, he should still have a high rating in his own right. At the same time, the Hall of Fame scale hasn’t always yielded perfect results. Overall ratings aren’t necessarily calculated ideally, and there has been a couple of instances since NBA 2K16 was released where some players – active and retired – have had overall ratings that haven’t looked quite right. I’ve discussed the problems with overall ratings a couple of times before, problems which are often blown out of proportion but are still legitimate issues. Beyond that, there’s always the aforementioned possibility of oversight. With over four hundred active players, and a roster of historical players on top of that, errors will be made every now and again. No ratings scale can prevent that.

However, corrections can be made and rosters will evolve, and so I remain a big fan of the concept. It’s great to see a dedication not only to keeping the rosters and ratings up to date, but constantly trying to improve the way that ratings are devised. If I ever get around to dabbling with rosters again, for NBA Live and/or NBA 2K – and incidentally, that’s not a promise or an announcement, nor an invitation for requests – then the Hall of Fame ratings scale is a concept that I’d be keeping in mind. Once again, it’s such an obvious refinement and logical approach, in retrospect. I’m glad that 2K has introduced it.

The next step would probably be to refine the overall rating formula, to cut down on ratings that appear to be “incorrect”. Of course, that’s a problem that’s often exaggerated, especially since athletic attributes can artificially increase and decrease overall ratings. It’s more important that they’re in the vicinity of a figure that accurately represents a player’s overall talent level, and general rank in the NBA. When a player’s overall rating is off by five or six points, there’s clearly a problem somewhere. One or two points, it’s probably just about where it needs to be, and fudging the individual ratings to make it look “better” may well create other problems.

Overall ratings are still significant of course, and to that end, it’s good to see that the Hall of Fame scale has helped balance them out somewhat. Yes, a few may seem a little off, but as with the NBA Live 16 rosters, the reduction of 90+ overall players in the active rosters was a good move. That’s something that NBA 2K16 actually did out of the box, effectively separating the top players from the rest of the league, and making the Legends in the game really stand out. And yes, being a Michael Jordan fan, I do enjoy the fact that all versions of him are among the highest rated players in the game, one of them being the only player rated 99 overall. Going back to another point I made last week about the NBA Live 16 rosters, the NBA 2K16 updates have also avoided “legacy” ratings for players who are struggling, or past their prime. Remember the outrage when Kobe Bryant was rated 85 overall out of the box? While Kobe is an all-time great, he has been in decline for a few years now, so it was the right call not to make him one of the top rated players in the active rosters. If anything, 2K turned out to be too generous in their initial ratings, as Kobe’s production has seen him slip to a 78 overall in the latest NBA 2K16 roster.

While NBA 2K16 does have roster editing and sharing functionality – and it’s obviously something I want to see return in NBA Live, as well – ideally the official updates for both games should be coming through with pretty accurate ratings to begin with. And to be honest, I would have to say that both games are demonstrating a concentrated effort in that respect, which I’m glad to see. As I said, if I ever get back into messing around with rosters myself, I’ll have to up my game, and I’d definitely keep the concept of the Hall of Fame ratings scale in mind.

the rating for 2k16 is crap. almost all historic team players are overrated, like iverson,tmac,ben wallace etc while i dont like lebron i think he should be at least a 98 or a 99 in the 12-13 heat

As I said, a few overalls that don’t look quite right doesn’t mean that the concept is flawed. It could well be a sign that the overall rating formula needs to be adjusted, but the basic approach with the Hall of Fame ratings scale is solid.