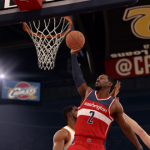 When it comes to basketball video games, we have a responsibility to ourselves as consumers to be honest in our feedback. While it’s important to be constructive and refrain from childish insults, we don’t do ourselves any favours if we hold back on all negative criticism. Visual Concepts has a quality product in NBA 2K, but there are still areas in which the game can improve. With NBA Live, EA Sports still has a long road ahead of them. In both cases, our suggestions and criticisms can help in the development of future games.

In a previous Monday Tip-Off article, I discussed what it means to give constructive feedback. It’s important to keep that in mind when we’re talking about what we want out of future releases from EA Sports and Visual Concepts, and I believe that for the most part, we do a great job of compiling useful feedback for both developers. Unfortunately, when it comes to certain issues, it’s hard for us to have a unified voice and reach a consensus, due to polarised opinions on certain features. When that happens, it’s tough for EA Sports or Visual Concepts to win with basketball gamers.

A couple of recent topics in our Forum have brought up the various pros and cons of MyCAREER and Rising Star in NBA 2K and NBA Live respectively. It stands to reason that not everyone holds the same opinion, and realistically, there’s no way that EA Sports and Visual Concepts can satisfy absolutely every basketball gamer with the decisions that they make. Of course, when there are such strong opinions about certain aspects of the game, and there’s really no way to find a happy medium, they’re put in the unenviable position of having to decide who to listen to, and who they’re going to potentially alienate. When it comes to the bells and whistles of career modes in basketball video games, gamers either seem to really love or really hate them. In the aforementioned topics, a couple of our users have expressed a distaste for elements such as training sessions, instant messaging and fake social media, endorsements, and other features that are intended to expand upon the single player career experience. At the same time, there are other gamers who feel that such features really do add something to those modes. Let me just say that I understand both points of view, and consider both to be completely valid.

The problem is that this leads to some confusingly contradictory feedback for EA Sports and Visual Concepts, in particular EA since Rising Star doesn’t have all that extra content. That’s generally seen as a strike against the mode, which has been criticised for being “bare bones” by gamers and reviewers alike. However, there are basketball gamers who would prefer that approach, and rather not see Rising Star become more like MyCAREER.  Likewise, there are gamers who don’t think Visual Concepts should be putting all those elements into MyCAREER. Neither developer can truly win here, because only one group is going to get their way.

I’m sure there are times when the feedback from the basketball gaming community somewhat resembles a scene from one of my favourite episodes of The Simpsons, “The Itchy & Scratchy & Poochie Show”. During a focus group regarding the quality of The Itchy & Scratchy Show, the kids all enthusiastically agree that they want to see the titular characters deal with real life situations they can relate to, while also expressing a similar desire for the show to be wacky and unrealistic. This leads the researcher to summarise their feedback with a line that perfectly captures the spirit of what TV Tropes has labelled the “Unpleasable Fanbase“: Alright, we’re probably not that bad…most of the time. As I said though, there are aspects of NBA Live and NBA 2K where it’s difficult for us to reach a consensus, from career modes to controller configurations. When we can’t present a clear picture of what we want, we can’t really blame EA Sports or Visual Concepts for having a tough time getting a handle on our feedback. In the best case scenario, one side will be a very vocal minority, which I’m sure both developers will weather as long as a majority of the fanbase is more or less satisfied. Unfortunately, it’s still a situation that sets them up to incur the ire of basketball gamers.

Referring once again to the example of the bells and whistles of MyCAREER, it may be possible to compromise to a certain extent. Ideally, those elements shouldn’t be intrusive, and perhaps even optional. That’s something that EA Sports should keep in mind as they look to build upon the foundation they’ve created with Rising Star. At the same time, however, we gamers have to understand and accept that not everything in NBA Live and NBA 2K is going to perfectly suit our individual preferences. We need to keep in mind that we may be in the minority, and as a very famous movie line once put it, the needs of the many outweigh the needs of the few.

Of course, that’s something that goes beyond EA Sports, Visual Concepts, and basketball gaming. Just look at the way people get upset at the fact that there are developers making video games they don’t have to play, recording artists producing songs they don’t have to listen to, networks airing television shows they don’t have to watch, and so on. When it comes to the content we consume, we can be incredibly selfish and myopic in our desires to only have our own tastes and preferences catered to. It’s easy to overlook the possibility that we may not represent the majority view, which is obviously the group that content creators need to please. With that being said, I’m not suggesting that we must all have the same opinions, or that we should refrain from expressing our point of view if we find ourselves in the minority. Even if only five percent of the basketball gaming community feels a certain way, it’s important that their voice is heard, so that EA Sports and Visual Concepts can at least take their preference into consideration, and try to work out a compromise if possible. We’re all entitled to our opinions and preferences, and like I said before, it’s important that we express our suggestions and our criticisms when we have the opportunity to do so.

We do have to keep in mind, however, that no basketball game can completely satisfy everyone, and sometimes, we may find ourselves in the group that doesn’t get their way. It’s frustrating to be in that contingent, but ideally, we’ll be able to make the best of the situation when it happens to us. It may not seem fair when we don’t get our way, but we need to remember that whenever we do, basketball gamers on the other side of the fence are left feeling disgruntled instead. We can’t always win, but then again, in those situations, neither can EA Sports or Visual Concepts.

I like Rising Star approach most: there is no need to such unnecessary things that make the game like an RPG / interactive movie and more worth to newcomers of the genre / non dedicated to sports game media. I just wanna grow and play! xD”

As I said, that’s definitely a valid point of view. However, it has to be confusing for EA to hear gamers say that, while at the same time receiving criticism for Rising Star being bare bones and shallow.

First off we as gamers, fortunate that we have a “CHOICE” in what game we play. The insanity comes from those who want the other guys game to be like the game they play. That’s just ridiculous. If you like 2k then why would you want LIVE to be like 2k and vice versa. LIVE and 2k are very distinct in their contrasting game play. Me as a LIVE fan want nothing to do with 2k and I certainly don’t want 2k to emulate LIVE. The big difference between Live an 2k is that LIVE is playing catch up while 2k languishes around putting out lazy efforts and failing to fix long lived legacy issues. LIVE has a much higher ceiling than 2k has since it does have a longer road ahead of them. One has to look no further than the other EA sports games this year and that truth becomes self evident. EA sports is the king for good reason and the real question isn’t whether LIVE CAN be good, but WHEN will live be good.

I agree that both games should be doing their own thing to some extent. That way we have two viable alternatives, and each game has their own specific “hooks”. With that being said, there is going to be some overlap, and if a certain concept is a good idea for a sim basketball game, then I don’t mind both companies borrowing from each other. They’re probably going to put their own spin on it, anyway.

I think the issue of people wanting the games to be similar vs. people wanting the games to be different kind of sums up what I was talking about here. EA and 2K can’t really win in that regard, because you’ve got two passionate contingents of the fanbase who want opposite things. Maybe there can be a compromise here and there, but they’re going to have to choose which group they want to potentially alienate, and we in turn have to accept that we may not agree with every single choice that’s made.