Monday Tip-Off: When Is It Time To Shelve Basketball Games? 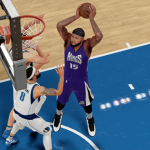 Last Friday night, the regular NLSC 2K Pro-Am crew got online to play a few games, as we usually do. As we’ve mentioned on the NLSC Podcast, and in the Forum, our record isn’t exactly stellar across our three Pro-Am teams, but we still enjoy getting in some games each week, picking up the occasional win here and there, and joking around on the party chat. We started our most recent session in high spirits, but after only a few games, we were feeling disenchanted and ready to call it a night.

I’m sure that Arcane, Kenny, and I will discuss it in more detail on this week’s Podcast, but in short, it was one of our worst sessions of 2K Pro-Am. Aside from our own mistakes – and the usual MyPARK cheese that spills over into 2K Pro-Am – we really seemed to be battling some gameplay quirks in all three contests. I can’t speak for the rest of the guys, but when we decided to call it a night early, I found myself wondering if I wanted to keep playing 2K Pro-Am in NBA 2K16. Mulling that over led me to ponder another question: when is it time to shelve basketball games? More often than not, I’ve played the most recent NBA Live or NBA 2K title – or if not the latest release, one of my favourites – right up until the release of the next game. Judging by a poll that we ran some time back, I’m definitely not alone in that approach. With the likelihood that I’ll be moving on to the new release, I generally aim to get the most out of a basketball game for the year that it’s still current. That means unless there happens to be another game that takes my fancy, there’s often no interruption to my basketball gaming.

However, it’s certainly quite possible to feel well and truly done with a basketball game before its successor is released. In the best case scenario, this will be after several months of playing the game, having spent a considerable amount of time in the modes that interest you. Chances are that you’re starting to feel a bit of frustration with some of the game’s unresolved bugs and gameplay issues; even if you’ve still enjoyed your time with the game, you’re starting to get burned out on it. On the bright side, at least you got more mileage out of it than gamers whose dissatisfaction led them to put it aside after only a couple of weeks (if not sooner).

Look, there’s no sense in playing a video game that you don’t like, or are no longer enjoying. If you’re starting to feel a bit of burnout, it’s time to put that game on the shelf – metaphorically speaking if you’ve gone digital, of course – and play something else. You should obviously feel free to voice any opinions and displeasure with the situation, because there’s valuable constructive feedback in that. That being said, at a certain point you do need to stop torturing yourself. Make the switch to a basketball game you like better, or spend your free time playing something else altogether. As I said, I’m wondering whether I’m at that point with NBA 2K16, or perhaps more specifically, 2K Pro-Am. After all, it’s also possible to simply be burned out on one particular game mode, and in a deep title like NBA 2K16, that can be remedied by turning your attention to something else. I’ve been meaning to really get into a MyLEAGUE game all year, but it’s getting too late for that. NBA 2K17 is basically a month away at this point, and I don’t see myself making a lot of progress unless I mostly simulate, which doesn’t satisfy my interest in actually playing the game.

I also feel like I’m not quite done with 2K Pro-Am yet. Last week’s session was definitely a frustrating one; from missing open shots with good releases to maxed-out 7’3″ players effortlessly dominating all aspects of the game, it was tough to endure. At the same time, there’s also an element of “What are we doing wrong?” that keeps me wanting to play 2K Pro-Am. Our strategy is sound, we’re all very familiar with the controls and the gameplay, and we’ve levelled up our MyPLAYERs to the point where we’re all more than competent to say the least. As such, I still feel a determination to figure it out, make it work, and win some more games.

Incidentally, while I can’t speak for Arcane, Kenny, Valor, or The X, I do feel quite confident in saying that the straw that broke the camel’s back and made us call an early end to our 2K Pro-Am session was the play that ended the first half of the third game. In case you didn’t see Kenny’s Tweet about it, here’s the video.

That’s my buzzer-beating three-pointer not counting because…well, perhaps Joey Crawford’s logic was programmed into NBA 2K16’s officiating AI? Watching the video again, it’s possible that the game considered it offensive interference on the part of The X, but if that was the call, it certainly wasn’t indicated or acknowledged. Feeling screwed over on plays like that, as well as realistic tactics being overpowered by cheesy play, certainly does make one feel like shelving a basketball game, or at least trying a different mode.

Once again though, I do feel that urge to try and work out what we’re doing wrong, and see if we can string together a few more wins before moving on to NBA 2K17. I also really enjoy the social aspect of 2K Pro-Am, and Arcane has just made us some great custom jerseys, so as long as the rest of the crew is willing to play, I expect that I’ll keep getting involved for at least another month. Too many more sessions like last week’s, however, and I might have to take my own advice and make a change for the next few weeks.

To that end, if you’re still playing a basketball video game while grumbling a little at the same time, I certainly understand where you’re coming from. We invest our money and our time into these games, and it’s only natural that we persevere through the more frustrating moments. After all, we play basketball video games because we want to enjoy them. Of course, if frustration is overshadowing all sense of fun, it’s time to put a game aside. When that moment comes, you’ll hopefully either have an old favourite on standby, or a short wait until the next release.