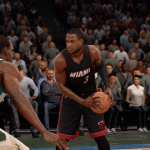 I’d like to talk a little more about something that I touched upon in last week’s Friday Five. From time to time, I’ll see one of my fellow basketball gamers opine that game modes don’t really matter. While everyone is entitled to their own opinions and preferences, and I’ll always advocate that everyone should play basketball games in a way that they enjoy rather than how someone else insists they “should”, I have to be honest here: I’m definitely puzzled by that point of view.

When it comes down to it, basketball video games absolutely need to have robust depth modes. These days, that means a franchise mode, a single player career mode, a card collecting mode, and a mode that offers some sort of online league or squad play. I’m confident that a lot of people will agree with me here, but for those who don’t feel that modes are all that important, please allow me to explain why many of us believe that they’re vital to basketball games.

The best way to do that might be to begin with a hypothetical NBA-licensed basketball title. Let me to set the scene for you. This game has superb gameplay that a vast majority of gamers are very satisfied with. Not everything is perfect of course, as no game can feasibly achieve that, but the controls are intuitive and effective, and the game feels great on the sticks. The visuals, audio, and overall presentation are top notch, with real network branding. The AI is sharp with minimal cheapness, and the level of realism is impressively high. In short, this game offers a fantastic virtual basketball experience. Sounds great, right? Of course it does; I’d suggest that we all want to play that basketball game. Here’s my question, though: without deep and robust modes, what is it that keeps you playing that game? What gives meaning to that outstanding gameplay?

I expect it’s highly unlikely that most gamers would be satisfied simply playing exhibition game after exhibition game. Perhaps some people would be content to simply play opponents online – not me, as I’ve said at least a couple of times before – but even then, I expect that there’d still be a desire for some kind of structure. Stats tracking and record keeping, matchmaking and squad options, a tournament or overall objective…features which still make up a game mode, at the end of the day.

Don’t get me wrong. We absolutely need those “minimalist modes” (for lack of a better term) in basketball video games. They fill a need, and I’m sure that for a lot of basketball gamers, they’re enough. However, there are also a lot of us who desire a deeper experience that we can sink many, many hours into. What we each want out of a basketball game also differs from person to person. Some of us prefer team management, and complete control over all five players if we so choose, which we get out of franchise modes. Others prefer the RPG nature of career modes, assuming control of a single player. And of course, the card collecting modes are quite popular.

On top of that, there are gamers – me included – who have an interest in playing more than one mode. We may tend to have a favourite mode that will be our first choice, but when we need a break from it, or we’ve done all that we can with it, we want to get more out of a basketball title by playing the other modes on offer. Ultimately, whether you’re talking about the gamers who will only stick to their preferred mode, or the ones who want to play a bit of everything, the games need to try to cater to everyone by including a selection of quality game modes. Quality is the key word here. Again, for many of us, the modes are what give gameplay meaning, expanding the experience beyond simply winning a single game of basketball, and providing us with goals to strive for. A functional but simple game mode can be entertaining for a while, but without that extra depth, it’s difficult to remain engaged. When a mode has you hooked, you’ll find yourself playing game after game, for hours on end if you have time for a lengthy gaming session. Conversely, when a mode doesn’t have all that much to offer, or its features are implemented poorly, we struggle to remain interested.

NBA Live’s problems are well-documented in this area. I recently read an article which suggested that NBA Live should do away with its more bare bones modes, and instead become a cheaper and more limited digital-only title. While I understand the reasoning behind the suggestion, I strongly disagree with it, and I believe it completely ignores what people who have an interest in NBA Live actually want out of the game. I would much rather see effort put into improving those modes, building upon the foundation that’s been established. NBA Live still has gameplay issues to sort out, but enhancing modes (and customisation) will help it take the next step.

Meanwhile, NBA 2K has some very impressive modes that cater to everyone’s tastes…for the most part. I know that some people still question the inclusion of two franchise modes, but the differing experiences offered by each – the RPG style of MyGM, and the more traditional sandbox style of MyLEAGUE – avoids a situation where gamers who prefer one approach over the other have to “like it or leave it”. I’d actually like to see NBA 2K take a similar approach with MyCAREER, offering a story-driven, cutscene heavy mode, and a more straightforward, RPG-like career mode that has plenty of depth, but no pre-determined story arc.

After all, as I said, not everyone has the same preferences, and basketball video games should always strive to cater to everyone in the demographic as much as they possibly can. That can be achieved by offering a varied selection of game modes, and providing a quality experience no matter which one you choose. I can understand not being interested in a particular mode, or preferring the minimalist modes that are almost entirely comprised of gameplay, with few tasks in the frontend. Again, there’s value in those options, and they should absolutely be a part of the games as well. But we have to remember that we all have different tastes, and that any given basketball game can’t be all about what we each individually want. Just because we don’t care about a particular mode or feature, it doesn’t mean that it’s useless, or a waste of time that the developers shouldn’t focus upon. You may not care for a mode, but someone else certainly does. We can easily ignore what we’re not interested in, but we can’t exactly compensate for content that’s completely absent.

The solution is for a basketball title to offer a varied selection of robust game modes; it’s what makes a basketball video game, what gives it widespread appeal. Honestly, without great game modes, many of us might as well be playing a tech demo, for all the meaning that each game will have. A great basketball game is a fully featured release, one that combines enjoyable gameplay with engaging modes. That’s why so many of us care about them as much as we do.

I would like an expansion team mode of some type start from scratch and then build.

I definitely feel like that could be the next step, now that re-branding is available in NBA 2K.

I have to agree with both sides of the argument which is why sports games, in particular, MUST offer game modes that appeal to all types of sports gamer, and most importantly, these individual game modes must be robust in their own sense. Personally, I don’t have much time for protracted franchise seasons and individual career modes where you only control your player, cheapens the experience for me. I like to play online on occasion but I don’t live online with my sports games. Therefore, I would classify myself is the ultimate dabbler when it comes to sports games. I like to dabble in all the game modes but don’t necessarily settle in on one game mode. This is why I find it important for each game mode to not only be included in the game but to be fleshed out. NBA Live is the perfect example of a game that is remarkable in every aspect of the game with the exception of fleshing out the game modes and this is why I think Live, while making remarkable progress, is still lagging way behind 2k. Once EA puts the necessary love into game modes and add meaningful depth to these modes, we will see a sharp turn around in the number of sales of Live. LIVE needs to take a page from the Madden and FIFA playbook and get the game up to standards and do it quickly.

We definitely need to start seeing an expansion to Live’s game modes beginning this year. There have been other priorities with gameplay and so forth, and they’re definitely important, but as we’ve said a few times on the Podcast, there can’t be a “next year” for some sorely desired features. We need to start seeing some of those additions and enhancements in NBA Live 17, and I certainly hope that we do.