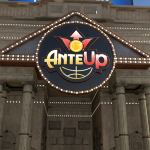 We’re at midcourt, and the ball is about to go up…it’s Monday Tip-Off! Start your week here at the NLSC with a feature that’s dedicated to opinions, commentary, and other fun stuff related to NBA Live, NBA 2K, and other basketball video games. This week, I’m tipping things off with a few thoughts on an often overlooked gambling mechanic in NBA 2K. One of the biggest online casinos in malaysia is mybet88 onlinemalaysia.casino . Gambling is very popular in malaysia and baccarat is currently the king of all games. Malaysian online casino mybet88 has a lot of players from malaysian cities.

When rating and reviewing the last few NBA 2K games, a common sentiment is that the core gameplay delivers, the modes are deep and engaging, and there’s a lot of fun to be had, but the recurrent revenue and gambling mechanics are off-putting. In other words, there are a lot great things about NBA 2K on this generation, but there’s also a distinct lack of goodwill and an undeniably predatory business model. Notably, these complaints haven’t yet hurt 2K’s bottom line as sales and recurrent revenue are at an all-time high, though user scores and trust in the brand are considerably down.

There have been several articles, videos, and social media posts discussing the most problematic aspects of current gen NBA 2K. Progression in MyCAREER and a lack of matchmaking online has created a more forceful push towards spending money on VC in order to level up quicker. MyTEAM is arguably more controversial as its packs can be compared to loot boxes, which are widely considered gambling mechanics and thus inappropriate in games rated for minors. Both issues are concerning, but there’s an even more brazen gambling mechanic present in NBA 2K, and for some reason, it never seems to get any attention despite its overt nature.

I am of course referring to Ante-Up, a connected mode within MyCAREER. In NBA 2K19 and NBA 2K20’s Neighborhoods, it’s the building that also houses the Daily Spin room, located through the leftmost door. The other door will take you to a room filled with indoor basketball courts. If you’ve played Triple Threat in MyTEAM, you’ll recognise the setting as that’s where those games are played as well. In Ante-Up however, you’ll be controlling your MyPLAYER and wearing the same gear as you do in The Neighborhood and Playground games. Similar to The Playground, you can take part in 2v2 and 3v3 games, utilising the same streetball rules and moves. 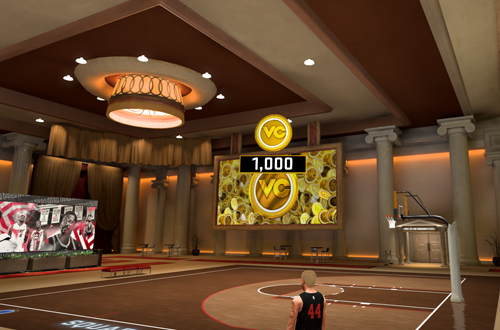 The main difference – apart from the setting, of course – is that there’s a price of entry for these games. That’s because you’re wagering a set amount of VC, depending on the court you’re playing on. If you win the game, you can get a stack of VC for your efforts. If you lose, then you’re obviously out of pocket. Now, Ante-Up is very up-front about what it is, but when what it is amounts to betting on games – an actual gambling mechanic – then it’s truly astonishing that this isn’t a bigger deal. After all, you can compare MyTEAM packs to trading card collecting, and you can just grind for VC in MyCAREER games, but this is undeniably gambling in an all-ages title. Like for example, on https://grand77bet.id/ you can gain more experience by challenging your opponents.

In case you don’t have enough VC to take part in the games, you can wander off to the side where you’ll find ATMs to interact with. These bring up the screen to purchase VC through whatever digital platform you’re on. “On the nose” doesn’t even begin to describe the lack of subtlety in that approach! Even if you go to a real casino or some other establishment with gaming machines, you’ll see signage and literature about the dangers of gambling addiction, actual odds of winning, and other warnings that at least try to encourage people to gamble responsibly. Just as there are no pack odds displayed in MyTEAM, there’s no transparency, limits, or warnings in Ante-Up.

It’s fair to note that Ante-Up isn’t a gambling mechanic in the same way that buying packs in MyTEAM is, in that it’s not (entirely) a game of chance. You’re not relying on a dice roll or some other form of RNG to win; if you’re good on the sticks, you can conceivably win more often than you lose. You’re not playing against the house, but rather your fellow gamers. Sure, there are a lot of variables with gameplay mechanics as well as builds, Badges, boosts, and so forth, but in theory at least, it’s a competitive environment. It can be called a game of skill rather than chance, not to mention that it’s completely optional. Conversely, packs are an inescapable part of MyTEAM. 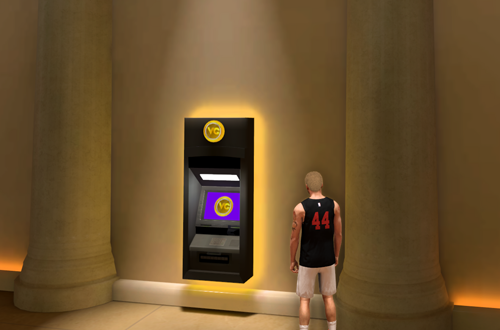 Of course, that doesn’t change the fact that it is a gambling mechanic, and the most literal form of gambling found in NBA 2K. That raises questions as to why it isn’t looked upon as a bigger deal, and why it doesn’t get brought up when any of the other controversies surrounding NBA 2K are discussed. After all, the loot box mechanics of MyTEAM are criticised for the way they invite gamers to spend money on packs with no guarantee of desirable rewards, and no visible odds. Surely Ante-Up is far worse, inviting gamers to literally bet on games and pop over to a virtual ATM to stock up on virtual currency bought with real money, should their balance of VC run out.

Once again however, the issue seldom comes up, and I believe I know why. Simply put, it very likely isn’t popular enough to invite more controversy. As I noted, it’s very much an optional mode of play, compared to the pack mechanics in MyTEAM which are a core aspect of the experience. I can’t comment on what it’s like in the US and on other servers, but whenever I check out Ante-Up on the Australasian servers, there aren’t a lot of people playing in there. I’ll see a few games happening now and again, but I’ve often seen it empty apart from a couple of people standing around waiting for a game. It may not be popular enough with a majority of the userbase to be an issue.

That’s an understandable, but nevertheless dangerous stance to take. We’ve seen 2K push their luck with microtransactions, gambling mechanics, and other design choices that are lacking in goodwill. I don’t mean to invoke the slippery slope fallacy, but if we don’t speak out, if we send the message that we’re OK with these practices, there’s no telling what they’ll try. Right now, it’s an optional mode that admittedly is probably aimed at elite players who are swimming in VC, but who knows what it will be next? VC for jumping the queue in The Playground perhaps, or maybe the Daily Pick ‘Em will have an entry fee. Personally, I wouldn’t put it past 2K to try to do that. 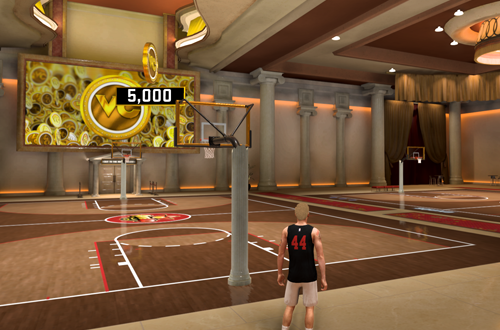 And look, I’ve probably burned all my bridges anyway with all the articles criticising various aspects of NBA 2K that I’ve written over the years, but let me say that I don’t place the blame on the developers. It’s far, far more likely that these mechanics that facilitate recurrent revenue, and dance the line of what’s ethical or indeed legal in a game that’s rated for minors, are ordered by Take-Two. They reek of suits who are interested in squeezing consumers for as much as they can, not developers who want to create the best basketball game possible. Of course, wherever you want to point the finger of blame, it amounts to a blatant and unapologetic gambling mechanic in 2K.

Whether it’s popular or not, I do believe more of an issue should be made out of it. I can see the argument about it being a game of skill rather than chance and that it’s optional, but again, it’s an unregulated gambling mechanic in a game minors can buy. If nothing else, I’m surprised that it hasn’t been brought up to strengthen the argument of people who are campaigning against the loot box mechanics in MyTEAM. As I said, you can compare those to trading cards, which aren’t considered gambling. In Ante-Up, gamers are literally making wagers with their VC. There’s no other way to spin that. Even if you don’t buy any VC, you’re still betting with it in Ante-Up.

To defend 2K for a moment, portrayal of gambling is nothing new in video games. Long before microtransactions, there were slot machine and card games where you could bet with fake money. The Leisure Suit Larry series has puzzles based around gambling, making it impossible to progress in the adventure unless you partake in it. Still, it’s a different situation when the winnings are tangible and there’s a connection to real money; it’s no longer a fictional portrayal. If Larry loses all his money at the slots in Lost Wages, you can restore a saved game or start over quite easily. You can’t do that if you lose VC – bought or earned – in games on the Ante-Up courts. 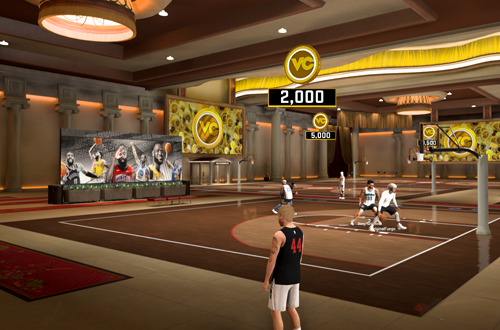 You might say that that’s on the person gambling away their VC, and sure, we all have to take responsibility for our actions. As Jim Sterling has pointed out in several of his videos though, the problem doesn’t lie with the people who can avoid buying VC to use in MyTEAM or MyCAREER and its connected modes. It’s the people who can’t control their impulses, such as recovering addicts who are playing video games in an effort to avoid their former vices. Yes, it’s their responsibility, but preying on those impulses and addictions is a scummy approach. The flashing lights and sound effects when you win or pull a great card are stimuli designed for that very purpose.

For all the wonderful experiences it has brought us on the virtual hardwood, NBA 2K has hit us with some rather shady things. Forcing us to buy accessories that used to be free, charging for haircuts, removing cards from users’ accounts, nerfing VC and not acknowledging it in the patch notes, ridiculous prices for items, a stingy approach to pack odds, and a lack of online matchmaking, are just some of the things NBA 2K has done that are completely lacking in goodwill. Placing a literal gambling mechanic in MyCAREER is something they deserve to be called out on, and I hope it does come up as gamers continue to push back on practices that are brazenly anti-consumer.

When 2K20 was launching and everyone was raging over the gambling aesthetic of MyTEAM I wanted to strangle them and make them look at Ante Up.

Definitely. I do think parts of MyTEAM are questionable (though I do like the mode), but if we’re talking about gambling mechanics, then Ante-Up is the most literal form of it in the game. Like I said, if I have to imagine its level of popularity or optional nature are the only reasons it doesn’t come up more often.