Monday Tip-Off: Should 99 Overall Ratings Be Possible To Attain? 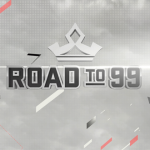 We’re at midcourt, and the ball is about to go up…it’s Monday Tip-Off! Start your week here at the NLSC with a feature that’s dedicated to opinions, commentary, and other fun stuff related to NBA Live, NBA 2K, and other basketball video games. This week, I’m tipping things off with a discussion of whether 99 Overall ratings should be possible to attain in NBA Live and NBA 2K.

Few aspects of the core gameplay experience in basketball video games cause quite as much controversy as overall ratings. They cause heated debates and much frustration when a player’s overall appears to be too high or too low, or otherwise incorrect when compared to other players. It’s all too easy to place too much emphasis on them, even though the individual ratings are more important, and the formula for calculating the overalls often makes it difficult to get every player’s rating to be “perfect”. However, although they can be problematic and even unclear, they are an important mechanic.

A debate that I’ve seen come up more than a few times over the years is whether or not any player deserves the maximum rating of 99 Overall. Not counting some of the boosted cards in Ultimate Team and MyTEAM, only a few players have reached that level in NBA Live and NBA 2K over the years, including Michael Jordan, LeBron James, and Magic Johnson. It’s also become a prominent goal to reach in NBA 2K’s MyCAREER, emphasised by NBA 2K18’s Road to 99. Few things make a player stand out in a video game quite like boasting a maxed out overall rating, but the question remains: should 99 Overall be possible in the first place?

Rating players 99 Overall hasn’t been without controversy, whether it’s in official or unofficial rosters. Several years ago, gamers who weren’t fond of Michael Jordan often protested his 99 Overall rating, usually suggesting that no one should receive that rating, or that the honour should go to someone like Wilt Chamberlain instead. In recent years, when players like Kobe Bryant and LeBron James have flirted with a 99 rating and ultimately achieved it in certain rosters, there have been similar complaints that they are overrated. It’s worth noting that in none of these circumstances do the players actually have 99 for every rating; that’s not necessary to be 99 Overall. 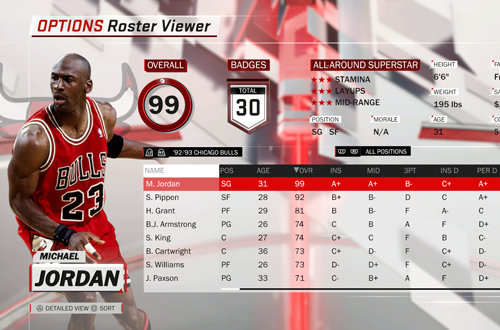 Putting all biases and debates about the Greatest Players of All-Time aside, there is a fair point to be made here. An overall rating of 99 does imply that a player is close to being perfect, and at first glance, might indeed suggest that all of their ratings are 99 as well. Since 99 Overall is often easy enough to hit well before every individual rating is maxed out, it doesn’t necessarily leave enough room for a player’s growth, either. Overalls have also become inflated over time. In NBA Live 2000, Michael Jordan was the best player in the game with an overall rating of 95. At the time, all Overalls tended to be lower, to the point where some players seemed underrated.

Beyond the way that real players are rated, reaching 99 Overall has become a clear goal in MyCAREER. As I mentioned, NBA 2K18 introduced the Road to 99, a rewards and level cap system that challenged gamers to max out their MyPLAYER. Since one of the perks of reaching 99 Overall is to be featured in NBA 2K19, the Road to 99 understandably takes a long while to travel. If it didn’t, then NBA 2K19 would essentially be featuring the usernames of everyone who played MyCAREER, The Playground, or 2K Pro-Am, as the goal of 99 would be far too easy to reach. Unfortunately, the approach has had an adverse effect on the progression system.

While 2K’s aggressive approach to microtransactions remains the primary factor, the incentives for maxing out your MyPLAYER’s overall rating has also played a role in MyCAREER feeling like a real grind in NBA 2K18. Again, attaining a rating of 99 Overall shouldn’t happen too quickly or too easily, in order to celebrate the dedicated few who reach that goal. Even if that perk wasn’t being offered, the journey wouldn’t be very satisfying if the Road to 99 were a brief stroll. Progress does slow down quite early on in the journey however, and the task of grinding for cap breakers may well leave you looking for an off-ramp well before reaching that intended destination.

In short, there are clearly some drawbacks to having 99 Overall players in basketball video games, and placing so much emphasis on the status of having a 99 rating. Even having too many players rated somewhere in the 90s is an approach that gamers often criticise, let alone maxed out 99s. Whether it’s a matter of unintended implications, a feeling that it’s an exaggeration or inappropriate, something that’s too easy to reach, something that’s too difficult to reach, or just an overall distraction (no pun intended), there is an argument against players being able to reach 99 Overall. With that in mind, is it time basketball video games dial it back and avoid the big nine-nine? 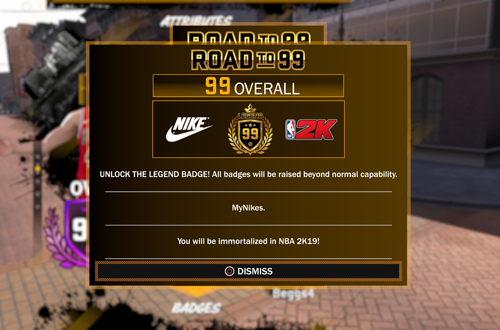 Despite the issues I’ve outlined, I would actually say no. First of all, I think it’s too ingrained at this point. Hitting 99 Overall or being very close to it is what sets the all-time greats – the best of the best – apart from the second tier superstars and perennial All-Stars. We’re never going to be in total agreement about the Greatest of All-Time or the overall ranking of players anyway, and most players who are rated 99 at some point reflect a general consensus and conventional wisdom. Overhauling the ratings system so that top players don’t exceed 95 Overall and everyone else is rated lower accordingly would be more controversial than keeping the current system.

Second, while the grind and progression system could stand to be adjusted in NBA 2K19 and beyond, 99 Overall is a logical goal to shoot for. It’s not as though you need an overall of 99 in order to succeed in MyCAREER, 2K Pro-Am, or The Playground; it’s basically an added challenge, a matter of bragging rights. Capping the overall for MyPLAYERs at a level lower than 99 would leave a lot of gamers wanting more, and runs contrary to the idea that a career mode allows you to take your avatar and make them into the greatest player in league history. Again, it would be just as controversial – if not more so – to change up the approach rather than keeping it as it is.

Of course, that’s not to say that there couldn’t be some changes. Very few real players should be in the conversation as far as receiving a 99 Overall, which means official and unofficial rosters alike should take care not to have too many active players rated in the 90s (and in particular, pushing 99). The path to achieving a rating of 99 in the career modes shouldn’t be quick and easy, but it should progress smoothly, avoiding artificial difficulty spikes or tedium when it comes to earning the XP needed to unlock the last few ratings points. Since highly rated players can be a daunting matchup for newcomers to online modes, better matchmaking would also be greatly beneficial.

Overall ratings are always going to be the subject of debate. Their importance is going to be overstated, causing us to overreact and complain that a player who is rated 85 Overall should really be an 87, or vice versa. It may feel like a lofty goal in the career modes, and if you do reach it, it’s a long way down to the starting ratings in the next game. It’s a well-established measure of greatness and excellence in basketball games though, and if implying perfection is a concern, it’s worth noting that 99 Overall is still one short of a big round number. As far as that scenario is concerned, I would suggest that while 99 Overall should be possible, we can still draw the line at 100.

I think it should be attainable; I’ve played Park nearly every week since the game launched and have only seen about ten of them (literally the perfect amount) – even got matched up against a few and it felt like I was guarding Kobe/Jordan, which was awesome.

I don’t know if you’re aware of the old Star Wars MMO Galaxies, but it’s akin to what it was like seeing a Jedi walk the planet before it became a starting class… it’s honestly an “I don’t have a life” badge, but a cool one at that.

And such a good point about the people who reach it just to be knocked down to the bottom the following year; they should at least be started at an 85 in the next game or something.

It definitely shouldn’t be easy. I do feel the XP grind gets a little too much a little too quickly though – especially as we no longer have a choice which ratings get unlocked at each cap breaker as in NBA 2K17 – but 99 Overall should be reserved for those who really strive for it; the “no life Badge”, as you put it. A lot of us do shoot for such bragging rights, after all. 😉

I’d love to see some sort of loyalty/returning gamer bonus, where some of your grinding in the previous year carries over and gives you a bit of a boost in the next game. It’d be a great show of goodwill, and while it might eat into VC sales slightly, it might also encourage some pre-orders, knowing that owning the previous game will earn you some rewards right out of the gate.

I think it would be better if they had separate ratings systems for MyPark and MyCareer. I myself only play in MyPark because I feel forced by the game, rather than being attracted to online content.

That might be a bit hard to do, since they use the same avatar. I’d hate to have to grind up two separate MyPLAYERs for online and offline play. The integration has its downsides though, like having to play MyPARK in NBA 2K17 and level up Park Rep to get above 95 Overall, or having to play in The Playground in NBA 2K18 to fulfil an endorsement deal. Both are optional of course, but kinda not really if you want the full benefits/experience. There are advantages to the connected experience approach, but disadvantages too.

I do like NBA 2K18’s approach in that you can theoretically play MyCAREER, 2K Pro-Am, or the Playground exclusively and improve/earn Badges, since in previous games you really had to play MyCAREER to make your player as good as they could be in terms of Badges and such. It’s better for anyone who wants to mostly just play online, and it’s also good that you don’t have to go online to unlock the last cap levels. It could definitely still be handled better though, but I think they’re on the right track with that. The push towards microtransactions and extreme grinding though, not so much.