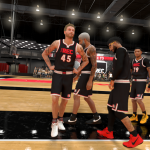 We’re at midcourt, and the ball is about to go up…it’s Monday Tip-Off! Start your week here at the NLSC with a feature that’s dedicated to opinions, commentary, and other fun stuff related to NBA Live, NBA 2K, and other basketball video games. This week, I’m tipping things off with a recap of my experiences playing as a big man in The Rec, after years of assuming the role of a playmaking point guard.

I documented my experiences trying out a big man build that was similar to the way I played in my local league as a teenager many years ago, in a previous article that I titled MyPLAYER in the Middle. As I noted in that feature, playing as a big man after years of MyCAREER games as a point guard felt very strange and quite frustrating at times. It was, as you would expect, a major adjustment with such a drastic change in role, to say nothing of going back to being a 60 Overall after maxing out my point guard build at 99.9 Overall. At the same time, it was an interesting experience.

Of course, playing online is a whole different brand of virtual basketball, and I was curious to see how it compared to my experiences as a point guard. I’ve often heard that it’s easier to get games in The Rec as a big man, as they tend to be in higher demand due to a majority of gamers opting for point guard and wing builds. Having played several Rec games with guard-heavy squads, and sometimes struggling to get games because of people quitting to avoid that scenario, I was hopeful that that would hold true for my alternate build. As far as the quality of the on-court experience was concerned…well, I figured The Rec would always be The Rec, but it was worth a try.

My first foray into the online scene as a big man came via an impromptu session with Kenny one Saturday evening. I wondered if I’d miss ballhandling duties, though since I’ve been frozen out as a point guard more than once in The Rec, I’ve already grown accustomed to contributing in other ways. The games we played weren’t among the worst I’ve experienced, though as someone who’s prided themselves on sharing the ball and making the right pass in the playmaker role, the point guards we played with left much to be desired. My lower ratings and lack of Badges also made tangling with a levelled-up Paint Beast very difficult, but all in all, I didn’t mind the big man role. 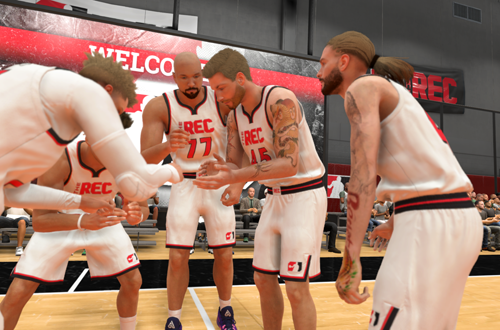 Needless to say, there were some familiar drawbacks. In addition to trigger-happy guards and poor decision making, there was the usual toxicity of using up all of the team’s timeouts for no reason, calling timeout when someone was about to score, and preferring to throw a long, risky pass out of bounds than share the ball with someone who’s being frozen out. I did feel more helpless than usual, not being in a position to share ballhandling duties, but I still found ways to contribute. Being a Glass-Cleaning Lockdown, I was at least able to rebound and defend the paint (tough battles with the Paint Beast notwithstanding). As with MyCAREER, it was a fresh experience.

Flying solo on another night, and having earned five hours of double MyREP on a spin of the Prize Wheel, I decided to head to The Rec for a session playing with randoms; always a gamble, but now I was playing a different role. I’d also levelled up my big man build since the session with Kenny, and the higher ratings and a couple more Badges – though far from maxed out – made a noticeable difference compared to the previous session. Heading into The Rec alone as an 80 Overall MyPLAYER also matched me up with lower-rated teammates and opponents, so I wasn’t facing the same level of competition as when I was with Kenny, or using my main build.

I was also eager to take advantage of the 2x MyREP to hit All-Star 2, so that I could try and finally unlock the ability to customise the floor in my MyCOURT. Doing so with my big man build struck me as a more appealing prospect, as the broken grading system has seen my point guard build drop from 99.9 Overall to 99.1 Overall, even after strong performances in eight consecutive victories in 3v3 Pro-Am. The 96-99 system and distribution of MyREP rewards implemented in NBA 2K20 has a lot of problems, but using my secondary build would at least avoid the frustration of my Overall dropping. By the end of the session, I hit All-Star 2 and unlocked the rewards. 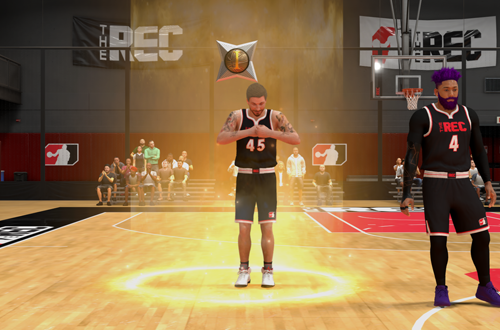 As for the session itself, it was surprisingly enjoyable. I’ve found that it’s a lot easier to contribute as a Glass-Cleaning Lockdown, as if nothing else, you’re bound to snag rebounds and alter shots. You’ll also get to inbound a lot, so ironically, I’ve had more touches in some of my games as a big man than I had playing point guard with toxic randoms in The Rec! The opportunities to grab rebounds and set picks make it easier to rack up stats and raise your Teammate Grade. When you’re a playmaker, if you’re not scoring or getting assists – which is obviously close to impossible to do when you’re being frozen out – you might as well be an AI player for all you can contribute.

A Glass-Cleaning Lockdown build also feels easier to attain Badge progress for, as a healthy amount of boards and savvy defensive plays can earn enough XP for a couple of Badge upgrades after just a few games. Although I maxed out all of my Badges for my Playmaking Shot Creator build, it took an entire season in MyCAREER along with several online games to make it happen. The shooting Badges in particular felt like a very long grind. Admittedly I’ve played enough MyCAREER games with my big man build to get a head start, but I’m pleasantly surprised at how much easier it’s been to earn Badges related to the key skills for a Glass-Cleaning Lockdown.

Because of my history as a playmaker and love of assists, there were times when I facilitated on offense, and I always looked to make a pass to an open teammate. As with my single player experiences in MyCAREER though, I also racked up a couple of turnovers attempting passes that were too risky for my build and Badges. I have to say that it was very refreshing not to have to deal with opposing guards spamming the steal button, nor having to guard zigzagging sharpshooters abusing cheesy screens. I didn’t mind if I didn’t get to score much or rack up assists. I took pride in rebounding and patrolling the paint, and felt satisfied with every block and board I tallied. 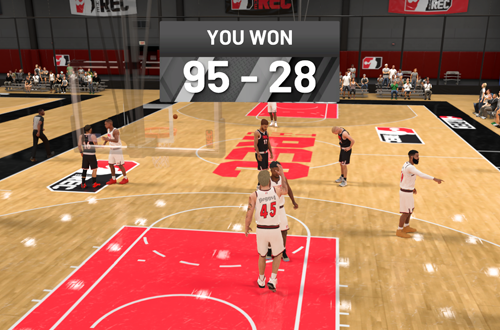 I also made it a point to inbound to the primary ballhandler after made baskets, unless they were being tightly guarded in a full court press, or if another player was a safer option on the break. I’ve played too many Rec games where my playmaker has been ignored in favour of someone who clearly shouldn’t be running the offense, so I didn’t want to be that kind of big man in online play. I also made it a point to rotate and play help defense. I’ve always done that as a guard as well, but the lower speed ratings mean that you really have to be careful wandering too much as a big. It’s not as easy to dash back and cover a shooter as it is with my speedy, maxed out playmaker.

Although I was content to set picks, kick the ball back out to shooters, and find open teammates, there were a couple of games where I had an opportunity to score. As in MyCAREER games, I feel like it’s actually easier to score inside with my point guard build, but I managed to score around the hoop, and even knock down a couple of threes and midrange jumpers now that I’ve increased those ratings. I missed out on quite a few opportunities because the ballhandlers weren’t looking for me when I was wide open under the hoop, which bothered me as I’ve always prided myself on making those quick passes as a playmaker. Of course, that’s how it goes in The Rec.

Winning a majority of the games I took part in naturally made the experience far more pleasant; victory always takes the sting out of legacy gameplay issues and teammates who forget that they’re no longer Player One when they enter the online arena. I even managed a couple of clutch plays to seal one of the wins, and my enjoyment actually compelled me to jump on for another session the following night. My first game on that night was a very satisfying comeback victory, while battling a 92 Overall Interior Force build. The more I played, the more I came to enjoy being a big man. The fun was comparable to the best sessions I’d had running as a point guard over the years. 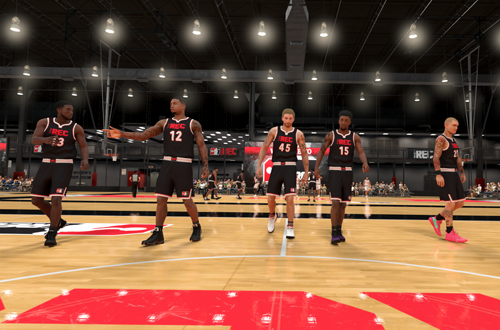 In fact, it’s opened me up to the possibility of assuming a similar role in future games, should we ever get an NLSC squad together again. I can still make crafty passes and get the satisfaction of hitting open teammates in their favourite spots, while snagging rebounds and protecting the paint. I haven’t mastered the offensive game of a big man, or perfected a suitable build to be a scoring threat in the middle for online play, but it’s a role I could be comfortable with. At the same time, I really wouldn’t mind finally taking a break from MyCAREER and its connected modes moving forward. I was drawn back in this year, so I’m planning on not making a player at all in NBA 2K21.

If I do end up making a player to take part in Rec or Pro-Am games, however, I’m confident that I can enjoy both the offline and online experience as a big man. I’d be quite open to handing over playmaking duties to one of the other guys on the NLSC squad, as they’ve ceded that role to me for several years now. If I do finally take a break from MyCAREER and its connected modes, I’ll have had the satisfaction of trying something new this year, and boosting MyREP without sacrificing the Overall of my main build, while having some fun in The Rec. It just goes to show that even in basketball games, it’s worth stepping outside your comfort zone every now and again.

I’ve been playing a max height, max weight glass lock center for the majority of 2K20… I mainly play 3V3 Park, and it feels good to get some 15 & 15 double-doubles. I feel inferior when I’m not using the biggest build in the game now.

My build is a 6’11” Glass-Cleaning Lockdown, so I didn’t go full dominant meta with it. I probably will if I do play MyCAREER etc in NBA 2K21.