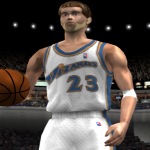 We’re at midcourt, and the ball is about to go up…it’s Monday Tip-Off! Join me as I begin the week here at the NLSC with my opinions and commentary on basketball gaming topics, as well as tales of the fun I’ve been having on the virtual hardwood. This week, I’m tipping things off with some reflections as I experience a reunion with 2002.

The song changes from “Without Me” by Eminem to Junkie XL’s remix of Elvis Presley’s “A Little Less Conversation”. Speaking of remixes, Scooter’s take on “The Logical Song” by Supertramp is also on the playlist, along with “By the Way” by Red Hot Chili Peppers. There’s even some Avril Lavigne, among other chart toppers. And speaking of music, that NBA Live 2003 soundtrack is incredible! It’s one of the games that I’m playing, along with its immediate predecessors, NBA Live 2001 and NBA Live 2002. Even NBA Live 99 PC gets the occasional spin. The year is…2022.

Needless to say, I’m experiencing those things a little differently than the first time around. Those hits that were charting in 2002 are on a Spotify playlist, rather than CD or radio (or, more honestly, acquired via LimeWire or Kazaa). Those games are being played thanks to fixes that allow them to run on modern hardware far better than what I had at the time. Thanks to emulation, I can even run NBA Live 2002 on my PC if I’m getting screenshots, or if it’s more convenient than firing up my PlayStation 2. In more ways than one, I’m having a reunion with 2002. Despite what you may think, this isn’t a cry for help from a Grumpy Elder Millennial who’s edging closer to forty.

If you’re familiar with my content and coverage of basketball video games, you’ll know that I enjoy revisiting the classics. It’s something that I’ve done more often over the past couple of years in particular, after breaking out of a rut where I was grinding in MyCAREER year-in, year-out. I have my retro kicks and phases, which usually develop when a game that I revisit really speaks to me for one reason or another. Other times, my nostalgic walks down memory lane, and perusal of the interactive almanacs that are basketball video games, are inspired by something else. It may be an anniversary, a social media post, or another reminder of a specific time in my life. 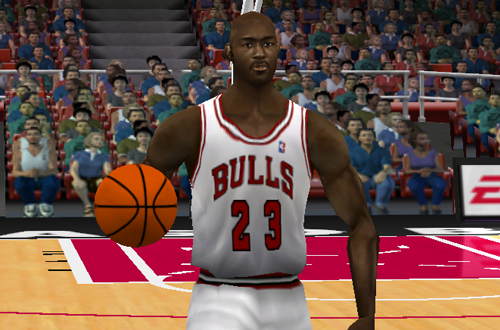 In this instance, my flashback to 2002 – music and all – has been inspired by my upcoming twenty year high school reunion. Although school reunions are a staple of pop culture, and often a humorous setting for a sitcom episode which the characters inevitably attend, I’ve noticed that in real life, they tend to be polarising. People either seem to be of the mind that the past should stay in the past and they’re in contact with all the people from their school days that they want to be, or that it’s an opportunity to catch up and reminisce with some familiar faces and enjoy an evening out. I’m sure it goes without saying, but as you can probably guess, I’m personally in the latter camp.

As such, I’m looking forward to my reunion, and have already been sharing some memories with my Class of 2002 in the lead up to the event. It’s put me in the mood to revisit other memories from that time, from throwing on Spotify playlists featuring the hits of my teenage years, to making a point of revisiting the basketball games of that era. Of course, that’s something that I’d be inclined to do anyway, but this time, it’s wrapped up in an even bigger bundle of nostalgia. There are also some obvious parallels between the games and memories of my school days that come to mind as I reflect on being an avid basketball fan and gamer as a teenager in the early 2000s.

There’s a line in one of my all-time favourite books – Shadow Song by Terry Kay – where a character remembering their teenage years describes it as everything feeling either wonderful or terrible. I was still in my teens when I first read that book (or rather heard the audiobook; on cassette tape, I’m old), and I could see the point they were making. In hindsight though, I appreciate the accuracy of that observation even more. Matters that we didn’t need to sweat seemed so serious and devastating, but even the smallest, most mundane triumphs were such an incredible high. It’s the adolescent dichotomy of joy and agony. In the words of blink 182, this is growing up. 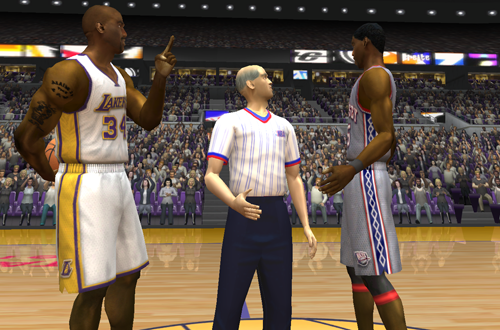 The older we get, the more measured our perspective – usually – and the more we can employ nuance. Even though I stand by many of my original criticisms, some of them don’t bother me as they once did, particularly my gripes with aspects that didn’t feel realistic enough. NBA Live 2003’s Courtside Comedy Cutscenes, NBA Live 2002’s rubbery backboard bouncing…these were major annoyances to a younger me who wanted to see sim games strive to be increasingly lifelike. I still believe that’s fair critique, but now there’s charm and nostalgia to those exaggerated facets. They don’t bug me when I revisit them, which allows me to appreciate their stronger points.

Of course, nostalgia is rooted in positive memories, to the point where it admittedly can cloud our recollections. Nevertheless, I did have fun playing those NBA Live titles back in 2002, which is why I’ve been revisiting them as my high school reunion approaches. No, they weren’t perfect, but neither was high school for that matter. Not every song was a timeless hit, and not every movie or episode of my favourite TV shows back then went down as a classic. I’m not so nostalgic that I think everything was perfect and wonderful. I do have fond memories of that era though – rightfully so – and my upcoming reunion has put me in the mind to reflect on all things 2002.

Simplicity is a recurring motif here, and again, I could draw parallels to carefree days before adult concerns and responsibilities came along. I won’t deny that games such as NBA Live 2001, 2002, and 2003 show their age, lacking the graphical brilliance and other enhancements of their distant successors. However, they were undeniably all about the NBA and basketball. There was no grinding, no loot box and recurrent revenue mechanics, no off-court activities that didn’t directly relate to replicating the NBA. Whether or not they succeeded in all of their goals, they were trying to be the most fun basketball video games they could be, given the technology available. 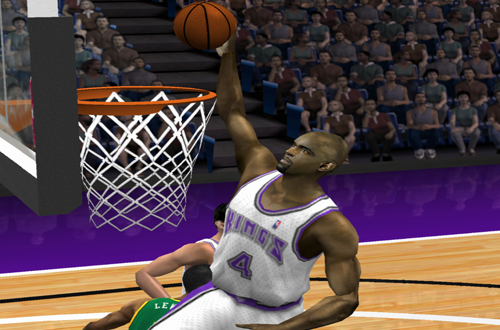 Indeed, if there’s something I wistfully miss about that time, it’s that we could look forward to future games without cynicism. That may sound naive, but it was a more reasonable expectation when games couldn’t be monetised beyond the price of a once-off purchase. This is why if I see someone sneeringly say “If you don’t like grinding, go play a game from 2002, old head”, my response will basically be “OK, sounds good!” When you’re nostalgically listening to music from 2002 and preparing for a twenty year high school reunion, it’s clear your generation isn’t the core demographic for pop culture anymore, and so you don’t have to be jumping on the latest trends.

I’ve also been reminiscing about how at the same time I was navigating high school with adulthood looming on the horizon, I was taking on a larger role in the basketball gaming community. I took over the NLSC in August 2001, so my final year of high school was also spent creating content and managing a popular fansite. Looking back, I can see how taking on those responsibilities at that time and at such a young age led to incidents I might’ve avoided if I were older, with more experience in the real world. With that being said, I have no regrets about taking this gig. I believe that everything unfolded as it meant to or had to, just like my other trials and tribulations circa 2002.

That’s something we don’t realise until we have the benefit of hindsight, when there’s marks on the scale between terrible and wonderful. It’s why even though nostalgia is positive, there’s also a hint of melancholy when you find yourself wishing that you’d appreciated some things more in the moment, or conversely, not cared so much. I won’t go into some of the more personal matters in that regard, but suffice to say, there are further parallels to basketball video games. I think that’s why a high school reunion appeals to me the same way going back to the games I played in 2002 does. You can’t change the past, but you can reframe it, and create new, positive memories. 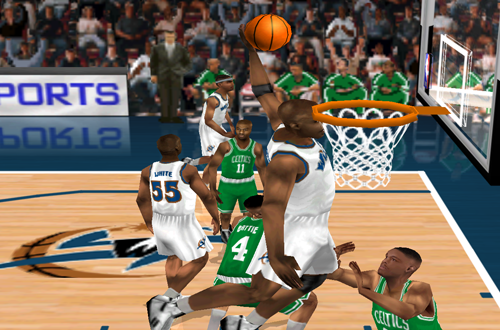 Upon reflection, given my NBA and video game fandom, the end of my high school days had impeccable timing. The early 2000s were a period of change for the league, with many of the players I grew up watching taking on smaller roles, or hanging up their sneakers. A milestone that comes with a change of scene, such as leaving school, inspires similar feelings of unfamiliarity and uncertainty. I’ve realised I have a greater affinity for NBA Live 2001, 2002, and 2003 than I previously thought. Their rosters capture a snapshot of the NBA at the time – as does my roster update for NBA Live 99 PC – and like an old school photo, they become nostalgic windows into the past.

My reunion will come and go, being a pleasant night out, but I can see myself sticking with those games that I was playing in 2002 beyond that evening. Even though I’m enjoying NBA 2K23, I like having old favourites that I can fall back on when I desire a simpler experience without any of the modern hassles. With such a large collection, I have many options to choose from, but I gravitate towards the titles that speak to me for whatever reason. Sometimes, it’s a game I loved, and want to put even more hours into. Sometimes, it’s a game I wish I spent more time with. And sometimes, it goes beyond the virtual hardwood, being inspired by personal memories and milestones.

Nostalgia gets a bad rap these days. Waxing nostalgic will draw accusations of being stuck in the past, not to mention having a distorted view of it. I’ll admit that that’s not entirely unfair or untrue when it comes to nostalgia, but it’s also a cynical take. There is value in looking back at the past; not just as form of comfort and indulgence, but also to learn and gain perspective. I believe it’s perfectly healthy to take an occasional step back in time to reminisce, to reconnect with familiar faces, and find further joy in old favourites. The reunion with my class of 2002 may only last an evening, but in the long run, the songs, the video games, and the fond memories, will continue to endure.