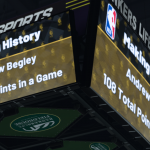 We’re at midcourt, and the ball is about to go up…it’s Monday Tip-Off! Join me as I begin the week here at the NLSC with my opinions and commentary on basketball gaming topics, as well as tales of the fun I’ve been having on the virtual hardwood. This week, I’m tipping things off with some thoughts on what it’s like when we aim for stats and records on the virtual hardwood.

Not to sound like a grumpy old man or anything, but there’s a big emphasis on stats and records in the NBA these days. That’s not to say they weren’t ever relevant, or something that fans and players alike never cared about. Wilt Chamberlain was very much aware of his stats and records, so this mentality predates the three-point era, let alone the past couple of generations. However, it does seem like everyone is obsessed with numbers these days – including rather obscure statistical achievements – to the point where actually winning games and even championships seems secondary.

It’s interesting how this mentality also applies to basketball gaming. Of course, we’ve long used hoops games to put up crazy numbers, leading to a big night for players in real life to be referred to as a “video game performance”. A handful of video games over the past couple of generations have even challenged us to put up stats and beat NBA records for Trophies and Achievements. The funny thing is that it’s not always easy to post ridiculous numbers on the virtual hardwood, or to replicate the feats of NBA greats and record holders. Also, while it’s fun to try alone, chasing records and stats can be a disastrous approach in online play, coming at the expense of winning.

When Kobe Bryant scored 81 points on January 22nd, 2006, a feature on NBA.com challenged us to replicate the amazing performance in either NBA Live 06 or NBA 2K6. Years later, I gave it a try in NBA Live 06 for Wayback Wednesday. Although I topped his total of 81 points, it took me 84 attempts to do so, and I ended up losing the game. Obviously older games have their issues with shooting mechanics and physics, so hitting threes and getting free throw attempts is often harder than it should be. Even today, so-called video game performances aren’t always easy to mimic in games. It really makes you appreciate the difficulty and greatness of those feats! 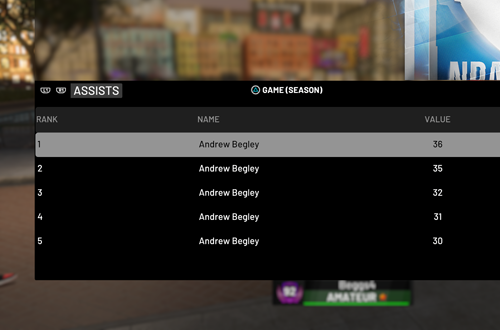 Mind you – and this is getting into some real gamer superstition here – it often feels like the games know when we’re aiming for big stats and record-setting performances. Forget artificial intelligence: it’s like the game is a sentient being, hell-bent on doing everything that it can to stop you from achieving something incredible on the virtual hardwood. It knows what you’re trying to do, and the closer you get, the more it’s going to pull strings to make sure that it doesn’t happen. I mean, it obviously isn’t thinking that; it’s insentient code! Even so, it sure feels that way, to the point where I’ve often wondered if the difficulty is programmed to ramp up when records are near.

I’m not just talking about individual games, either. There have been times where I’ve been on a roll in a franchise or career mode, putting together an impressive winning streak. Even in games that don’t have progressive fatigue – which is obviously a factor that can make a lengthy win streak more challenging – it’s felt like the games start to get much tougher after a while. There’s a good chance that this is psychological; that the pressure of wanting to extend the streak affects my play, or perhaps that I get too comfortable in thinking I can beat the AI whenever I want. Nevertheless, it does sometimes feel like games are designed to get tougher when you’re posting big stats.

It definitely feels that way when you’re actively chasing records. I averaged a triple-double in the second season of my NBA 2K19 MyCAREER, tallying 81 in the regular season, and 16 more in the Playoffs. Once you know how to efficiently rack them up, it becomes much easier. However, whenever the Daily Bonus was to achieve a triple-double, it always seemed harder. Teammates felt more likely to steal rebounds, or miss after my passes. I did set some ridiculous scoring and assist records, but the ones that happened organically seemed much easier than when I aimed for stats. Again, it’s likely down to the pressure, but there were quirky moments that left me wondering. 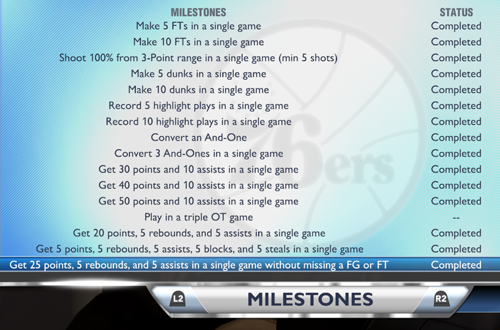 Then there’s NBA 2K14’s MyCAREER. I’ve made it a goal to get to the Hall of Fame and achieve as many Milestones as I can. One of them was to score 25 points without missing a field goal or free throw, along with tallying five assists and five rebounds. Now, the boards and dimes were no problem, but I had so many near misses getting 25 on perfect shooting. As I got close, I’d miss an easy one, or an opponent would catch up for a chasedown block. When I finally achieved it, it was somewhat organic. I did stop shooting though, foregoing a comeback run. The loss was likely anyway, but it shows how focusing on stats can get in the way of winning, or just competing.

Of course, there are times when the games clearly are making it more challenging, or indeed, playing by their own rules. Any sim game with reasonably sophisticated AI will throw double teams your way, or change up their defensive strategy accordingly. Arcade games and their rubber-band AI also have a way of pulling you back to Earth when your performance is starting to get out of this world. However, it’s the moments where you can’t be sure if the game is messing with you: teammates stealing boards or blowing easy shots and chances for assists, unfavourable dice rolls on jumpshots, defenders suddenly getting tough when you just need a couple of baskets, and so on.

To that end, it’s probably a mix of mechanics and psychology, though we may be inclined to blame the former in cases where it’s the latter. Either way, few things are as frustrating as when you need one more stat to achieve a goal or set a record, and the game just won’t let it happen. On the other hand, it’s very satisfying when you do hit a statistical milestone or achieve a record, especially if you’ve had to overcome some shenanigans to do so! Also, since the CPU isn’t a sentient being – and may not have been playing fair anyway – you don’t have to feel bad about being unsporting in your pursuit of stats and records. In short, go ahead and run up the score if you want! 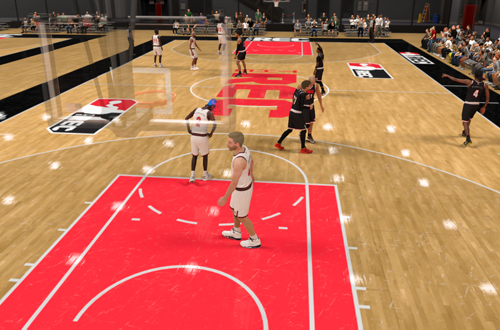 Unfortunately, our obsession with putting up stats can be a detriment in the online arena. As my attempt at besting Kobe’s 81 points demonstrated, chasing numbers can cost you the game against the far more predictable AI, so it’s likewise a potentially dangerous approach in online play as well. Playing in The Rec, I’ve been a part of too many games where attempts to pad stats (and admittedly goof around in the process) has blown comfortable leads and lost games. It’s also prevented the team I’ve been on from being competitive in the first place, when I’ve found myself squadded up with gamers who are more interested in their own stats than playing winning basketball.

As I said, when it’s just you and the CPU, everything is fair game. You can hog the ball as much as you want, pad numbers to your heart’s content, and not worry about anyone else’s enjoyment except your own. In online play, you’re not Player One anymore. It’s not much fun for everyone else when one person decides that they’re going to play 1-on-5, or when a couple of people decide they’re going to treat the rest of the squad like AI players. Also, although it is possible to win if only a couple of people are doing the heavy lifting, freezing out teammates and only caring about putting up some big numbers isn’t a reliable blueprint for success in The Rec.

Even when people are passing the ball, it can be in a selfish and destructive way. I’ve had teammates that were clearly trying to pad assist numbers for a triple-double or Badge progress, to the point where they’ll pass up wide open shots under the basket. It isn’t always costly, but leads can easily be squandered and comeback attempts swiftly derailed when you start focusing on stats rather than making the right play and getting a bucket. Similarly, going for the assist pass rather than moving the ball and spacing the floor is going to lead to turnovers and bad, forced shots. Bottom line, if you’re playing for stats with no regards to context or strategy, you’re not a good teammate. 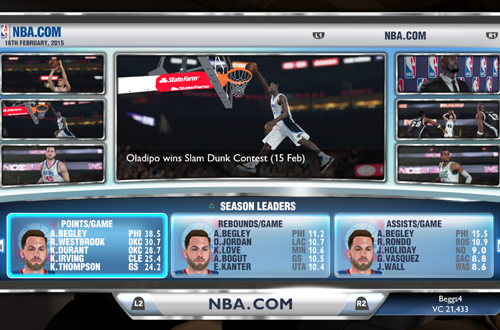 With that being said, it’s understandable. Most people don’t play the career modes to be role players – although some certainly do – and putting up numbers is expected. The choice between grinding and paying also encourages selfish play; again, not an issue offline, but a toxic approach online. The need to upgrade your player and the desire to feel like you’ve made a tangible contribution emphasises getting stats over good teamwork, and even victory. When you step into the online arena however, selflessness goes a long way. Being part of a team means doing what’s necessary to win, and sometimes that means taking a back seat as far as vying for stats and records.

If it’s a single player mode, however, by all means go nuts! The extensive stat tracking in franchise and career modes make it extremely satisfying to achieve various records, and post ridiculous stats. It isn’t always easy to do so though, even for the experienced and skilled basketball gamer. Maybe the CPU won’t play fair, or maybe we’ll psyche ourselves out, especially with a finicky goal such as the aforementioned 25 points on perfect shooting. Still, it’s exhilarating to snag a last rebound, dish out a final assist, or make a shot that achieves our goal. We all know how to beat the AI, but when we get those stats and records, it’s like defeating a tough bonus boss for 100% completion.

Needless to say, it’s all too easy to get caught up in stats and obsess over getting your numbers. In offline play, that needn’t be costly unless you’re really forcing the issue. In online play, caring too much about how many points you’re scoring, trying to pad your assist numbers with unnecessary passes, or wandering out of position to snag a few extra rebounds, can cost you the win. If you want to set records and be a one-man show every game, it’s probably best that you stick to MyCAREER. AI players don’t have much to say when you’re a ball hog, and chemistry is easily earned. Put stats and records over wins in the online arena, and the results will speak for themselves.

The honeymoon period for NBA 2K23 is drawing to a close, leaving many to wonder: is this the greediest 2K ever? Despite pushback from shills and toxic online players, valid criticism is breaking through. We also discuss a happy accident with MyNBA Eras rosters being patched before more serious issues, recall a cool feature in NBA Starting Five 2005, and hear from the community in this week’s mailbag.