Monday Tip-Off: Aiming for the Hall of Fame in MyCAREER 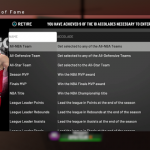 We’re at midcourt, and the ball is about to go up…it’s Monday Tip-Off! Start your week here at the NLSC with a feature that’s dedicated to opinions, commentary, and other fun stuff related to NBA Live, NBA 2K, and other basketball video games. This week, I’m tipping things off with an update on my NBA 2K19 MyCAREER, and my new goal of making it to the Hall of Fame.

As the 2019 NBA Finals loom in real life, I’m already twenty games away from the 2020 Playoffs in my NBA 2K19 MyCAREER game. My enthusiasm has continued into a sophomore campaign, and with the regular season winding down, I’ve got a few milestones in my sights. Within the next few games, I’ll break Wilt Chamberlain’s record for most points, and my own record for most assists. I’ve already set a new steals record, and ensured that I’ll average a triple-double for the entire season. I’m feeling quite confident that I’ll guide the Bulls to a second straight championship.

My intention here isn’t to brag; everyone puts up awesome numbers in MyCAREER, after all. I’m just enjoying the challenge of trying to get triple-doubles, break a few records, and complete two full seasons while playing on twelve minute quarters. I do have another goal, however. I’ve been keeping an eye on the requirements for making the Hall of Fame, and it’s my intention to achieve that before I put NBA 2K19 aside. Despite spending a lot of time with MyCAREER in both NBA 2K13 and NBA 2K17, it’s something that I haven’t been able to accomplish. With all of the time that I’ve put into NBA 2K19’s MyCAREER, I feel like this is the year.

The ability to enter the Hall of Fame after retiring has been a feature of MyCAREER since NBA 2K12. It was revealed during the preview season, as we caught a glimpse of the cutscene in which our player gives a speech at the podium, while highlights of their career are shown on the big screen. It struck me as a cool detail, but at the time, I didn’t have much interest in career modes. For that matter, I was still getting used to Isomotion after years of playing with NBA Live’s right stick dribbling controls. After I got hooked on MyCAREER in NBA 2K13 as a rising star with the Denver Nuggets, I also developed an interest in fulfilling the requirements for a Hall of Fame nod. 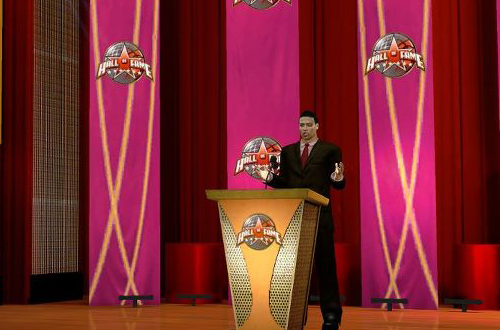 Unfortunately, my approach to basketball gaming has proven to be an obstacle. While I don’t have any trouble getting the job done on the virtual hardwood, my preference for playing every single game with full length quarters makes every season a long journey. It feels like an accomplishment of course, and I do enjoy challenging myself to do that, but it naturally makes it far more difficult to complete multiple seasons within the space of a year, and before the release of the next game. I’ve had the same issues with franchise modes over the years, as I noted when I discussed the prospect of making peace with simulating games in September last year.

On the bright side, quite a few of the requirements for making the Hall of Fame in NBA 2K19’s MyCAREER can be accomplished within the first season. As a result of all my Badge grinding and stat padding in what turned out to be an historical rookie campaign, I checked off no less than nine of the requirements! I was named regular season MVP and Finals MVP, while winning the championship. I led the league in points, assists, and steals; all three are separate accolades, with a fourth accolade for achieving them all in the same season. My All-NBA and All-Defensive selections round out the accolades that I’ve managed to achieve so far.

Getting that tenth accolade is a little trickier, however. Leading the league in blocks or rebounds as a point guard is easier said than done. With Andre Drummond injured, I was actually leading the league in rebounding for most of the season, but he’s now played enough games to qualify for the lead again. On the other hand, if it’s the total that counts – rather than being the league leader per game – I still have more boards than Drummond or any other player. I imagine it’s per game average (since that’s what the league leaders have been based on since the 1970s), but if not, it may become my tenth required accolade to secure my place in the Hall of Fame. 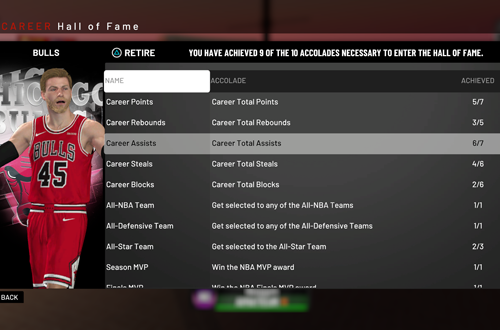 I made my second All-Star appearance in the 2020 season, but achieving that accolade requires three selections, meaning I’d also have to play through the 2021 season. As much as I’ve enjoyed my time with NBA 2K19’s MyCAREER so far, I’m not sure that I can do that before NBA 2K20 comes out; at least without simulating, or reducing the quarter length. With two full seasons under my belt, that’s something I would likely consider being as close as I am to meeting the Hall of Fame requirements, though I’d also like to spend some time with MyTEAM. I’d like to put the Michael Jordan cards that I’ve acquired to good use after all, especially the Pink Diamond.

That just leaves the career totals. I’m over halfway there in career points, assists, and steals, with assists being the closest at the 6/7 mark. I’ll note here that it would be a lot easier if the Hall of Fame screen displayed actual totals for those statistical categories rather than a fraction (as in NBA 2K13), even though it wouldn’t neatly line up with the other accolades. It’s easy enough to work out the fractions though, and in doing so, I believe the total for career assists is around 3000. If I’m correct, I’d need to average around 15.4 assists per game for the rest of the season to hit that mark. My current average is 21.7 assists per game, so that is actually quite doable.

Making the Hall of Fame would be a great capper to an enjoyable experience with MyCAREER in NBA 2K19. Despite feeling burned out on the mode before this year’s games came out, I found myself drawn in once again as the NLSC squad decided to give Pro-Am another try. I don’t see myself reaching much higher than my current 92 Overall, but I feel very accomplished for getting as far as I have without buying any VC. I’ve maxed out all of my Badges, I’ve set virtual records, and most importantly, it’s been fun and I’ve felt hooked. Finally getting to see the Hall of Fame cutscene will be an extremely satisfying conclusion to the journey. 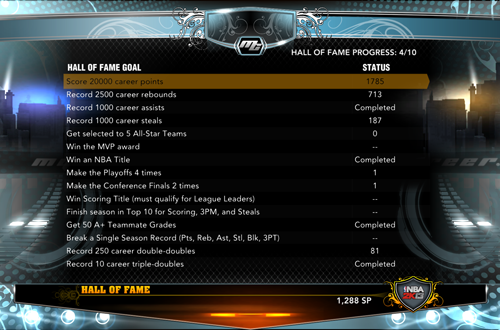 Indeed, it might be a great way of putting a bow on playing MyCAREER; at least for now. I know I’ve been saying it for a couple of years now, but I would like to return to my roots as a franchise gamer, and take a break from MyCAREER and its connected modes. I honestly thought I was done when I spoke about feeling burned out back in August, but instead, I ended up having a good, strong run with it. With my increasing dissatisfaction with NBA 2K’s online experience, particularly the gatekeeping and lack of balance, I have less incentive to play MyCAREER to build up a player for Pro-Am and The Playground in NBA 2K20. With this achievement, I could move on.

Sadly, my Hall of Fame bid in NBA 2K17’s MyCAREER is no longer accessible. Not only did I accidentally overwrite my game with a backup from the cloud, but since the servers are now offline, I can’t download the necessary data to continue it as an offline save anyway. I do still have my NBA 2K13 MyCAREER save, but I’ve only achieved four of the necessary goals. Many of them are very tough to reach and require playing multiple seasons, and as much as I loved NBA 2K13 at the time, I don’t think that I could go back to playing it; not as often as I’d need to in order to reach at least ten of those goals, at any rate. Of course, simulating is always an option.

To that end, my goal of being enshrined in virtual Springfield (not to be confused with Virtual Springfield) is something I’ll have to keep working towards in NBA 2K19. It’s difficult to reach a definitive end in basketball video games, and in my experience, I often move on to a newly released game with some level of unfinished business in its predecessor. Getting the tenth accolade to qualify for the Hall of Fame and being able to retire a player with a sense of finality and accomplishment will hopefully buck that trend, and perhaps prove to be the catalyst to moving on to MyLEAGUE at long last. I mean, a front office role does seem like the next logical step for a Hall of Famer…