Monday Tip-Off: An Ode To Physical Media in 2022 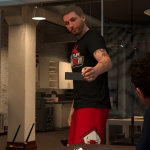 We’re at midcourt, and the ball is about to go up…it’s Monday Tip-Off! Start your week here at the NLSC with a feature that’s dedicated to opinions, commentary, and other fun stuff related to NBA Live, NBA 2K, and other basketball video games. This week, I’m tipping things off with an ode to physical media, a concept that may not be as outdated in 2022 as many people think.

Late last year, I made a couple of purchases that may seem very odd, namely the disc versions of NBA 2K21 for PlayStation 5 and NBA 2K14 for PC. Seeing as how I own digital copies of both games, it may sound like an unnecessary double-dip, even at the bargain bin price that I paid (and in NBA 2K21’s case, I used part of the balance of a gift card). Of course, I am an admitted collector of basketball video games, which perhaps makes my motivation more understandable. NBA 2K14 PC is a particularly interesting item, as it was the final disc release for that platform.

My continued interest in physical media probably seems weirder, and an indication of an “old head” mindset. Here’s the thing, though. I’m not against digital content and streaming services. I make use of both, and understand their advantages over physical media. I also understand their disadvantages. Whether they want to admit it or not, a lot of people who once sneered at anyone who still valued physical media are starting to see those drawbacks, too. In short, many people are realising that the convenience of digital has a price when it comes to future accessibility, the second hand market, and even the concept of ownership. What isn’t tangible is proving to be fleeting.

I mentioned people sneering at others who still use or are interested in physical media. It hasn’t been uncommon to see people scoffing at the thought of watching TV shows and movies on DVD, or even the admittedly technologically superior Blu-Ray. Why would you do such a thing – make use of such an outdated concept like physical media – when you can just stream it? Physical media, like cable, is frequently looked upon as obsolete technology that only stubborn and inept old heads are clinging onto. This attitude also applies to gaming. Besides a collector’s edition with non-digital extras, why would you ever go to a store to pick up a game, or wait for it in the mail? 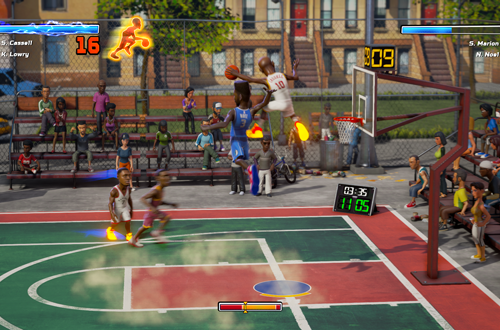 Of course, this is a myopic point of view, as it assumes universal accessibility with digital platforms. Internet speeds and data caps haven’t always allowed streaming platforms and digital content to be globally viable. There’s region-locked content, and higher prices compared to physical copies. Beyond that, some people just like to have a product they can hold, and display in their collection. I can relate to all of that. It was only a few years ago that I still had to be careful with my data each month, and endure long downloading times for Triple-A releases on Steam. I’ve also felt the sting of regional exclusives. Fortunately, Australian internet has improved…somewhat.

However, there’s a problem that no one can avoid, and it’s cut down on the giggling over physical media as being something for the out of touch. The major drawback of streaming services and digital storefronts is that content can easily be pulled, and is then no longer accessible. We’re seeing it happen quite frequently. As popular shows head to different streaming services, the costs are beginning to resemble cable bills; at least if you want to retain access to all of your favourites. People who poked fun at DVDs and Blu-Rays are now up in arms when TV shows and movies are removed. In a way, physical media has had the last laugh. It’s certainly shown that it still has value.

We see this with video games as well. It was still possible for me to buy a copy of NBA 2K14 PC in 2021, because there was a physical release to track down on the second hand and retro market (as it happens, my copy was sealed). That’s something we can’t do with NBA 2K15 onwards, or for that matter, earlier digital releases of NBA 2K. You might find a key on the grey market or some third party stores, but they’re increasingly rare, especially the further back you go. To put it in perspective, you can easily find NBA Live 95 PC at reasonable prices on eBay. Getting your hands on NBA 2K17 PC – a game released over 20 years later – is a far more difficult task. 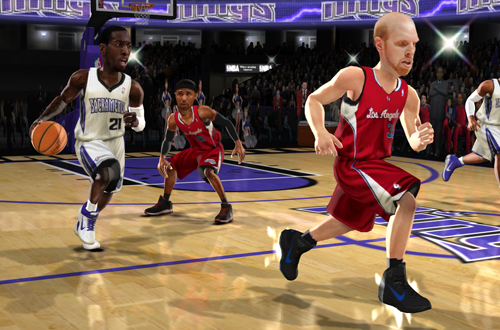 It’s why the planned shutdown of the PlayStation 3 Store was so controversial. As a digital only release, NBA Jam: On Fire Edition was set to become unavailable as of August last year. Fortunately Sony changed their minds, and while you do need to add funds to your wallet through other platforms, you can still make purchases on PS3. If not for the decision to keep the PS3 Store open however, OFE would be gone. That’s already happened with certain downloadable content, such as the Legends Showcase for NBA 2K12, or the All-Time College Teams DLC for NBA 2K17. It can still be downloaded it if you bought it years ago, but if you didn’t, you’ve missed your chance.

Admittedly, these specific examples have niche appeal. Not everyone likes to play old games, and if you’re not a content creator who covers retro topics, getting your hands on something like the Legends Showcase may not be a priority. I do still see questions about buying NBA 2K games that have been removed from Steam though, so there is interest in them. However, I’d suggest it’s the principle of the matter. Like a streaming service removing a series or film, it’s that loss of content and the convenient access that was the whole appeal in the first place. On the plus side, at least we can usually still download games in our Steam library, even long after they’ve been delisted.

At the same time, we don’t have that second hand and retro market with digital only releases. We can’t swap or lend games with friends, though Parsec does provide a means of sharing games that no longer have (or never had) connectivity. For all the convenience of digital content, sometimes it’s easier to pop in a disc or cartridge. There’s certainly no removing a game from your collection or circulation, short of someone physically relieving you of your copy, or rounding up all the copies in the world to destroy them (which to be fair, some have tried to do with Shaq Fu). Digital copies are important for game preservation, but physical media is necessary, too. 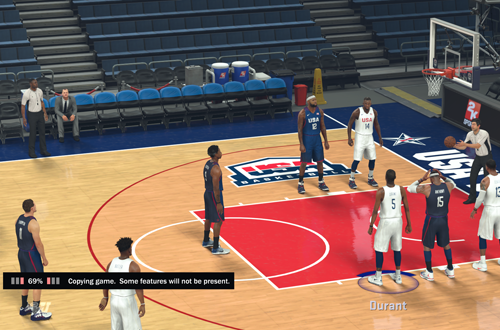 One only has to look at the Grand Theft Auto series to see the importance of physical media. Due to issues with music licensing, patches have removed certain songs. This is understandable, but nevertheless unfortunate. If you’re playing the games on Steam, or the digital re-releases on console, you’re stuck with those updated versions. If you have the original discs however, the games are still intact. That’s not even getting into the controversy of the buggy definitive edition and removal of the old digital versions. Ownership and access are tenuous concepts with streaming services and digital stores, with availability and quality/intactness increasingly becoming an ongoing concern.

This isn’t to say that physical media avoids the minefields that digital copies must navigate, particularly when it comes to games. Even if you have a physical copy of a recent NBA 2K title for PlayStation or Xbox, installing or reinstalling it from the disc will still trigger the download of the official patches, some of which are as large as 30 GB. In that sense, having the disc on hand doesn’t save as much time or data as one may think. You can of course go offline and avoid those updates, but that wouldn’t be a desirable course of action in the long run, particularly with a library of other titles. You’d waste more time uninstalling and reinstalling it every time you want to play.

There’s still a convenience to physical media though, and again, if you happen to see a game that you skipped when it was new be put on sale for just a few bucks, you may want to check it out. Not only are NBA 2K titles removed from Steam at some point after online support for them ends, but they’re rarely discounted after new games come out. Physical media gets marked down for clearance all the time, but digital copies remain full-priced, even when they’re no longer fully featured due to server shutdowns. The Legend Edition of NBA 2K18 was available long after 2K shut down its servers, despite all of its bonus features being content that required online support! 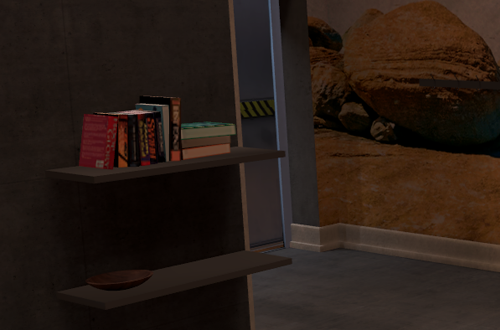 Sadly, it does seem as though physical media is being phased out. The Simpsons box sets only run through Season 20 (of 33 seasons and counting), and Seasons 18 and 19 were only produced in recent years at executive producer Al Jean’s insistence. WWE has recently announced that they’re discontinuing DVD releases. The WWE Network arguably makes the format obsolete, but it’s a subscription service as opposed to a one-time purchase, and its content is subject to removal and censorship. It seems the NBA is no longer producing DVDs, from documentaries and highlight compilations to championship recaps. That’s worse, as the NBA lacks WWE’s on-demand library.

And that’s the complaint here: quality, quantity, and availability of content. It’s not a case of everyone over the age of 25 being puzzled and thwarted by digital services and new technology. The issue is being unable to access the content we want – either because it’s removed or not being produced – or having it undesirably modified. It’s about being overcharged, especially for old content that is normally discounted when it comes to physical releases. It’s about saving money on one-time purchases rather than ongoing subscriptions. And it’s about the convenience of not having to worry about internet or service outages that render the convenience of digital content moot.

Look, I do buy games digitally – especially as I don’t always have a choice – and I also enjoy streaming services. I don’t expect that to change in 2022 and beyond. I’ll always seek out a physical release when possible though, as I do enjoy having a tangible copy in my collection. I feel a greater sense of ownership, and confidence in the integrity of the media in question. I’ve also been able to shop around for better prices. It’s not that I don’t appreciate digital storefronts and streaming, but we must acknowledge their drawbacks. When something isn’t entirely or satisfactorily replaced by its successor, it hasn’t yet truly become obsolete. That’s the situation with physical media in 2022.