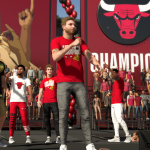 We’re at midcourt, and the ball is about to go up…it’s Monday Tip-Off! Start your week here at the NLSC with a feature that’s dedicated to opinions, commentary, and other fun stuff related to NBA Live, NBA 2K, and other basketball video games. This week, I’m tipping things off with some reflections on my annual rituals and goals in NBA 2K games.

I buy NBA 2K every year. In fact, throughout this past generation, I’ve double-dipped with copies for PC (for mods) and PlayStation 4 (for online play). I suppose that makes me a part of the problem as far as supporting the game despite having gripes with it, but in my defense, I’m both a collector and a content creator. Without at least one copy of the game, it’s difficult to provide coverage post-release. I know this all too well, having covered NCAA Basketball 10 throughout its preview season, and then not at all afterwards because I couldn’t import the game (I since have for PS3).

It’s also my aim to enjoy the game every year, and with the NBA Live series being rather underwhelming or completely absent from the basketball gaming space for much of the past decade, I’ve been getting my virtual hoops fix from NBA 2K. As such, there are a few rituals I engage in, and goals that I strive for, in each new NBA 2K title. In some respects, it’s probably made it difficult to break some of the habits I’ve formed, especially in MyCAREER. On the other hand, it always provides me with some baseline goals from which I can derive a sense of accomplishment, as well as completion. If I manage to attain these goals, I feel like I’ve got my money’s worth.

Since getting into MyCAREER in NBA 2K13, and the online scene in NBA 2K16, I’ve made it a point to reach 90 Overall every year. This has become a more arduous task since I decided to adopt a firm No Money Spent approach beginning in NBA 2K19, but nevertheless it’s a goal I’ve managed to reach every year since NBA 2K17. I may be able to get there in NBA 2K21 Current Gen before my PlayStation 5 arrives in December, at least on PlayStation 4. Hitting 90 Overall – on top of frequently earning a Trophy/Achievement – also ensures that my player is in pretty good shape for online play, and very capable of being dominant in the NBA side of the mode. 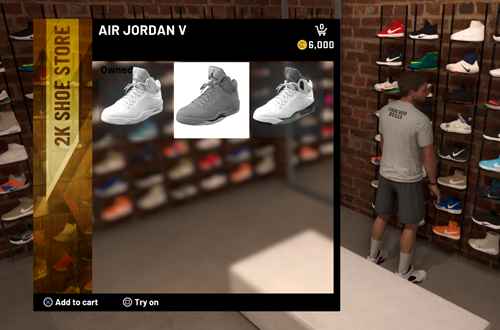 Speaking of my MyPLAYER, every year I like to outfit him with Air Jordan Vs. The reason for this is that they’re my favourite Air Jordans, because I’ve actually owned a pair and used to wear them when I played in my local junior league many years ago. It just feels right when I can finally equip a pair of the Air Jordan Vs in Park, Pro-Am, and NBA play. With that being said, I usually wait until I win a free pair of shoes on the Daily Spin, rather than spend upwards of 6000 VC. That way, I can usually get the entire Air Jordan V range for my virtual shoe collection. Disappointingly, however, NBA 2K21 only includes the low cut version for Park games and The Neighborhood.

MyCAREER isn’t the only place that I like to pay tribute to Michael Jordan, my all-time favourite player. The last few years, I’ve made it one of my goals to acquire at least one of the MJ cards in MyTEAM. Ideally, I’d like to be able to acquire said cards in both the PC and PlayStation 4 version, and from NBA 2K19 through to the Current Gen version of NBA 2K21, I’ve been able to do that. Unfortunately, the time that I’ve spent in MyCAREER hasn’t allowed me to play with them as much as I’d like, but simply being able to collect them – while not spending any real money on packs – has been very satisfying. I’m glad the card on PS4 will transfer across to PS5 MyTEAM.

With the adoption of the MyREP system, achieving the highest level I possibly can has also become one of my annual goals. There are a couple of practical reasons for this, too. Higher rep makes it easier to get games in an online scene that’s become very elitist, requiring one to stand out in every way possible: Overall Rating, MyREP, and clothing. I also enjoy unlocking MyCOURT customisation, aiming to at least be able to change everything up to the floor design. Quite irritatingly, floor customisation has been moved to an even higher MyREP level in NBA 2K21 Current Gen – one that takes hundreds of online games to reach – so I’m not sure that I’ll get there this year. 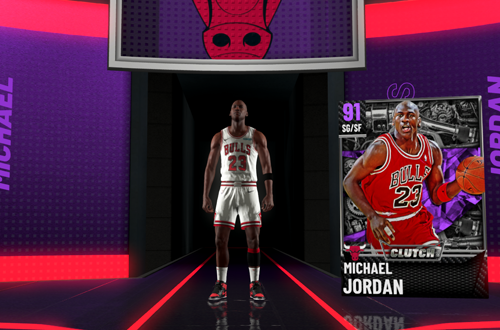 I mentioned Trophies and Achievements. Although I’ve yet to 100% any NBA 2K game, I do enjoy collecting as many of them as I can every year. I’ve said it before, but I have to hand it to whomever it was that came up with the concept. Be it a Steam or Xbox Live Achievement, or PlayStation Network Trophy, I definitely get a kick out of hearing the notification tone, and seeing it pop up. I realise they’re meaningless at the end of the day, but it’s nice to have some additional goals to aim for, and I like how the concept can steer us towards trying modes or exploring features that we may otherwise overlook. It just feels like I’m getting something extra out of a game.

When it comes to MyCAREER, I’ve developed a similar habit to the one I used to have with franchise gaming. I want to complete at least one full season, playing every game on twelve minute quarters. I managed to do this in NBA 2K17 and NBA 2K19, actually playing two full seasons in the latter. I did get through my rookie season in NBA 2K20, though I simmed the final 20 regular season games as I’d already hit 99 Overall and maxed out all my Badges. Moving forward, I’ll probably sim a lot more than I used to, but I still like the idea of completing at least one season. As I look to transition back to franchise gaming, that’ll likely be my approach to that goal.

In playing so many MyCAREER games, my goals were not only to build up my MyPLAYER for online play, but also to reach the Hall of Fame. I finally managed to accomplish that in NBA 2K19, which has given me a sense of closure on that goal. At some point I’ll probably go back and try to sim my way to the Hall of Fame in my NBA 2K20 save. This year, I’ve mostly been playing The Rec, with a handful of NBA games to help out with the grind. I’ve also usually been on a mission to re-write the record books and average a triple-double. Having accomplished that, I’ll admit that I’ve lost interest in the NBA side of things, as it does become a repetitive grind. 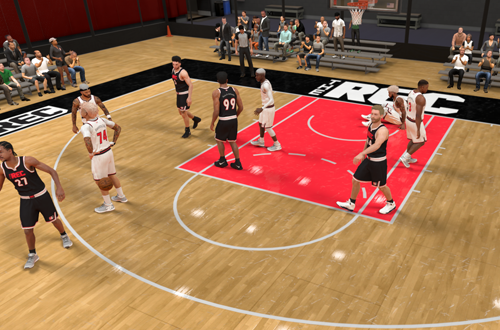 As for the connected modes, apart from the aforementioned MyREP level, my goals for online play are basically to have as an enjoyable experience as possible: to play well and be a good teammate, hopefully being as part of as many wins as I can. I do like to have at least one really big game a year, of course. As a playmaker, I aimed to have a game where I racked up a ton of assists while still scoring a healthy amount of points. As a big man – and especially this year in NBA 2K21 – it’s been about snaring rebounds and throwing down some rim-rattling dunks. I’d always like my last online game of a title to be an enjoyable win. Fortunately, I finished NBA 2K20 on a high.

So, are my goals and rituals bound to change moving forward? Well, if I do end up playing MyCAREER and its connected modes in the future, I expect I’ll still want to grind up my player as much as I can, have some enjoyable games online, and equip the Air Jordan Vs. I would like to return to my roots as a franchise gamer – I’ve been saying that for years now – and a new generation with the revamped MyNBA mode might be the fresh start I’m looking for. As long as I play MyTEAM, I’ll want to get an MJ card at some point, and ideally put it to good use. They’ve become my goals and rituals for a reason. They’re fun for me, and allow me that sense of completion.

Above all, I want to enjoy NBA 2K every year. I’ll certainly go into every release with a view to giving it a chance and trying to find the fun in it, with the help of my annual goals and rituals. If there are problems, I’ll of course voice my criticisms, but beyond that, the aim is to get my virtual basketball fix. Worst case scenario, I’ll put a game aside, and return to one that I like. However, having that shortlist of things to do every year, while also remaining open to trying out something new, has allowed me to make the most out of NBA 2K more often than not. With there only being twelve months before a new game comes out, it pays to have goals you can reach annually.