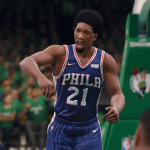 We’re at midcourt, and the ball is about to go up…it’s Monday Tip-Off! Start your week here at the NLSC with a feature that’s dedicated to opinions, commentary, and other fun stuff related to NBA Live, NBA 2K, and other basketball video games. This week, I’m tipping things off with a look at artificial difficulty in basketball games.

No matter what the genre, it’s all too easy to blame a video game itself when we lose. We’ll blame the controls, the mechanics, the AI, the overall design…anything except our own skills on the sticks and buttons. However, there are times when video games pose a challenge simply by not playing fair, manipulating and manufacturing the results. Be it rubber band AI, lightning fast reaction times, or some other tricky tactic, it all comes under the heading of artificial difficulty. Often a necessary evil, it can be used very effectively under certain circumstances.

If implemented poorly, however, artificial difficulty can ruin gameplay by punishing gamers for being too good. It can be particularly intrusive in sim-oriented basketball titles, where the gameplay is intended to accurately mimic the real life sport. There have been great improvements to the AI in the long-running NBA sim titles over the years, with many enhancements that have resulted in a more sophisticated virtual basketball experience. Unfortunately, a few legacy issues with artificial difficulty do remain. I believe it’s vital that the developers at EA Sports and Visual Concepts find a way to move past them in future NBA Live and NBA 2K releases.

When it comes to artificial difficulty in basketball games, I’m sure we all have plenty of stories to tell, but they generally come down to the same old tricks. When you get out in front with a sizeable lead, your players will suddenly start performing poorly while the CPU starts scoring at will and making every defensive stop. Easy shots will clang off the rim; maybe you’ll even blow a few dunks. The CPU won’t have the same problem though, as they’ll knock down shots with defenders draped all over them. No matter what the strategy, the AI will always have an effective counter, or it just won’t work. Leads evaporate, games are lost. The urge to hurl the controller will arise. These are all frustrating moments of artificial difficulty, but in all fairness, they have their place in basketball games. It’s tough for the AI to contend with a human brain that is capable of imagination and improvisation, because it can think inventively and laterally. With our ability to master the controls and the most effective tactics, the AI needs to have some advantage to remain competitive. Ideally the AI in modern games will be adaptive and programmed with a wealth of basketball strategies, but it still needs a few aces up its sleeve to keep pace with skilled gamers. Tilting the game in its favour is an effective way of providing a challenge for the best of the best.

Furthermore, there is an element of realism to the phenomenon. Basketball is often a game of runs, with a spirited charge cutting into a big deficit. Comebacks happen, even seemingly unlikely ones. Talented scorers will still manage to put up points against great defense, while elite defenders will make their mark on games as well. If we want a realistic basketball game, we shouldn’t be able to run the same play or employ the same tactic successfully on every possession. There should be times when we do everything right but still come up empty. Old adages such as “great defense, better offense” and “Right idea, wrong result” should be reflected in the gameplay.

Of course, it’s not that some of these things do happen; it’s how they happen. Players do miss easy shots, or have off-nights and cold stretches, just not with the consistent convenience that they do when the AI needs to mount a comeback. A big lead can result in complacency, which an opponent can in turn take advantage of, but it’s fishy when your skills seemingly evaporate while the AI gains superhuman abilities. The game doesn’t feel balanced when defenders stick to you like glue and always impede your progress, while the AI can easily brush you off or leave you flat footed. At a certain point, artificial difficulty is clearly dictating the challenge and comeback logic.

This becomes an even bigger problem when those occurrences begin to interfere with the amount of realism in the game. It’s one thing to be dominated by star players and strong teams, as they should be a challenge to deal with. It’s another thing entirely to be beaten by outmatched teams in an unlikely manner, or by players doing things that are beyond their capabilities. Weak defenders playing lockdown defense, poor foul shooters knocking down free throw after free throw, and players without range hitting several heavily contested long jumpers, are just some of the situations where it feels as though player ratings are being ignored so that the AI can compete (and win). Again, in order to be truly realistic, there has to be an element of the unexpected and unlikely present. The issue is in the timing and convenience. There’s also the matter of whether or not the user can do the same thing. Will the same tactics, or other creative strategies, yield similar results? Can those tactics be employed with the same players, or superior ones? If there’s a hidden momentum mechanic, can users swing it in their favour the way that the AI can? If not, there’s a lack of balance, and a clear amount of artificial difficulty at play. The trouble with artificial difficulty is that it often doesn’t make us feel challenged in a satisfactory manner. We just feel like ragequitting.

Unfortunately, artificial difficulty still plays a major part in the way that basketball video games provide users with a challenge. The higher the difficulty setting, the worse it gets. Now, programming AI for a basketball video game that doesn’t rely at all on those old tactics, and can ably compete with a human user in terms of devising basketball strategies, is easier said than done. If it were simple, these legacy issues would already be a thing of the past. However, both NBA Live and NBA 2K should ideally strive to overcome these limitations as best as possible, introducing more strategy and providing a challenge that doesn’t come at the expense of realism.

With that in mind, I believe the solution involves a closer link between the difficulty setting, and the amount of realism and strategy. Easier difficulty levels would not require users to care as much about realistic basketball strategy, as the CPU’s tactics would be relatively straightforward. As the difficulty level increases, the CPU would play smarter, requiring users to outthink and outplay them. Perhaps a special setting could retain some elements of artificial difficulty to provide a really tough challenge for truly elite gamers, but the hardest regular setting would retain balance and realism. That way, the challenge would come from having to play a better game of basketball.

I expect there will be traces of artificial difficulty until such time as that ideal can be reached, but I’d like it to be the long term goal. In the short term, dialling back on the comeback logic a little, improving the defensive rotations, and fine tuning aspects such as physicality and shot success for the user and CPU, will help with the balance. As much as possible, losses should leave us feeling that we could’ve and should’ve played better, not that we were punished for being too good at the game. In certain genres of games, a little artificial difficulty is part of the appeal. In sim basketball games, it often stands in the way of what they’re ultimately aiming to be.

This is a big problem with NBA2k MyTEAM Mode (Domination) It was insanley difficult beating All Time Warriors and All-rime Bucks Pink Diamond Kareem SMH, 3 stars for each team was one tough road to earn Diamond Joe Dumars, Not to mention MT Auction house is insanely inflated untill All-Star break each year making it extremely tough to beat the mode especially with EARNED cards only which i did, Ruby Klay Thompson is going for 700 MT Literally right now but a few months ago it was roughly 100,000 MT..the inflation is literally ruining the freedom of the mode and attempting to squeeze every last dollar from consumers by having them buy packs ..by the way NBA2k has THE WORST Packs of any game i can literally think of…Thanks for the article you guys are a voice for the community.

Ultimate Team has had similar problems, and the tougher challenges (i.e. those played on harder difficulty levels) also suffer from the cheap tricks of artificial difficulty. I haven’t played as much MyTEAM this year, but I agree that the pack odds aren’t good at all. It’s also ridiculous that a Throwback Pack only has a small chance of drawing a throwback player. By all means have a small chance of getting a top Legend, but a historical pack should be all about historical content.

Thanks for the kind words, glad you enjoyed the article!

I Think NBA LIVE 19 will be a strong game I’m genuinely excited for the series and the direction Live is heading, maybe they announce frostbite at E3? (I wish)

I’m feeling optimistic as well. It’s definitely going to be interesting to see whether they make the move to Frostbite this year.

No matter which way you slice it, difficulty in video games is static. Eventually, players learn to beat any game.

NBA games suffer from this. They don’t change to counteract what the players do. In game characters don’t express, in any way, what appears to be a desire to win.

Indeed. So far, the only solution has been to have the AI flip the switch and start playing unfairly. That’s what made the Real AI in NBA Jam: On Fire Edition so impressive, though it still had its limitations.

Remember Atari Basketball? The computer cheated – started getting more accurate – but at least it looked like it was getting into the game. The computer player would shake around, move faster.

I haven’t played that one, but some games have handled it better, no doubt.