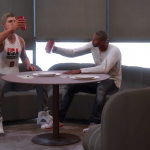 We’re at midcourt, and the ball is about to go up…it’s Monday Tip-Off! Join me as I begin the week here at the NLSC with my opinions and commentary on basketball gaming topics, as well as tales of the fun I’ve been having on the virtual hardwood. This week, I’m tipping things off with an out-of-the-box suggestion for the NBA side of MyCAREER: online team play.

When MyCAREER in NBA 2K17 brought us Orange Juice – both the story and dual player controls – I figured that the mode would continue to innovate in its mechanics. The ability to control two players and switch between your MyPLAYER and Justice Young was a novel concept, and underscored the theme of becoming the next great duo in NBA history. However, the NBA side of MyCAREER neither repeated nor built on this creative idea. Instead, the focus has been on mechanics such as Takeover and the online meta. It’s about finding the most powerful builds for online team play.

On one hand, this is understandable. The online scene is extremely popular, while NBA MyCAREER is beginning to gain a reputation similar to franchise modes, i.e. “that’s something for old heads”. That’s not to say that younger gamers don’t play the NBA side of MyCAREER, but gamers young and old are more frequently using it to level up their player for online team play. I believe there’s a missed opportunity here, for both gamers who prefer the online scene, and those who enjoy NBA MyCAREER. What if the two could be merged? No, I’m not talking about 2K Pro-Am, The Rec, or The Playground. I’m talking about an online multiplayer element to an NBA career.

This is actually something I thought they might be building towards after NBA 2K17. As I said, they’d already experimented with the idea of controlling someone other than your MyPLAYER with NBA 2K17’s Orange Juice controls. We already had online team play modes that were connected to yet still separated from NBA MyCAREER, so the next step in my mind was to bring that multiplayer action to what had always been a single player experience. Ideally, this would’ve been optional. If you wanted MyCAREER to remain a single player career mode, that would be feasible. However, it would also be possible for a friend – or friends – to be a part of your NBA journey. 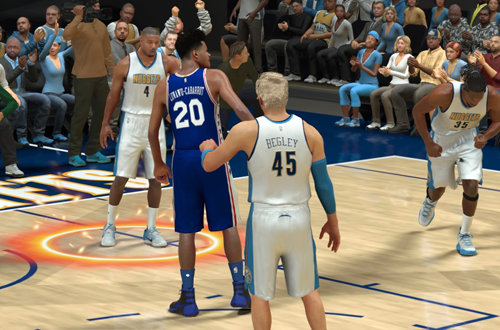 There is a precedent here as far as a combined single player/multi-player mode, albeit in an EA Sports game. Road Trip in NBA Jam: On Fire Edition can be played solo, or with a friend. This includes traditional local multiplayer with Player 2 picking up a controller on the same console, or a friend joining in your session through online co-op. Furthermore, you weren’t locked into a single or multiplayer Road Trip. At any time in your journey through the mode, you could play alone or have a friend join in as you preferred. This is just one of the reasons that NBA Jam On Fire Edition’s Road Trip is among the very best modes in basketball video games, arcade or otherwise.

It’s also proof that the concept is viable, and desirable. Admittedly, it would be more challenging to implement this approach in NBA 2K’s career mode, but there are a couple of ways that NBA MyCAREER could incorporate online team play. The first idea would be to allow a friend to join you in a MyCAREER, and assume the role of a teammate; perhaps a fictional player, or their choice of player/position that they’d be locked to. You’d then be able to play through your NBA MyCAREER together, with your friend replacing an AI Player and bringing the online team play experience to the NBA setting. For that matter, perhaps up to four friends could play a career with you!

Of course, the drawback with that idea is that only the host would be making progress with their MyPLAYER. It’d be an enormous sacrifice for your friends to make! With that in mind, the second approach would be a dedicated multiplayer/online team play version of NBA MyCAREER. This would obviously be easier to accomplish if it only accommodated one other MyPLAYER, but you could essentially revisit the idea of a new dynamic duo from the tale of Orange Juice; only, instead of having those dual player controls, a friend would join you to play the role of your teammate. You could even play the opposing role in each other’s games, both levelling up along the way. 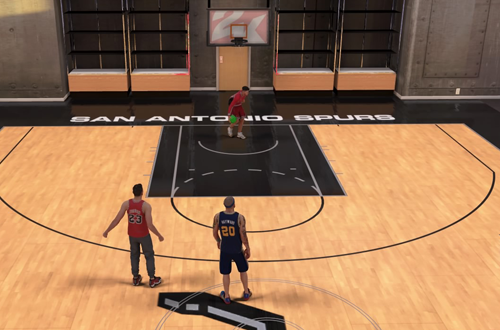 Bringing full online team play into NBA MyCAREER under this approach might be difficult, unless the scenario presented by the story could somehow accommodate five fictional players on the court at the same time. Mind you, even bringing one extra MyPLAYER into NBA career play would present some design challenges as far as traditional elements such as earning a starting role, being subbed out, and decisions involving role-playing elements. The ability to play on quarter lengths up to the full twelve minutes also clashes with the standard approach of shorter quarters in online team play modes. There’s a reason that Pro-Am, Rec, and Park are their own thing.

Indeed, the technical and design requirements of incorporating online team play into the NBA portion of MyCAREER are potentially insurmountable obstacles, and likely the reason why this hasn’t been explored. It’s an ambitious idea that would have to be done very carefully to work properly, and there’s only so much that developers can do within a single development cycle. While I expected it to be the next step at the time, looking back and considering the difficulties of implementing such an idea, it’s not at all surprising that it hasn’t happened. However, as long as NBA MyCAREER remains a connected mode, I believe that it is a concept that’s at least worth considering.

If nothing else, it’s one of the few things that NBA 2K hasn’t done with MyCAREER as yet. We’ve seen multiple cinematic stories serving as a prelude to our NBA career, co-starring some noteworthy names from Hollywood along with cameos from NBA players. Those stories have experimented with us beginning our career late in the season, playing through high school and college careers, and dealing with frustrating setbacks upon reaching the league. The mode has adopted an open world approach with The Neighborhood and The City, even going on a cruise in the prior gen version of NBA 2K22. Once again, there were the dual player controls in NBA 2K17. 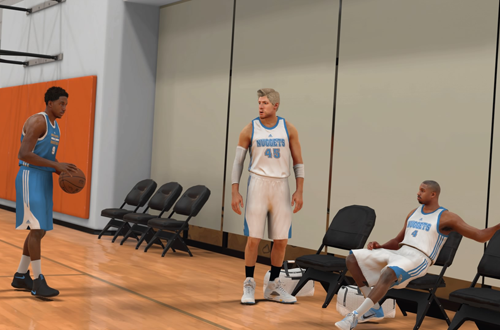 That leaves the concept of a multiplayer NBA MyCAREER, possibly through the optional integration of online team play, as unexplored territory; a gimmick as yet unused. As I acknowledged, there are reasons for this in the form of multiple details that would need to be ironed out, but it would be revolutionary if it could ever be accomplished. It would also be something new in a mode that barely ever changes beyond storyline-induced scenarios that affect playing time, some of which are just frustrating rather than being interesting story beats. For gamers who enjoy both the NBA side of MyCAREER and online team play, it could be the best of both worlds.

Now, if you want to argue that online team play and NBA MyCAREER are simply incompatible, there are other ways the latter could be enhanced in future games. An obvious idea is to separate the single player experience from the online scene. This could allow NBA MyCAREER to remain accessible when the servers are shut down, with the story and basic functions such as assigning on-court accessories remaining intact. There are obvious advantages to the modes being connected, especially if you later decide you want to venture online. However, a traditional “offline” MyCAREER would cater to gamers that want nothing to do with an increasingly toxic online scene.

It could also benefit online gamers if they didn’t have to touch the NBA portion of MyCAREER, should they not have any interest in it beyond using it to grind. This also means more generous starting ratings and a different approach to grinding, which I’m all for, but don’t expect to happen. It would be great if the server shutdowns didn’t mark the end of NBA MyCAREER as well, though. The fun that I’ve had revisiting NBA 2K14 PlayStation 4 to play through multiple seasons is a testament to just how enjoyable an NBA-focused career mode can be. It may not be the most popular mode anymore, but it still has a following, and could use some innovation in future games. 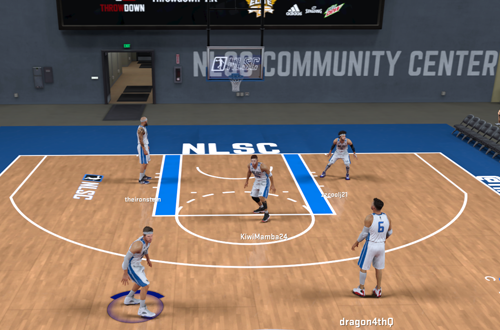 Should the concept of online team play in NBA MyCAREER prove to be unfeasible, then a possible separation of the single player and multiplayer experiences could be the next best thing. At the very least, it could facilitate other ideas to spice up the mode, such as local multiplayer. The ability to take part in a friend’s MyCAREER by assuming the role of one of their teammates (or all of them, if player locked gameplay isn’t a necessity) would still be new, and different. Yes, the connected experience does have its benefits, but it also means that the online scene holds a traditionally single player mode hostage, both in its availability, and its potential for further innovation.

Ideally, NBA 2K’s MyCAREER would be able to cater to all of these preferences: an offline version of MyCAREER that never goes away, a connected version that allows you to jump into the existing online team play modes, and the ability to play NBA games with local and online multiplayer functionality. It’s easier said than done, and even if it’s technologically possible, there are advantages to the current approach. There’s also the matter of interest. To me, this is a creative idea that would encourage me to return to MyCAREER in a future NBA 2K release, and see what it’s like to play with friends. Many gamers are probably satisfied with what the game currently offers.

On top of that, there are more pressing issues to be resolved in both online team play, and NBA MyCAREER. There’s the need for proper balance in gameplay. The online scene desperately needs in-depth matchmaking, as I’ve said on so many occasions. Improvements could be made to the rate of progression, Badge effects, and the impact of the story. Those are all important, and I’d agree they should take priority over an ambitious idea like this one. Nevertheless, it remains an intriguing concept that’s worth considering. It’s uncharted territory in a genre that has already explored and implemented a variety of modes, and it invites creative solutions to make it a reality.