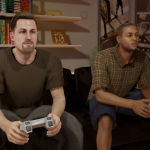 We’re at midcourt, and the ball is about to go up…it’s Monday Tip-Off! Start your week here at the NLSC with a feature that’s dedicated to opinions, commentary, and other fun stuff related to NBA Live, NBA 2K, and other basketball video games. This week, I’m tipping things off with a look at the perennial default outfit for all of our MyPLAYERs: a brown shirt and grey sweatpants.

Am I really supposed to talk about basketball video games in the wake of the Game of Thrones finale? Well, that is what we’re all about here at the NLSC, so yes; I’ll keep my focus on the virtual hardwood! After the heaviness of that finale however, I feel like tackling a lighter subject to tip things off this week. I’m usually not one to talk about fashion – these are not Barbie dress-up games, as we’ve been reliably informed – but I am going to talk about clothes this week. More specifically, I’m talking about the outfit that our MyPLAYER wears at the beginning of every MyCAREER game.

The brown shirt and grey sweatpants that we continue to sport at the beginning of our journey on the Road to 99 has become a staple of the MyCAREER experience. As a default outfit, it’s visually unremarkable, yet still full of meaning as far as the whole experience is concerned. Interestingly, it’s a look that more than a handful of gamers are actively choosing for themselves, at a point where a majority of MyCAREER and Playground devotees are opting for more outlandish outfits. Humble attire as it may be, those brown shirts and grey sweatpants are something of a running gag, a clever gimmick, and a deceptive tactic all rolled into one.

Although it’s established itself as the perennial default outfit for new MyPLAYERs, when the concept of player clothing was introduced with NBA 2K13’s MyCLOSET, our player sported different garb. Rather than the distinctive brown shirt and grey sweatpants, they wore a plain white shirt and blue pants. In fact, if you were playing the PC version of NBA 2K13, that was the only custom outfit that you’d ever wear, as the lack of VC in the PC release meant no closet and no purchasable clothes. It didn’t really matter as there weren’t too many places your player would sport that outfit, but it was a sign of things to come as far as VC was concerned. 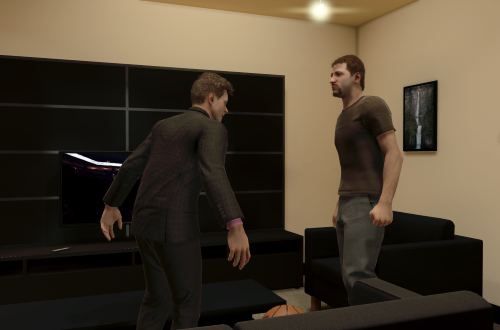 Make no mistake: our player could be sporting more fashionable gear at the start of a MyCAREER game, or at the very least, a new generic outfit every year. Wearing the brown shirt and grey sweatpants has become shorthand for identifying a new player, though. Because most of us will be inclined to prioritise ratings upgrades over any cosmetic items, you can generally spot a low-rated player in The Neighborhood by their use of the default clothing. The outfit is quite distinctive despite being plain, so there’s naturally a certain stigma attached to it. Needless to say, this is intended to prompt us to grind or pay for VC so that we can appear less generic; less of a noob.

In that respect, it’s a sign of how MyCAREER has lost some goodwill in recent years, as is the change in NBA 2K18 preventing clothing items from being shared with any additional MyPLAYERs that we create. Even pre-order clothing items are locked to the first player they’re assigned to now, which means that the brown shirt and grey sweatpants will likely be showing up in a lot of cutscenes early on. This trend began with the introduction of the story-driven approach in the PlayStation 4 and Xbox One version of NBA 2K14, which established it as the apparently fashionable look for players who aspire to one day make it to the NBA.

Given that buying new clothes requires online components that are lost whenever a game’s servers are shut down, it’s also the outfit that we’re stuck with if we dust off an old title after online support ends. This makes the brown shirt and grey sweatpants also stand as an unfortunate sign of the times: retro basketball gaming is becoming less and less accessible with a greater push to force gamers to buy the latest title, even if they’re primarily offline players to begin with. With that in mind, it’s not surprising that the default outfit is so plain and visually unappealing. It’s intended to be replaced, and not returned to years down the line when a much newer game is on offer. 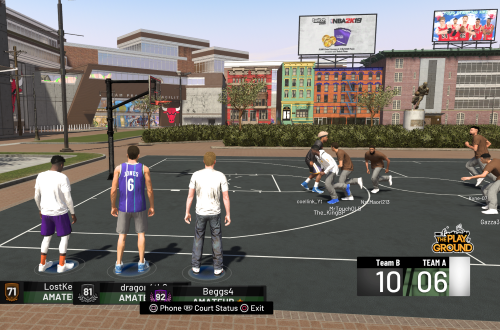 That may sound cynical and like I’m reading too much into virtual clothing, but it all adds up. All of that aside, as I noted before, the shirt and pants are generally a sign that the player is new, and that the person on the sticks is inexperienced as well. Of course the latter isn’t necessarily true, and in fact, it’s becoming something of a bluff. Sporting the default outfit is an effective means of posing as a newbie, and I’ve run into a few players wearing brown shirts and grey sweatpants in The Playground who play a lot better than their ratings (and outfit) would suggest. Whether it’s intended as a ruse or is merely part of a self-imposed challenge, it’s seemingly becoming a trend.

While some may consider that sneaky – and it’s certainly another indication of how NBA 2K could stand to implement proper matchmaking – it’s also a poignant lesson about not getting cocky and judging a book by its cover; or in this case, a player by their rating and the clothes they’re wearing. It does recreate the experience of playing at the park and underestimating an opponent because of their clothing, physique, or mannerisms. Unfortunately, when it comes to finding teammates and getting a few games in, for players who are wearing the brown shirt and grey sweatpants because they are in fact new, it does lead to the snobbery and elitism I discussed last week.

As for the story cutscenes in MyCAREER, it stands as a rather blatant example of what TV Tropes calls “Gameplay and Story Segregation“. NBA 2K19 in particular is quite the offender when it comes to this trope, as A.I. is shown wearing a variety of outfits during The Prelude, many of which would make for good unlockables upon playing through the story to the end. Instead, it seems that upon making the NBA, A.I. has decided it would be for the best if he discarded his entire wardrobe for an iconic look: brown shirt, grey sweatpants. Then again, considering how much it must cost to live in The Neighborhood, maybe he needed to sell all his clothes to make rent! 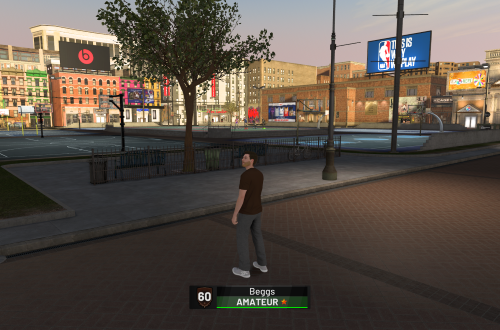 Despite their plain design and connection to problematic practices such as snobbery and VC gouging, there’s an odd charm to the brown shirt and grey sweatpants. As the perennial Uniform of Starting Over, they can also be a tremendous bluff, a source of pride whenever you defeat an opponent who underestimated you because you haven’t spent a ton of VC on cosmetic items. All the same, if you find yourself swimming in VC at a certain point on the Road to 99, no one would begrudge you for picking up some new duds while you’re working towards the next Cap Breaker. After six games, you may well feel like updating your look with an expanded wardrobe.