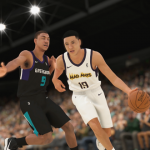 We’re at midcourt, and the ball is about to go up…it’s Monday Tip-Off! Start your week here at the NLSC with a feature that’s dedicated to opinions, commentary, and other fun stuff related to NBA Live, NBA 2K, and other basketball video games. This week, I’m tipping things off with a few thoughts on how I’ve become burned out on career modes in basketball video games.

As I’ve mentioned on the NLSC Podcast and in a few previous articles, I’m feeling a strong desire to return to my roots as a franchise gamer. Years ago, I spent most of my time with NBA Live playing Dynasty mode, documenting my experiences in the Stories section of our Forum. Despite the strength of Association mode in NBA 2K, when I finally started to warm up to Visual Concepts’ series, MyCAREER turned out to be the mode I got hooked on. I also found myself enjoying the connected modes, primarily 2K Pro-Am. My gaming habits had certainly changed.

However, I now find myself looking to make another change, and return to the kind of experience that I played almost exclusively for so many years. That’s partly due to the fact that with MyLEAGUE and MyGM, franchise modes have never been better or deeper. They’re very appealing in their own right, but I’m also encouraged to return to them because the single player career experience has worn thin for me. While both NBA Live and NBA 2K are looking to do some tremendous things with their career modes this year, it’s coming at a bad time for me. After several years of playing them – particularly MyCAREER – I’m feeling quite burned out.

That’s not to say that I’ve come to dislike career modes as a concept, but by their very nature, they do have a few key drawbacks. I’ve previously discussed how painful it is starting over from scratch each and every year, especially when you’ve reached a particularly high level. The inability to carry any of your progress over to the next game therefore contributes to a tough grind. You’ve got to level up again, unlock or buy the animations you like, and restrict your game because you’re no longer capable of doing the things you could easily do with your levelled-up player in the previous release. It’s a process that becomes extremely tedious. 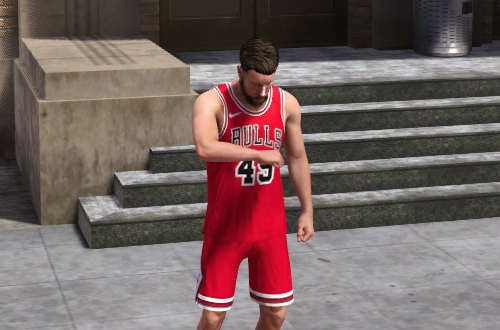 Even if you don’t mind starting over, career modes really monopolise your time. The same could be said of other deep modes in basketball games, but the sheer amount of grinding you have to do in order to level up your player – especially if you are also going to take them online – means that you really can’t spend a lot of time with other modes. If you do decide to take a break from your career or give up on it entirely, it might be too late in the year to really get invested in anything else. I have had fun building up my MyPLAYER for MyCAREER and 2K Pro-Am, but the time it takes every year has left me feeling like I’ve missed out on other modes I want to play.

Throw in the issue of microtransactions – an element that has continued to be more and more problematic in MyCAREER and its connected experiences – and starting a new career every year becomes even more of an undesirable chore. One of the most common complaints about MyCAREER in NBA 2K18 was that it felt like you really had to work hard and suffer through a tough slog to get to a point where it was fun to play and you were capable of being competitive online (or pay for the privilege of fast tracking your player to that point). It’s a situation that I’ve grown weary of, and even if things are better in NBA 2K19, it may be too little, too late; for me, anyway.

This also poses a problem with NBA Live 19, where a lot of focus has been given to its career mode, The One. The One has taken a very refreshing approach to the career experience with different types of connected modes, and the decision to eschew pay-to-win mechanics. This is very welcome news for basketball gaming in 2018, and should hopefully aid in making NBA Live 19 a successful release for EA Sports. However, even having a more consumer-friendly approach to a career mode doesn’t really address the issue of feeling burned out. As I said last week, I want to see the traditional experience and NBA content in NBA Live 19 receive more attention, too. 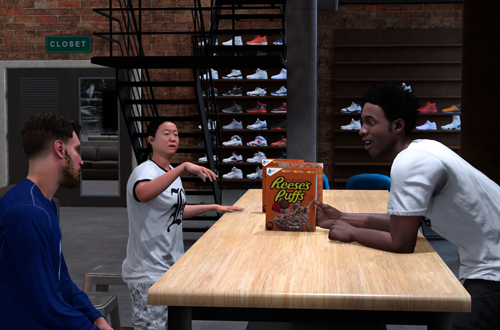 At the risk of harping on the issue ad nauseum, the story-driven approach to career modes has also contributed to me souring on the experience, and feeling burned out. Some of the stories have been – to be blunt – pretty bad. Even if they’re well-produced and reflect a lot of effort by the developers, I’ve found them intrusive. From contrived moments to feeling like I’m basically having the same experience as everyone else at every turn, they’ve made MyCAREER in particular more about lengthy cutscenes and playing through a narrative of varying quality, rather than telling your own story on the virtual hardwood. At this point, the approach no longer feels fresh or innovative.

The ability to skip cutscenes (and The Prelude in its entirety in subsequent games) is a great improvement in NBA 2K19, and I was very glad to hear the news. It’s addressed a key problem with MyCAREER this generation – NBA 2K18 in particular – but for me, it comes at a point where my frustration has already built up and boiled over. As much as I dislike the sneering rhetoric that is thrown about when overdue additions and improvements are made to basketball games, the reality is that sometimes, you’re too burned out on a mode for it to really matter. I’m glad that these changes have been made and absolutely must give credit where it’s due, but I needed them years ago.

Ultimately, I think this aspect of the career experience in both basketball games is one of the most important things to address. Enjoyable gameplay is paramount (as it is in all modes), and depth keeps us hooked with all the requisite bells and whistles, but the issue of starting over from scratch, and knowing we’ll have to do it again next year, is a conceptual problem that needs to be resolved. Staleness in the story-driven approach is also something to keep in mind, since as I said, it’s no longer as revolutionary and innovative as it was when we saw it in NBA 2K14. The connected online experiences add a new dimension these days, but they’re affected by these issues as well. 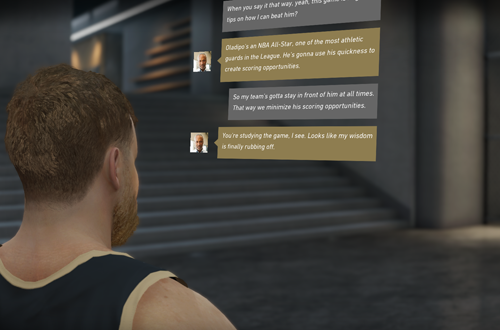 My suggestions for keeping career modes fresh and minimising the likelihood that gamers become burned out on them are as follows. Introduce multiple stories and starting points, for greater variety and replay value. Allow gamers to play through the mode without a story entirely, while still keeping the RPG elements and online modes of play. Avoid tedious grinding and introduce returning gamer/loyalty bonuses that can provide a one-time boost to your player when the new game detects a save file from last year. If the games have a fairer progression system, and/or progress carries over to the next year, then it should greatly reduce feelings of frustration and burnout.

It’s probably going to be a moot point for me this year. I will spend some time with The One and MyCAREER of course, if only to offer an appraisal of them for the sake of detailed reviews and impressions on our podcast. I’d like to see how well they fare so that I can offer up some constructive feedback on them. I don’t see myself being as invested as I have been in recent years, though. Instead, I’ll opt for the team building and franchise modes. I need to take a break from career modes – initially, at least – because I just don’t find them as fun or appealing as I did a few years ago. When there are other modes on offer, it makes no sense to stick to one I’m tired of.

At the end of the day, that’s what it comes down to. Gripes aside, I feel it’s time for a change. When I look back, it’s probably one of the reasons I drifted from franchise modes to career modes in the first place. They were new and fresh, a change of pace to what I’d been playing for several years at that point. It feels like a good year to take a break from a mode that demands a big investment of time, and spend more of those hours in one that I’ve been yearning to return to. I can see myself going back to career modes at some point, and maybe even dabbling a little with them this year, but I must acknowledge my burnout, and remedy the situation by finding enjoyment elsewhere.

Tagged with: 2K Pro-Am Monday Tip-Off MyCAREER NBA 2K19 NBA Live 19 The League The One The Playgrounds The Streets

You and I are on the same track right now; one of the reasons I’m shying away from career is because I’m a primary park player, and there’s no way to put this other than bluntly: you always end up with a total asshole on your team, and he usually always has a mic (it’s gotten to the point where I immediately mute teammates with a mic icon upon entering a game). There’s a certain point where these people need to be humbled and someone needs to shout at them that no one cares what they think, but there are always Payton’s and Garnett’s in the real league, so perhaps it’s a bit realistic, lol.

Gaming in general, I’ve been gradually becoming more of an offline than online gamer, which I never thought I would see the day; the idea of trying to outsmart a human (who can adapt to you) always appealed to me more than trying to beat a CPU, however there are some positives to an offline experience: online gaming encourages addiction. Like someone could be calling me or ringing the bell and I would either have to pause with the potential of my timer running out (and in park you can’t even pause), ignore the outside distractions (which is not right) or just quit.

Even MyTEAM hasn’t thrilled me lately, even seeing how they brought in B-Roy (Arenas would be the icing on the cake). I’m probably eyeballing a 75% franchise/25% career experience this year (always subject to change). I hope to stick with one player and kind of project myself to the NBA so it’s a more personal experience and I have an attachment to the character, other than just replicate T-Mac or something.

It’s nice to know I’m not alone in the feeling! I think it’s inevitable after sticking with one mode for so long, and with the grind, starting over, and all that, it can become more of a chore. That’s where I’m at with it right now.

I’ve always been more of an offline gamer. I always loved the franchise experience, managing a team and living out my “What If” scenarios and front office fantasies. I’ve been into Pro-Am the last couple of years, but soured on the experience (along with MyCAREER as a whole) in NBA 2K18. It definitely feels like it’s time for a change. Online is a lot of fun but has its drawbacks with poor sports, snotty kids, lag, and all that. Playing with randoms is pretty bad too, it’s a lot more fun if you have a regular squad with people you get along with. It’s not always feasible, unfortunately.