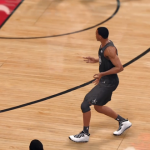 We’re at midcourt, and the ball is about to go up…it’s Monday Tip-Off! Start your week here at the NLSC with a feature that’s dedicated to opinions, commentary, and other fun stuff related to NBA Live, NBA 2K, and other basketball video games. This week, I’m tipping things off with clips from two recent comeback victories I earned in NBA Live 18 Ultimate Team.

As I’ve discussed in a previous article, and on several episodes of the NLSC Podcast, Ultimate Team has been my mode of choice in NBA Live 18. I’ve put together a team of 90s All-Stars that are quite fun to play with, and have generally allowed me to have a lot of success in the mode. However, some of the recent challenges have been…well, quite challenging, albeit mostly due to some cheap play by the AI. It’s resulted in few frustrating losses, though also some very rewarding victories. Over the past week, I managed to earn a couple of comeback wins that felt very satisfying.

After fighting back to pick up the victory in dramatic fashion in both games, I knew I had to keep the footage of the final minutes for posterity…and for an NLSC feature. Here for your enjoyment are the final moments of my two games against the Central Division Legends and this week’s Team of the Year Challenges. Catch it here on our YouTube channel if you can’t see the embedded video.

Even though blowout victories are fun in their own right, it’s very gratifying to be able to pull off wins like that in basketball games, especially when the CPU hasn’t been playing fair. Even though there were several moments of frustration throughout – and I do believe the tougher difficulty levels will need to be better balanced in NBA Live 19 – the furious rallies and final result made them two of my favourite games that I’ve played this year. Have you had any exciting wins in NBA Live 18 or NBA 2K18? Have you been playing Ultimate Team or MyTEAM? Let me know in the comments below, and please subscribe to our YouTube channel for more video content.