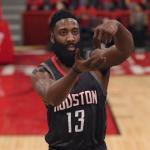 We’re at midcourt, and the ball is about to go up…it’s Monday Tip-Off! Start your week here at the NLSC with a feature that’s dedicated to opinions, commentary, and other fun stuff related to NBA Live, NBA 2K, and other basketball video games. This week, I’m tipping things off with a few thoughts on how NBA Live 19 could complete a triumphant comeback for the NBA Live series, after years of struggles.

When Michael Jordan made his first comeback in 1995, it was obvious that he was a little rusty. Although His Airness had his moments as the Chicago Bulls made a run during the second half of the season and ultimately lost to the Orlando Magic in the second round, he wasn’t quite at the same level he had been when he walked away from the game in 1993. There were number changes – to 45 and back to 23 again – and an offseason of hard work that saw MJ return to form in the 1996 campaign. The Bulls won a then-record 72 games, and by the time he retired for the second time, MJ had led them to three more titles. Undoubtedly, his first comeback was a success.

To draw a parallel to basketball video games, the NBA Live series currently finds itself in a similar situation. Once the yardstick and the top-selling five-on-five sim-oriented NBA title, NBA Live went on hiatus in 2010, following the failure of NBA Elite 11. After switching back to the NBA Live moniker and returning to the virtual hardwood, the series has been trying to shake off the rust and recapture former glory. It’s had its bright moments though, with NBA Live 18 being a significant step in the right direction. With that in mind, EA Sports has a great opportunity to make like Michael Jordan in 1996, and successfully complete its own comeback.

While NBA Live 18 didn’t exactly make a dent in NBA 2K18’s sales, it proved to be a respectably successful release for EA Sports. Thanks to the game being offered at a bargain price several times since launch, it’s produced stronger digital sales. It was the second most downloaded game on PlayStation 4 in February, with more and more gamers looking to give it a chance. Beyond that, the reception has been more positive than it has been in years, with the game showing noticeable improvement. There is certainly still much room for further improvement, but NBA Live appears to be on the right track, and has made significant progress since NBA Live 16. However, the job isn’t done yet, and the comeback isn’t complete. Even though many people – myself included – have enjoyed NBA Live 18, there are still issues that must be addressed. There need to be more animations – signature and generic – and they need to be more fluid and life-like. Gameplay needs to be more strategic with players and teams playing like their real life counterparts. Modes must be deeper, and certain concepts, like simming a week at a time in Franchise mode, need to be revamped or replaced. The newly added roster editing needs sharing facilities, head-to-head play needs to be expanded, and there’s more content that could feasibly be added.

That’s just a very brief summary of an extensive Wishlist that we recently submitted to the NBA Live development team. There’s a lot that can, should, and must be done with NBA Live 19 in order for it to be another satisfactory step forward; another step towards the series being on par with, and a viable alternative to, NBA 2K. I’m sure that the development team will be looking to build on the promising success of NBA Live 18, and in that regard, they will have a fantastic opportunity with NBA Live 19. Topping NBA 2K19 in sales and reception may still be a lofty goal, but it could mark a successful comeback in terms of NBA Live’s relevance and overall quality.

Just as Michael Jordan hit the gym hard during the 1995 offseason in order to return to his old form and seek new glory, this production cycle has to be a big effort for NBA Live. Basically, the game needs to go back to doing what it was doing so well in the late 90s: innovating and improving across the board. In all fairness, there’s only so much that can be done in the space of the year, but NBA Live 19 needs to be a step forward in all areas. Again, gameplay needs to keep getting better. Animations and control fluidity must continue to improve. Deeper and more engaging modes are vital. New content, and old staples that need to make a comeback, should be present.

It remains to be seen whether or not NBA Live will move to the Frostbite engine, and if so, when. As I understand it, it’s not an easy process, and something the team would likely have to work on in the background. For the moment, it seems like they have a fairly solid foundation sticking with IGNITE, with NBA Live 18 making the best use of the engine to date. Whatever efforts may be going on behind the scenes in order for NBA Live to transition to Frostbite – if indeed that’s in the cards – the most will have to be made of the IGNITE engine in the short term. There can’t be any missteps or regression, no resting on the laurels of NBA Live 18’s respectable comeback. Beyond the improvements to gameplay and modes in NBA Live 18, EA converted on a three-point play by demonstrating a lot of goodwill. Beginning with a demo that was updated with content and gameplay fixes, they subsequently offered NBA Live 18 at a lower price point several times in the months that followed, and continued to avoid pay-to-win mechanics. As a company, EA are trying to rehabilitate their image in the wake of the Star Wars: Battlefront 2 controversy, but as far as the NBA Live series is concerned, the goodwill has been there in recent years. They’d be wise to keep it up, especially with Visual Concepts’ “recurrent revenue” strategies coming under fire.

With all that being said, realistically, the job won’t be done with NBA Live 19. No matter how good the game may be, the one year production cycle will ensure that there will still be room for improvement. It would be impossible to achieve all of the game’s goals, or fulfil every item on the Wishlist, in one year. That’s fine, though. If we draw further comparisons to MJ’s first comeback, if NBA Live 19 is another significant step forward in all areas, then it will be like the Bulls’ 72-10 regular season record: noteworthy, impressive, but a bigger prize still awaits. However, it could still be viewed as a successful comeback in terms of returning to form and contention.

Even if a successful release for NBA Live 19 can be seen as completing a comeback for the NBA Live series, that won’t be the end of the tale. In fact, it should ideally herald a new beginning; a new golden era for the series, comparable to the status it once enjoyed. That’s placing a lot of expectations on a single title, but after the strides that were made in NBA Live 18, it’s imperative that those flashes of brilliance amount to something more in the years to come. In NBA Live 19, EA Sports will have a great opportunity to achieve what they’ve been attempting with the series for arguably over a decade now: propel it back to relevance and success as a viable NBA sim title.

The opportunity cannot be wasted. There can be no changes in direction, nothing that will result in regression and setbacks. There can be no postponements, and certainly no cancellations. There must be pleasing improvements across the board. There must be a hook that will appeal to the audience at large. It must be the best NBA Live game of the current generation, and favourably comparable to previous high points in the series. Personally, I’m optimistic, but the patience of gamers has been tested, and there will be fewer and fewer opportunities to get it right the longer it takes. I certainly hope that the team at EA Tiburon seizes this chance, and completes the comeback.