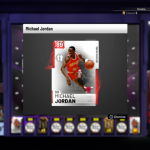 We’re at midcourt, and the ball is about to go up…it’s Monday Tip-Off! Start your week here at the NLSC with a feature that’s dedicated to opinions, commentary, and other fun stuff related to NBA Live, NBA 2K, and other basketball video games. This week, I’m tipping things off with a few thoughts on double-dipping with basketball games on multiple platforms.

As someone who grew up playing a variety of video games on both computers and consoles, I’ve never cared for PC vs Console wars. I’ve enjoyed the hobby on both platforms, with the benefits that they each provide. Whether I’ve played a game on PC or console depends on whether or not it’s available on all platforms, the hardware I’ve had at my disposal, and if multiplayer is involved, which platform my friends are on. Of course, there are some games that I’ve enjoyed so much that I ended up double-dipping and buying them on a second platform as well.

Needless to say, basketball games are among the titles I’ve double-dipped with. In fact, when it comes to NBA 2K, I’ve double-dipped in recent years with the PC and PlayStation 4 versions; the former for single player gameplay and modding, and the latter for online play with the other members of the NLSC squad. While it’s worked out for me, in particular helping out with content creation and news coverage, I have to admit that one version of the game has usually somewhat gone to waste. With the amount of time we can sink into basketball games these days, it’s difficult to get the most out of a title on two different platforms. This year, I’m trying to remedy that.

I know I’m not the only basketball gamer who has double-dipped, at least from time to time. When the original Ultimate Base Roster came out for NBA 2K12, it encouraged a lot of long-time console gamers to pick up the PC version when it was on sale, just to try it out. Modding has obviously been a consistent advantage of the PC platform across a variety of video game genres, and the work produced in our community has been effective in getting hoops gamers to switch or at least double-dip. As mentioned, I like to get the PC version of NBA 2K every year for mods and content creation, but the bigger userbase on PlayStation 4 does make it significantly better for online play. 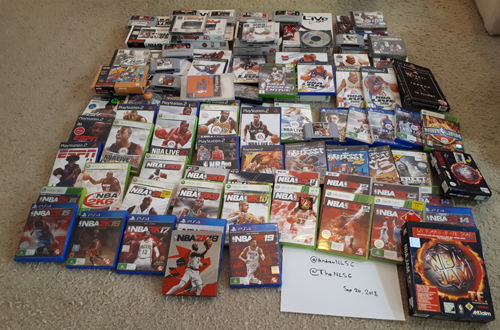 Even before I got into playing basketball games online, I’d double-dip. In the early days of the NBA Live series, the console versions were different to the PC release, and I enjoyed experiencing some of the unique features they had to offer. Consoles were also easier to take away on family vacations. During my early years of running the NLSC, the console versions often came out before the PC version (and of course, NBA Live 2002 was a PlayStation 2 and Xbox exclusive), so being able to double-dip on PS2 helped me get a start on reviews and other coverage. Therefore, for personal and creative reasons, I’ve double-dipped on several occasions.

The problem, as I noted before, is that it’s hard to make time to thoroughly play the games on both platforms. Juggling a couple of different titles is tough enough, but at least they can offer their own experiences. I can pick and choose the modes that I play in NBA Live and NBA 2K, rather than doubling up and playing something similar. I would be more likely to double up with a second copy of NBA 2K, which means one platform is going to fall by the wayside. With all my efforts to grind up a player for the online experience on PS4, it’s the PC version that’s ended up being the neglected copy in my collection. It’s unfortunate, given my history with PC basketball gaming.

It isn’t the first time that I’ve ended up spending more time with the console version of a basketball title, though. As I mentioned, a couple of generations ago, it was common for the PC version to be released slightly later than all the console versions. While I spent a lot of time with NBA Live 2004 PC, both playing the game and making roster updates (including a 1996 season mod), it was in the PS2 version that I experienced my memorable Bulls Dynasty. It had been my intention to get into a Dynasty on PC but the PS2 version dropped first, I got hooked on the game that I started, and the rest, as they say, is history. 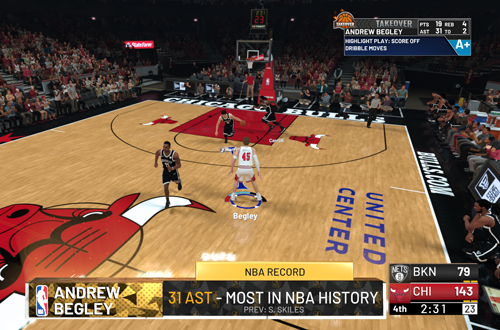 I’ve felt more regret about not being able to spend as much time with two versions of NBA 2K, since as I noted, there’s a lot more to miss out on these days. The idea of playing a lot of single player on PC and keeping the PS4 version for online play hasn’t worked out as well as I’d hoped. Even if you give in to the push and pay for quicker upgrades, you still need to grind for Badges so that your MyPLAYER is as effective as possible. Beyond that, you can simply get hooked on playing MyCAREER, leaving little time for anything else, let alone on two platforms. Since I’m also eager to spend time with NBA Live, the 2K titles in my Steam library have ended up collecting dust.

Mindful of that habit, I’ve taken a different approach this year. I’ve been eager to get back into franchise gaming for a few years now, so I’ve started a MyLEAGUE game on PC. Whenever a Locker Code has been released for MyTEAM, I’ve punched it in on both platforms; it’s actually been interesting to see how my luck has differed in the two versions! I played through The Prelude in MyCAREER on PC, something that I haven’t done before since I was already sinking so much time into the mode on PS4. Even though I have spent a bit more time with NBA 2K19 on PS4 to grind up my player for online, I’ve made better use of my PC copy than I have in quite a while.

Having two versions of NBA 2K19 has made for some interesting moments in The Neighborhood of MyCAREER. Aside from comparing my luck on the daily wheel spin, I’m currently doubling my attempts to win the VC jackpot in Trivia. If I know the answer, or am fairly confident in my guess, I’ll naturally choose the same answer on both platforms. If the question has me completely stumped and I’m unable to pick between two likely answers, I’ll choose one on PC and the other on PS4. On more than one occasion, it’s demonstrated that I should go with my gut feeling, especially when I end up being eliminated on PS4, where I really need the extra VC! 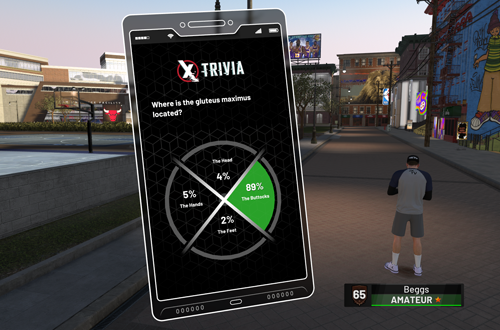 Double-dipping has never broken my budget, but it does feel good to be getting my money’s worth out of both platforms this year. Heading into 2019, with several more months of playing NBA 2K19 and NBA Live 19 ahead of me, I feel like I’ll be able to get the most out of each game. I’ve even gone back and spent a bit of time with other recent PC versions of NBA 2K. Some of those hours that I’ve clocked were for NLSC content, but they’ve also been for my own enjoyment, as well as a sense of completion with Steam Achievements. NBA 2K Playgrounds 2 and Basketball Classics will also be in the rotation, in an effort to have the most fun I can on the virtual hardwood.

Another reason that I’ve double-dipped with basketball games has been to expand my collection. I’ve found fun in picking up some gems in recent years, but I’ve also been filling out the collection with different versions of titles that I already own. This has included the PlayStation versions of early NBA Live games, as well as a couple of the prior gen versions of recent NBA 2K titles, just to see what they’ve been like. It’s been useful having many of these basketball games on hand for NLSC content (particularly Wayback Wednesday, obviously), but it’s also satisfied my own curiosity about what different versions of titles are like, and what I may have missed out on.

All in all, while I’ve regretted not being able to spend as much time as I’d like with certain basketball games on specific platforms, I don’t regret double-dipping. It’s given me options, facilitated content, and in some cases, allowed me to go back and enjoy a title all over again. I’ve found satisfaction in amassing a collection of games that I’m passionate about, and indulging my fondness for occasional retro gaming. If the price is right, there are some good reasons to pick up basketball games on a second platform; our modding community has created several! It’s wise not to double dribble on the virtual hardwood, but if you’re like me, you may want to double-dip.