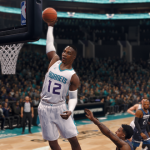 We’re at midcourt, and the ball is about to go up…it’s Monday Tip-Off! Start your week here at the NLSC with a feature that’s dedicated to opinions, commentary, and other fun stuff related to NBA Live, NBA 2K, and other basketball video games. This week, I’m tipping things off with a few thoughts on how we can be better fans and critics, and avoid being haters and fanboys.

In one of the earliest Monday Tip-Off features that I posted, I discussed the issue of fanboys and haters in the basketball gaming community. Glancing back at a couple of the comments, I perhaps didn’t explain my point clearly enough. Needless to say, it’s virtually impossible for anyone to be completely impartial. We’re all going to have our own preferences, and a bias that’s tough to completely put aside. To a certain extent, a strong devotion or aversion to a brand is a justified reaction to continued enjoyment or disappointment. Taken to the extreme, however, we just end up getting on each other’s nerves, and ultimately doing ourselves a disservice.

The motto I’ve adopted in regards to the NLSC is “fans, not fanboys; critics, not haters”. In other words, we should look to enjoy basketball gaming and celebrate our hobby, but at the same time, we shouldn’t shut down criticism and pretend that there aren’t any problems. Similarly, we should point out the things that we dislike and make constructive criticisms, but we shouldn’t blindly bash the games, nor tell our fellow gamers that they shouldn’t enjoy themselves. It’s easy to forget that enjoyment and criticism aren’t mutually exclusive, and that we’re not all divided into fanboys and haters. At least, we certainly shouldn’t be aiming to be in one of those two groups.

As much as I feel that the term “haters” is thrown around too much these days – quite often by people who claim not to care about them, oddly enough – clearly there is a contingent within any gaming community that is militantly negative, hostile to not only the developers but also anyone who dares enjoy a game they dislike. They’re the ones who constantly bash a game instead of offering constructive criticism or a fair appraisal, sometimes without ever actually playing it. You’ll see them gleefully mocking a game’s shortcomings (or perceived shortcomings), and trolling its social media pages. As I said in my previous article, that behaviour puzzles me. To me, focusing that much on something that you hate is an unhealthy waste of time. I’d much rather invest my time and energy into the things that I like, rather than the things that I don’t. When it comes to constructive feedback, or simply a productive and enjoyable discussion, haters don’t bring anything to the table. They’re heavily invested in their point of view, and in their eyes, anyone who doesn’t agree with them is nothing but a fanboy. They’ll throw around words like “sheep” with a tone of mock pity. They’ll cling to snarky buzzwords, and never really offer up any reasonable critique that a developer could actually put to good use.

Of course, fanboys engage in very similar behaviour. Fanboys see haters everywhere. Any criticism they don’t agree with – and in extreme cases, any criticism at all – will be categorised as hating. They’ll quite often describe it as “whiny”, regardless of the actual tone. In that sense, fanboys tend to be bad for constructive feedback too, seeing it as an affront to a product that they support unconditionally. A devotion to a game you really like is understandable, certainly more so than rabid hatred for one you’re not forced to buy. At the same time, you don’t need to tolerate or deny flaws in a game, nor shut down all criticism of it, just because it’s your brand of choice.

With that in mind, we may be inclined to ask ourselves which is worse, and ultimately more destructive to the basketball gaming community? Haters can certainly bring about bad publicity and exaggerate criticism, which reflects badly on a community by making it look petty. On the other hand, mindless bashing can also be dismissed rather easily. In a way, fanboys are more harmful when it comes to giving feedback, because they’re more inclined to insist everything is fine, and shut down criticism with a myriad of excuses and appeals to be patient. There’s merit in patience and understanding limitations, but not in discouraging honest and important feedback.

I’ve noticed a trend towards balking at criticism in the basketball gaming community, with a lot of reasonable and constructive feedback being unfairly labelled as whining, bashing, or hating. It started with NBA Playgrounds back in May. A lot of gamers were excited to finally get another arcade basketball title, and because of their enthusiasm, they wouldn’t hear a word against it. Good suggestions and fair observations were shot down, often harshly. In the months that have followed, opinion has changed somewhat. It seems like a lot of people have realised that their fellow gamers weren’t being haters, but actually bringing up valid concerns. As much heat as Visual Concepts has taken for the aggressive implementation of microtransactions in NBA 2K18, there’s been no shortage of apologists. Their arguments usually come down to blaming the consumer (“just don’t buy VC!”), a twisted appeal to realism (“it’s a virtual world with items to buy; do you get stuff for free in real life?”), or selfish myopia (“I don’t have a problem with it/I don’t play those modes, therefore it’s not a real problem”). Never mind the lack of goodwill, with gamers being encouraged to spend money to level up quicker to remain competitive online. Apparently, the only complaints are coming from “whiny haters”.

We’re seeing a similar attitude with NBA Live 18. This year’s game has made some pleasing strides over its immediate predecessors, and it’s rightfully being praised for heading in the right direction. However, there is still room for improvement, and it’s in our best interests to point out areas of the game that we’d like to see get better. It’s all well and good to say “it’s all about gameplay”, but the lack of roster editing and depth in the game modes is a legitimate criticism. Likewise, the new LIVESTRIKE events are not going to appeal to everyone, so it’s not fair to shout gamers down for being honest about their lack of interest in the mode, or in-game clothing.

“Fans, not fanboys”; We can enjoy a basketball video game and have plenty of nice things to say about it, while also expressing disappointment at things we dislike, and offering suggestions as to how the game could be better. Whether it’s content, a particular mechanic, or an issue with in-game currency, we should speak up. “Critics, not haters”; we can express negative criticism in a constructive way, avoiding insults and petty bashing, and depending on the overall quality, still enjoy a game while also identifying its flaws. Honest, constructive feedback doesn’t qualify as “hating”, any more than speaking positively of a mode or feature automatically makes you a fanboy.

Tone is important, of course. Comments that go out of their way to be rude and insulting are unhelpful at best. Consider our own modding community. If you were making a mod, what kind of feedback would be most acceptable: an honest but polite reaction to your work that points out the good and the bad, with suggestions on how to improve, or a snarky, profane rant that offers a lot of insulting commentary but no useful critique or pointers? I would suggest that the former is the preferable approach. Getting back to basketball gaming as a whole, if you truly do hate it that much and don’t believe that you’ll ever be satisfied, it might be time to find a new hobby. Echoing what I said in the introduction of last week’s Friday Five, a community that censors, bans, or discourages criticism is doing a disservice to the games they’re dedicated to. Of course, a community that wants to be taken seriously by developers shouldn’t indulge in bashing and hating, either. To that end, community leaders may insist that certain topics are for constructive feedback only, while allowing venting in other discussions. That’s generally been our approach, and I believe it’s allowed us to have our say and get complaints off our chest, while also devising good, constructive feedback that is helpful to the development teams at EA Sports and Visual Concepts.

If a community demands its members tiptoe around and never express any criticism, it’s cultivating a toxic environment. The same goes for a community that sneeringly rejects any positive opinions. That’s why my motto for the NLSC will always be “fans, not fanboys; critics, not haters”. We can be fans of NBA Live, NBA 2K, and other basketball games, enjoying what they have to offer. We’re also allowed to be critics, pointing out problems and the ways that the games could be better. No fanboys, no haters: just avid basketball gamers who know their stuff, and want to see the games continue to improve, in order to have even more enjoyable experiences.