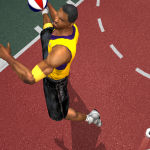 We’re at midcourt, and the ball is about to go up…it’s Monday Tip-Off! Join me as I begin the week here at the NLSC with my opinions and commentary on basketball gaming topics, as well as tales of the fun I’ve been having on the virtual hardwood. This week, I’m tipping things off with a discussion of fixing and enhancing old mods.

It’s vital to know when to step back and stop working on a creative project. You may be familiar with the phrase “put down the brush”; the advice given to painters so that they can declare a piece finished, and avoid ruining it with unnecessary changes. The brush is quite literal there, but as a metaphor, it applies to any art or creative work. In video game and software design, it may take the form of “feature creep“. Just as extra brushstrokes can spoil a painting or stand in the way of its completion, a game or app can become bloated or delayed indefinitely if you don’t “put down the brush”.

The same goes for a creative endeavour that our community enjoys: modding. It’s all too easy for projects to be pushed back, or indeed never released, because we get hung up on minor details that aren’t a problem, or can be fixed later. It’s the reason why Version 1.0 doesn’t need to be the best and definitive version of a mod. To that point though, once the work is out there, we can always go back and try to fix a minor issue, or add further detail and content. This obviously happens quite often, but what about particularly old mods? Frankly, I’m all for it! Just because a mod is old and largely “finished”, there’s no harm in releasing new fixes and further enhancements.

This is something I’ve been thinking about following some of my Parsec sessions with Dee. We’ve revisited a number of classic basketball video games, and will enhance the experience with various roster mods. A couple of times, we’ve played with mods that I’ve made, such as the 2013 season roster update for NBA Live 06, and the 1996 season roster for NBA Live 2004. It’s been a long time since I originally released both of those projects, and outside of a couple of fixes to the 1996 mod for 2004, I haven’t worked on them since. Although I had fun playing with my own creations, I was also cringing, and mulling the possibility of picking up tools to work on those mods again. 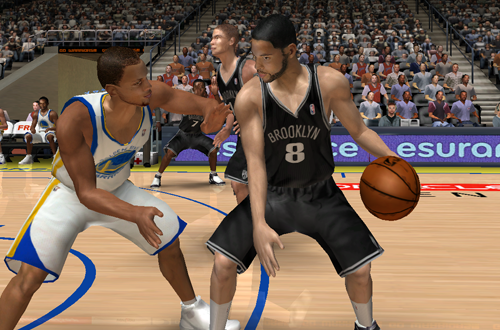 Why was I cringing? I noticed some errors – particularly in the 2013 season update for NBA Live 06 – which I somehow overlooked. It’s not that I didn’t know what I was doing, or that I didn’t care about my work, but I was definitely burned out on roster modding by that point. Maintaining updates for four games simultaneously increased the chances of making mistakes and not catching them while double-checking my work, particularly when everything was functional. I’m talking about quality control issues, such as values that I didn’t fix after converting the NBA Live 08 roster for use with NBA Live 06, resulting in errors with Freestyle Superstars movesets and the like.

Do they ruin the experience? Well, Dee and I still had fun, and I don’t recall getting any complaints about them back in the day. They were mostly limited to the Dream Teams I added to the roster as bonus content, and the ratings were still accurate; it was just the assignment and activation of FSS movesets that I’d overlooked. Still, I cringed because I did always take pride in the quality of my roster updates, and here were some very noticeable flaws. If I combed through the roster, I might find a few more, or other ways that I could enhance a release that’s otherwise mostly complete. The same goes for the 1996 mod for NBA Live 2004, and likely other projects, too.

With that in mind, why not load up a few old mods and see what can be fixed and enhanced? It wouldn’t take as long as creating a brand new mod from scratch, and it would be great for retro basketball gaming; my own, and anyone else who feels like dusting off some old favourites. Even if there isn’t a huge audience for them now, it would still bring me peace of mind, and be good for my own use. This is something that I believe we often overlook with big projects. Some people enjoy creating mods more than they do playing the games, and that’s fine. However, it’s great if you can also enjoy the fruits of your labour by having fun with a major mod that you’ve made. 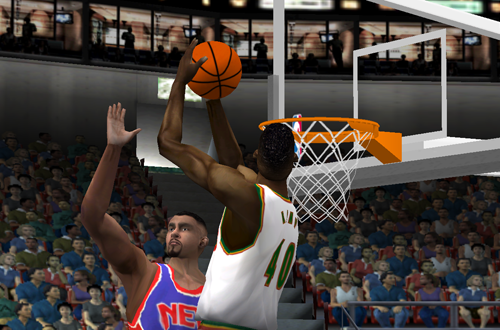 To that point, if you’re going to fix up old mods for your own enjoyment, why not share that updated work with the community? If I’m going to fix the Freestyle Superstars movesets in my NBA Live 06 rosters, I might as well upload that file so that anyone else revisiting the game can have a better version of my mod. It’s also an opportunity to improve the distribution method. In the most recent version of my 1996 mod for NBA Live 2004, I did away with the installation routine in favour of folders of files, and instructions on where to extract them. Files were being misplaced far too often with the setup exe, so it was a chance to make an old mod more user-friendly.

As retro basketball gaming gains popularity, making old mods as accessible and detailed as possible is a worthwhile exercise. One of the challenges we used to have in the heyday of NBA Live modding was keeping file sizes manageable. Even if we had the storage space for the upload, large archives were a problem before fast broadband became commonplace. As such, big roster mods were split into multiple parts, with art updates often being optional add-ons. Now that that’s no longer a problem, we could enhance and re-upload those old mods as complete packs, while once again also streamlining the installation process for anyone who wants to try them out today.

Of course, there are some potential drawbacks to fixing and enhancing old mods. A major concern is that minor fixes may seem pointless, especially to gamers wanting a more substantial update. Along those same lines, it may inadvertently raise hopes that a newer update is in the works, when all you’re doing is polishing up an old project for pride, posterity, and providing a better retro gaming experience with a mod that’s already been released. Maybe it’s lingering traces of my burnout, some of which came from the pressure to release complete updates. Returning to old mods could open the floodgates on that frustration, and might also unintentionally disappoint some people. 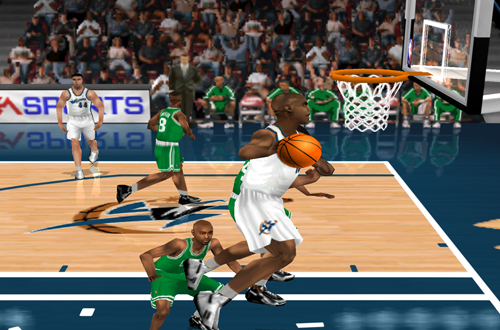 For example, if I was to fix those issues and upload a minor update to a 2013 season roster for NBA Live 06 PC, it does invite questions about an update for more recent seasons, or perhaps resuming updates for 2023. I’ve seen it happen many times with other modders who are basically retired or taking a break from the hobby, when they return with a quick fix or update to work they’ve already released. Inevitably, they’ll get requests for new work, or questions about a comeback. It’s ultimately harmless, and as long as you’re polite, it’s worth shooting your shot (so to speak). It can be annoying to a modder though, especially if they’ve been clear about their intentions.

However, this is part and parcel of being a content creator in a modding community. As long as you’re honest about your intentions and gracious when responding to any questions and requests, you’re doing the right thing. The possibility that someone will be unreasonable shouldn’t deter you from seeking satisfaction through fixing and enhancing old mods. That it’s a concern of mine speaks more to my lingering burnout than it being an unwise or unworthy idea. Furthermore, that’s not to say that going back to an old project won’t inspire the creation of new ones, particularly if it’s clear there’s an audience for it, and the work you’ve done provides a valuable head start.

Once again, I’m tempted to make these fixes for my own enjoyment if nothing else, but if I’m going to go to the trouble of improving upon my previous work, I might as well share it for the benefit of the community. I’ve already dabbled with the idea via a couple of updates to the 1996 mod for NBA Live 2004, so I’m open to giving other old mods a second look. In fact, I’ve even thought about fixing my old rosters for NBA Live 96 PC that I made over twenty years ago! I’m sure there are errors and oversights I made due to working with fewer resources than what’s available today, leaving room for improvement with a definitive version; a director’s cut, if you will. 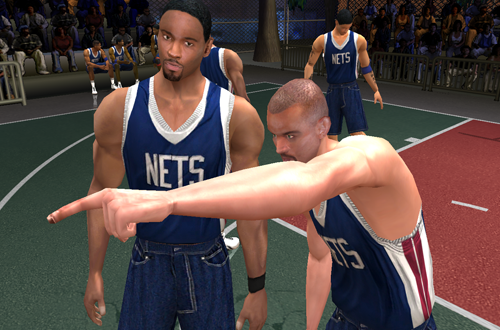 While this is an endeavour to undertake with our own work, it could certainly apply to other old mods that are no longer being maintained. As I mentioned, there are some mods from the heyday of NBA Live on PC that could be enhanced through being re-released as complete packages. There are probably some old NBA 2K mods that could benefit from that as well. In many cases the original creators have long since moved on, so I’d suggest that as long as credit is given, it wouldn’t be inappropriate to repurpose assets to improve upon existing work. Fixing technical issues, such as the crashes with the NBA Live Street 2003 mod, would be great for retro gaming.

Essentially, if the modder that created the original work is no longer around to ask, I believe it’s fair to treat it as open source as long as credit is given, and we’re willing to remove their work if they return and express any objections. This also speaks to the benefits of open source modding, and being willing to collaborate and share work to facilitate fantastic roster projects. I understand being particular about having your hard work reused and granting permission for it, as stolen work has led to drama in the past. I’ve also seen how exclusivity and ego have held the community back, which is why I’ve re-evaluated my stance and now advocate for an open source approach.

I’m sure we can handle those situations maturely and in a way that benefits the whole community, if and when they arise. As far as going back and polishing up your own old mods though, there should be no drama there, and I’ll enthusiastically advocate for doing so. Even if it’s just correcting a couple of ratings or jersey numbers, or a small issue that has gone unnoticed, if it bugs you upon discovering it, it’s worth your time to fix it. Maybe it’ll inspire you to create new work, or maybe it’ll just give you peace of mind. Moving forward, if I find myself cringing at old work, I’ll be considering picking up tools and making the necessary fixes. It’s never too late for a Version 2.0!