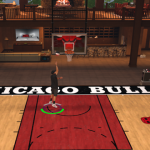 We’re at midcourt, and the ball is about to go up…it’s Monday Tip-Off! Start your week here at the NLSC with a feature that’s dedicated to opinions, commentary, and other fun stuff related to NBA Live, NBA 2K, and other basketball video games. This week, I’m tipping things off with a few thoughts on the future of green releases in NBA 2K.

A few weeks back, NBA 2K Gameplay Director Mike Wang made a candid statement about the future of green releases. Beluba’s goal is to wean basketball gamers off the concept of green releases being guaranteed baskets, in order to strive for more realism and competitive balance. We’ve seen NBA 2K17 take a few steps in that direction, with several tuning updates focused on shooting mechanics being pushed through since the game’s release. Generally speaking, those updates have sought to reduce the number of green releases by making them more difficult to achieve, tweak the percentages of near-perfect releases, or re-balance the shooting in some other way.

Results have been mixed, and a lot of gamers have expressed frustration with the constant changes to shooting in NBA 2K17. On top of some tweaks seemingly being either too effective or largely ineffective, there’s been a concern that changes that are made in order to enhance the online experience are negatively affecting single player gameplay. Beyond that, opinion is divided as to whether green releases should be guaranteed baskets – assuming the attempts aren’t blocked, of course – or whether they should simply have the best odds of being made, according to a player’s ratings and attributes. I have to admit, at times I’m a little torn myself.

The argument in favour of green releases being guaranteed baskets is that it represents a perfectly aimed shot, particularly when combined with the right stick aiming introduced in NBA 2K17. It’s a reflection of precise timing and skill on the part of the user, a just reward for mastering the controls. With the way that the CPU can seemingly rig the dice roll on its shot attempts when it needs to score, it also provides gamers with an effective weapon that leaves nothing to chance. If properly balanced, it doesn’t need to be cheesy. In a game between two users, it separates skilled gamers from novices, again rewarding mastery of the shooting mechanics. Conversely, the argument against green releases always going in is that it’s a fine idea in theory, but problematic in practice. It’s difficult to find that perfect balance, and without it, shooting can become very cheesy. In a game that aims to be sim, a method of scoring a guaranteed basket is counterintuitive to that goal, even if it does take precise timing to pull off. Since certain shooting animations do make it easier to nail a perfect release, building deadly shooters for MyCAREER, MyPARK, and 2K Pro-Am often comes down to specific blueprints. It’s a mechanic that lends itself to old school “video game tactics”, which feel cheap and out of place in a modern basketball sim.

Funnily enough, we’ve been having this debate since 2010. NBA Elite 11 was to feature right stick shooting, providing gamers with more control over shot attempts and a means of overriding the dice roll. Frankly, it turned out to be a bigger issue than the infamous Bynum glitch, being an exploit in the core gameplay mechanics rather than an odd bug that some people ran into in the demo. Even looking past the problem of hook shots being triggered for successful three-pointers, the main drawback was that it made shooting too easy, once you figured out the timing and the aiming window for a player. The concept had merit, but the execution invited exploitation.

I’d say that NBA 2K17 was able to implement the concept to better effect, but some of the same issues have definitely arisen. If you can master the timing on your release – something that can be made even easier with the customisation afforded by the Jump Shot Creator – it’s quite feasible to override the restrictions of MyPLAYER Archetypes. Now, the restrictive nature of the Archetypes is a problem in and of itself, but as it stands, green releases can really skew the offensive balance that they were striving for. At the same time, I have to admit that it is a very handy mechanic to have, and I’ve certainly benefitted from it myself.

As such, I often find myself in two minds about the matter. I like the idea of rewarding a perfectly timed release and mastery of the controls with an effective offensive weapon, but it’s also cheap, and in many ways, not exactly sim. I certainly understand why Beluba would like to wean gamers off the approach, and move towards something that’s more balanced and realistic. NBA Live 16’s approach to shooting has given us all something to think about in that regard. An optimal release results in a shot attempt having the best possible chance of being made, as determined by a player’s ratings and attributes. There are no guaranteed buckets. Of course, that approach can be problematic as well. It’s easy to feel cheated when attempts that are well-timed and barely contested (or indeed, wide open) aren’t falling, especially if the CPU seems to be making shot after shot with ease. That arguably comes down to what we’re conditioned to expect as gamers though, which is essentially “correct input equals positive result”. Shots in NBA Live 16 that should be high percentage do tend to be quite reliable, and the approach of “high percentage, not guaranteed baskets” could feasibly be adapted to NBA 2K’s mechanics. The concept of green releases doesn’t need to be scrapped completely; just re-worked.

I think that all NBA 2K gamers would agree that a perfectly timed shot release should result in some kind of bonus to the shot’s chances, or represent the best possible chance of making the shot according to the player’s abilities. I certainly like the idea of green releases being made far more often than not; a wide open miss on a green release with a great shooter should obviously be a rare occurrence, and to that end, defensive pressure would have to play a role in the success rate of green releases. I’d also suggest that if green releases become “highest percentage” instead of “sure thing”, the percentage should be higher for layups and post shots, compared to threes.

Consideration will also need to be given to near-perfect releases. A couple of the tuning updates for NBA 2K17 have sought to address this, but in my observation, slightly early or slightly late releases – i.e. a fully white shot meter – aren’t as dependable as significantly early or late releases. Whether perfectly timed shots (as represented by green releases) can’t be missed or are simply very rarely missed, near-perfect releases should logically be the next tier down in terms of success rate. At the end of the day, competitive balance and realism will be paramount, in both online and offline gameplay.

Obviously, not everyone is going to be happy with any potential changes to green releases, just as not everyone is satisfied with the current approach. There are two distinctive schools of thought here, both of which have merit, and two passionate contingents of basketball gamers arguing each point of view. I can see both sides of the argument, though given NBA 2K’s goal of being a realistic basketball game, I believe that whenever there are issues with balance and realism, the developers need to explore all possible solutions. If the current approach is retained then I expect I’ll probably still enjoy playing NBA 2K18, but I am in favour of some changes here. Judging by Beluba’s remarks, there will indeed be some changes to green releases in NBA 2K18. As long as jumpshots remain fairly and realistically tuned and green releases continue to represent a quality attempt, then I for one can certainly get on board with that. Of course, I have to admit that I’d probably miss the satisfaction and security of knowing that a green release is definitely going in. At the same time, there would be drama and excitement in the unknown, realism in the fact that shots that feel good when they leave your hands don’t always find their mark (but also still do, of course). Done properly, it could make shooting mechanics much more realistic.