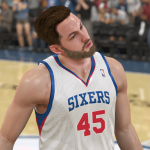 We’re at midcourt, and the ball is about to go up…it’s Monday Tip-Off! Join me as I begin the week here at the NLSC with my opinions and commentary on basketball gaming topics, as well as tales of the fun I’ve been having on the virtual hardwood. This week, I’m tipping things off with some reflections on how it’s been impossible to put NBA 2K14 MyCAREER aside for very long.

We’re approaching the tenth anniversary of NBA 2K14’s release. Not only was the PC version one of the most well-received and heavily-modded games in our community, but the PlayStation 4/Xbox One version was one of the most impressive launch titles in basketball gaming history. Of course, NBA 2K14 hasn’t been a frequent part of my rotation for the last ten years. As I’ve discussed in several articles and on the NLSC Podcast, sourness towards the brand and some iffy first impressions turned me off the game for years. Revisiting it on a whim in 2021 completely changed my mind!

Despite my burnout on MyCAREER, revisiting an earlier iteration of the mode in NBA 2K14 reminded me of why I was drawn to the career experience in the first place. When NBA 2K21 and NBA 2K22 failed to hold my attention, playing through multiple seasons in NBA 2K14 MyCAREER became a staple of my gaming habits for over a year. I put the game aside when NBA 2K23 came out, wanting to give the new release my full attention and a fair chance. Although I’ve enjoyed NBA 2K23 far more than its immediate predecessors and it remains in my rotation, so does NBA 2K14. Even if I’m not playing it every day, it isn’t long before I fire it up again.

Of course, that’s in large part because I still have unfinished business. Yes, I’ve hit enough career milestones to induct my NBA 2K14 MyPLAYER into the Hall of Fame when I’m ready. However, there’s still one more to tick off – making five All-Star teams – and other accolades to strive for. There’s an ongoing narrative that’s developed quite organically through gameplay and player movement. Each season so far has had its own twists and turns. Terry Hanson‘s benching and season-ending injury has turned Year 5 on its head! It’s left me considering a trade demand, or trying to get Michael Carter-Williams traded and Johnny Davis ousted as the head coach. 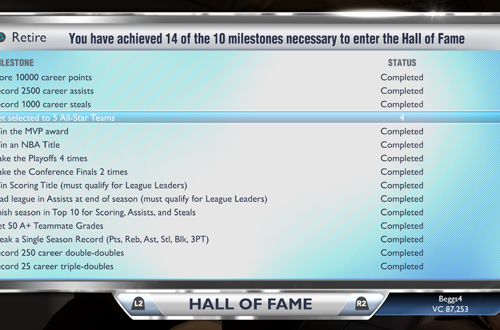 At this point, the longevity of my NBA 2K14 MyCAREER is a major draw to me. It’s undoubtedly more appealing than grinding to level up my MyPLAYER in NBA 2K23 and enduring its awful story. There’s history there, history that I’ve written through my gameplay. More than any other MyCAREER game I’ve played, it actually feels like I’m playing through an NBA career, thanks to being five seasons in. On top of that, I really enjoy playing the games in NBA 2K14 MyCAREER! In many ways, it feels better on the sticks than NBA 2K23, which makes the game very appealing to return to. With that in mind, why should I ever resolve to put NBA 2K14 aside permanently?

Indeed, with the game’s tenth anniversary looming, I’m even more inclined to see if I can play my NBA 2K14 MyCAREER through to the current day. There’s still a ways to go, especially if I avoid simulating any games as I have thus far. It’s not impossible though, and depending on how hooked I am by NBA 2K23 as the weeks go by, it may not be too long before I’m into the 2020s in my NBA 2K14 MyCAREER. There’s something really novel about that concept: using a past game to play into the future, which is now the present. Even putting aside my influence, it’s been interesting to see how an alternate NBA history is shaping up, now that I have reality to compare it to.

To that end, I’m taken back to simulating years into the future in NBA Live 2000 PC in that first iteration of Franchise mode. Back then, the final year represented in that mode – 2024 – seemed so far away and futuristic. Now that it’s in the near future and tangible, it’s strange to go back to a game from 1999 and sim through to the 2020s! NBA 2K14 obviously isn’t that far into the past, but there’s still a lot that’s occurred in ten years that won’t happen in the reality of my MYCAREER. The rise of the Golden State Warriors, LeBron James’ return to Cleveland and his third championship, player movement that shaped the course of the league…none of that has happened there. 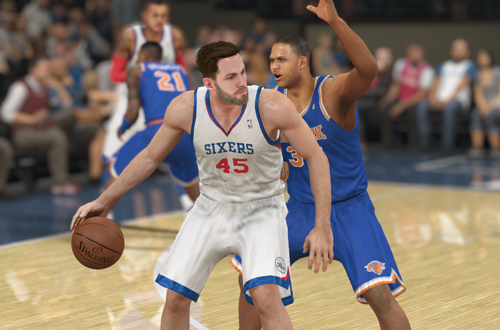 It’s not just the comparisons to real life, either. Five seasons into MyCAREER in NBA 2K14, I’ve played through the same campaigns I’ve experienced through MyCAREER in other NBA 2K titles. Thanks to “Livin’ Da Dream“, I only played nine games of the 2016 season in NBA 2K16. In my NBA 2K14 MyCAREER, I played the entire season! NBA 2K17 was a very memorable year for me playing a full season in MyCAREER along with 500 games of 2K Pro-Am. I’ve obviously played it again in NBA 2K14, this time from the perspective of an established star in his fourth season and with fictional rosters. Eventually, I’ll replay the 2019 and 2020 seasons.

I’ve also played through seasons that I haven’t completed in the games that were actually set during that year. Upon winning the 2015 NBA Championship – in fact, simply by finishing the regular season – I made further progress in NBA 2K14 than I had in NBA 2K15! I’ve reached a point in 2018 where I’m further along than I was when I put NBA 2K18 aside and never picked it up again. That unfinished business between NBA 2K17 and NBA 2K19 – two years where I played at least the first year in MyCAREER – will be completed in NBA 2K14. If I can get through to 2023, I’ll have played two seasons that I never experienced in NBA 2K21 and NBA 2K22.

Come to think of it, there’s a much higher chance of me finishing the 2023 campaign in NBA 2K14 than in NBA 2K23! Again, it speaks to the quality of the experience on the sticks, as well as MyCAREER itself. It’s not that I haven’t enjoyed NBA 2K23’s gameplay at all, and there’s some depth in its MyCAREER that would be nice to have in NBA 2K14. However, there’s also a bevy of tiresome off-court activities that make it a chore, to say nothing of an inferior story and a long grind that looks even worse compared to the fun journey in older games. Even with less depth in certain areas, NBA 2K14’s MyCAREER is far more appealing and enjoyable than NBA 2K23’s. 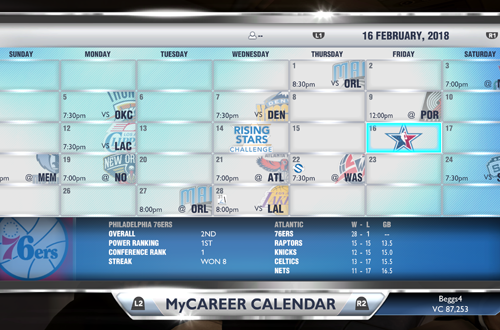 With that being said, NBA 2K14 MyCAREER does have its drawbacks, especially compared to other strong iterations of the mode. The lack of player movement is painfully apparent a few years in, with journeymen enjoying far longer stints than they ever have in real life. A future in which star players become more nomadic was also something that NBA 2K14’s player movement logic couldn’t predict. There are stats screens that are inaccessible in menus where they’re supposed to be, and the All-Star Weekend keeps getting pushed further into the following week when the new schedule is generated. I have some concerns about the long-term stability of that save.

Mind you, I can at least rest assured that I won’t be losing that file due to an inevitable server shutdown, nor will the mode be rendered inaccessible. That’s a huge factor in my willingness to pick up my NBA 2K14 MyCAREER again after putting it aside; as long as I take care of the save file, it’ll be available to play for a long time to come. It’s also why I’m actually glad that I got into the mode as a retro gaming experience rather than when it was new. NBA 2K14’s own server shutdown rendered all online saves inaccessible, a controversy which ultimately led to a change in 2K’s policy regarding the length of online support. I avoided that heartache by starting offline, years later.

I feel no guilt about my reluctance to put my NBA 2K14 MyCAREER aside. Again, when it continues to be so enjoyable, why shelve it just because it’s an older game? If there’s one thing my gaming habits over the past couple of years have taught me, it’s that I’d become too focused on getting on the grind every year, and trying to enjoy games that I just wasn’t feeling. Revisiting old favourites and giving games a second look has allowed me to build a rotation of titles that I’ll play as the mood strikes. Some of them will make more frequent appearances than others, and there’s room for newer titles like NBA 2K23, but I won’t put an old game aside just to look trendy. 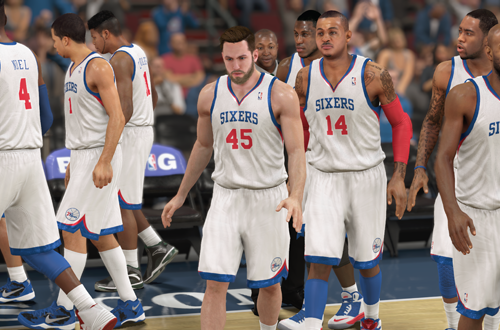 That’s not to say that I’ll necessarily be playing NBA 2K14 as frequently as I was some months back. After four full seasons on twelve minute quarters, I did need to take a break and check out some different games. There are other titles that I’ll be alternating with, and some that are overdue for a second look with fresher eyes. It’ll be a constant, though. It’s a save file that I can always make progress in, and an option to consider whenever I feel like throwing on a basketball video game but can’t decide on which one to pull out of my vast collection. It’s a reliable palate cleanser if I’m getting frustrated with NBA 2K23, or don’t feel like playing any of its modes at that moment.

As I’ve discussed before, my earliest memories with video games – and not always having the latest hardware growing up – has given me a predilection for retro gaming (retro obviously being a relative term). I’m not against playing the newest games, but I don’t view older titles as disposable or completely outmoded. I can go back and play Fallout 3 and Fallout: New Vegas for the umpteenth time, either starting all over again or continuing a saved game. Despite mechanics that many people feel are too outdated to enjoy now, I can still play the PS2-era Grand Theft Auto titles. And of course, older basketball video games are still accessible and hold tremendous appeal.

I still can’t put NBA 2K14 MyCAREER aside permanently because there’s still fun to be had with it. I can of course shelve it and pick it up again whenever I want, because I don’t have to worry about the ticking clock of a server shutdown placing a deadline on getting everything done. It remains a blast to play, and there are so many intriguing scenarios on the horizon, from Carmelo Anthony and Terry Hanson’s future to trying to throw my weight around as the star. It may have begun as a curiosity, but now that it’s produced one of my most treasured virtual hardwood experiences, NBA 2K14 has graduated from extended retro kick to an all-time favourite that I’ll eagerly revisit.