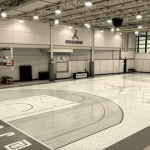 We’re at midcourt, and the ball is about to go up…it’s Monday Tip-Off! Start your week here at the NLSC with a feature that’s dedicated to opinions, commentary, and other fun stuff related to NBA Live, NBA 2K, and other basketball video games. This week, I’m tipping things off with a few thoughts on the importance of consistent controls in NBA Live and NBA 2K.

The preview seasons for NBA Live 18 and NBA 2K18 are tantalisingly close…presumably. We should get another glimpse at NBA Live 18 this weekend at EA Play, and with Live scheduled to come out this year, hopefully 2K won’t drag their feet putting out information, especially since they’re once again pushing early pre-orders. In any event, it hopefully shouldn’t be too long before we start hearing about improvements and changes to gameplay mechanics, AI, modes, and all other aspects of the games. Controls will be a key point of interest, specifically whether or not there have been any major changes or enhancements.

When it comes to the responsiveness and fluidity of the controls, as well as their depth and influence over the action, it’s probably safe to say that most of us still want to see some further improvement. It’s vital that we have control over advanced moves, don’t get stuck in animations or experience too many canned moments, and not suffer stiffness or a lack of responsiveness on the sticks. Beyond those mechanics however, there’s an important design concept that EA and 2K both need to keep in mind: the controls should be relatively consistent from year to year.

It’s inevitable that controls in basketball video games will evolve, sometimes being drastically different from what we’ve experienced in past releases. New ideas that give gamers more control over the action and ultimately enhance the gameplay experience are going to result in noticeably different configurations and concepts from time to time. It’s a part of the learning curve upon picking up a new game, and if the changes aren’t convoluted or contrived, experienced gamers shouldn’t have too much trouble adjusting to them, enjoying the new controls once they’re familiar. At the same time, radically overhauling the controls with each new game is far from ideal. While seasoned basketball gamers can generally adjust to new controls reasonably quickly, it’s preferable not to be forced to adapt with every new release. There’s an element of artificial difficulty at play there, with the challenge not coming from enhancements to the AI, but rather the fact that gamers have to learn the new configurations and mechanics. If the gameplay doesn’t feel more challenging or any better than the previous game once the new controls have been mastered, they’ll come across as gimmicky. In the worst case scenario, it’ll seem like a change merely for change’s sake, especially if the new controls are clunky and cumbersome.

That’s definitely going to be the feeling when an approach that was working fine is changed in a way that seems contrived, such as shifting an action to a button or trigger that is less convenient, or a method that’s more complex than it needs to be. When a particular action has been performed a certain way for a long time, it’s frustrating not only to have to learn the new controls, but also try to make the most out of a controller configuration that feels awkward. Whenever it feels as though EA or 2K have tried to fix something that wasn’t broken, it’s generally a sign that the changes to the controls probably weren’t for the best.

Fortunately, neither NBA Live nor NBA 2K has made too drastic a change to their controls for at least a couple of games now. Aside from removing manual control over a couple of advanced moves and adding the Playcalling Wheel, EA hasn’t revamped the controls since NBA Live 14, which was already similar to previous titles in the series. The biggest changes 2K has made have been the Pro Stick in NBA 2K14, the expansion to three pass buttons in NBA 2K16, and the Pro Stick aiming in NBA 2K17. Most control configurations tend to be used for at least a couple of games, with new concepts being phased in, or serving as refinements to the existing controls.

You really have to go back several games before the controls start to feel foreign, which is ideally how it should be. This indicates that the approach has remained consistent, and the transition to new controls has been relatively smooth. Unless there are glaring problems that need to be addressed, or some revolutionary idea – as was the case when basketball games first started making use of dual analog sticks – building on the established controls and tweaking them for greater depth and convenience is the smarter approach. I believe both games have done a good job of that in recent years, with their current approaches being very solid for the most part. Of course, beyond the configuration of the buttons, triggers, and sticks, it’s also very important that core control mechanics such as shot meters or Pro Stick aiming remain reasonably consistent as well. Between NBA 2K16 and NBA 2K17, the shot meter was changed from an ideal release point in the middle of the meter with green, yellow, and red indicating the quality of the timing, to a perfect “green release” point (now a guaranteed basket, barring a block) at the end of a filled semi-circle, with less visual distinction between a good, decent, and bad release. Additionally, shot timing is now a factor on layups in NBA 2K17, an approach that isn’t to everyone’s liking.

I believe that most basketball gamers have been able to adjust to those changes fairly easily, but nevertheless, it’s best that those mechanics – like the button configurations themselves – don’t change too readily or drastically with each new release. WWE 2K (formerly Smackdown vs. RAW) is an example of a series that has, through various releases, gone back and forth too often with different control schemes and gameplay mechanics. I often felt like I was losing something from the previous game’s controls that had worked well, and I’d quite liked. When I go back and play older games in that series, I find that I need to look up the controls, as they were always changing.

Needless to say, controls should change when something isn’t working, or a new concept can make them even better. In that respect, there’s also some room for experimentation. I was sceptical about NBA 2K’s offensive controls being expanded to three pass buttons, but I’d have to admit that it’s worked out pretty well for the most part. Shifting Isomotion moves to the right stick in NBA 2K13 was also a good decision. On the other hand, EA’s decision to abandon NBA Elite 11’s new control scheme was a great move that corrected course following an idea that bombed. Consistency doesn’t mean a stubborn refusal to change when change is necessary.

As it stands, I don’t think major changes are needed to the controls in NBA Live 18 or NBA 2K18. NBA Live could use some more depth to allow manual control over certain shots and passes, and there’s obviously debate as to how NBA 2K should handle green releases, but aside from that, I’d suggest the controls in both games are not in need of a significant overhaul. Furthermore, they don’t need to ape one another any more than they currently do. Unnecessary changes result in frustrating learning curves, can mask a lack of improvement to gameplay, and set it on the wrong path. Keep the controls consistent, and more focus can be placed on other key areas.