Monday Tip-Off: Is NBA 2K Pay-To-Win or Not? 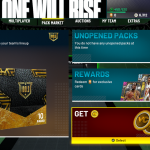 We’re at midcourt, and the ball is about to go up…it’s Monday Tip-Off! Start your week here at the NLSC with a feature that’s dedicated to opinions, commentary, and other fun stuff related to NBA Live, NBA 2K, and other basketball video games. This week, I’m tipping things off by pondering the question of whether or not NBA 2K can fairly be called pay-to-win.

Yes, discussing VC, microtransactions, and recurrent revenue mechanics in NBA 2K might seem like I’m beating a dead horse. However, it remains a persistent issue as of NBA 2K21, one that threatens the overall quality of the game. That might seem like I’m stating the obvious and preaching to the choir, but there are gamers who will still defend grindy mechanics and microtransactions. In all fairness, they admittedly aren’t mandatory, and the savvy NBA 2K gamer can find ways of enjoying the game’s most popular modes without buying VC, or even opting for the special edition.

Based on some remarks I’ve seen on basketball gaming Twitter though, I fear that we’ve grown somewhat complacent and dismissive of the problems that recurrent revenue mechanics cause. People, including prominent content creators, have declared that modes like MyTEAM and MyCAREER are no longer pay-to-win, owing to the amount of content that can be earned even if you staunchly refuse to buy VC. I do see their point of course, but I also believe that it’s missing the forest for the trees. There’s nuance and other problems that are being overlooked. First things first, though. Let’s address the question: is it fair to call NBA 2K, in its current state, pay-to-win?

I would admit, not exactly. By the common definition and usage of the term, NBA 2K isn’t pay-to-win. You can build a really good squad in MyTEAM without spending any money, thanks to challenge rewards, login bonuses, and Locker Codes. It’s quite feasible to max out your MyPLAYER’s ratings just by playing and earning VC the long way, and the all-important Badge progress can’t be bought at all; that, you have to grind. Whichever mode you play – MyTEAM or MyCAREER and its connected experiences – you need to be good on the sticks to have success. There’s a flip side to that “not exactly” though, and I’d like to explain it through a personal story.

Let me take you back to 2002, when I wasn’t an “old head” but rather a headstrong teenager in my final year of high school. I was far more interested in basketball and video games than schoolwork, and my efforts definitely reflected that attitude. In English, I was tasked to read Brave New World by Aldous Huxley, and I approached the novel with the same amount of enthusiasm as most of my other subjects. I’d barely made a dent in the book when my teacher asked me how much of it I’d read. I told her that from memory, I was still on Page 25. Noticing that I was actually on Page 26, I thought it would be very witty to announce a clarification regarding the page number.

My teacher didn’t find it witty or amusing, harshly rebuking me and pointing out that it was no joking matter that I was so far behind where I needed to be. Affronted, I set about getting through the book as quickly as I could, which is probably why to this day, I absolutely loathe Brave New World. Nevertheless, in hindsight, my teacher’s blunt response to my attempted wisecrack illustrates the childishness of splitting hairs on minutia and failing to see the big picture. That I was a page ahead of my initial guess didn’t change the fact that I’d been slack, and tried brushing it off with childish humour. That’s what I see now, of course. Back then, I thought she was a Grinch.

The parallel I’m attempting to draw here is that while NBA 2K isn’t pay-to-win in the strictest sense of the term, it’s still a Triple-A game with a freemium economy, and is designed to – at the very least – strongly encourage recurrent user spending. There’s still an advantage to be gained and shortcuts to be taken, for those willing to pay for them. Pay-to-win is only inaccurate on a pedantic technicality; a difference without much distinction, like being on Page 26 instead of 25 when I should’ve been much further ahead in the book. To smugly crack wise over the minutia is missing the point, as I did all those years ago as a disenchanted seventeen year old in Year 12 English. 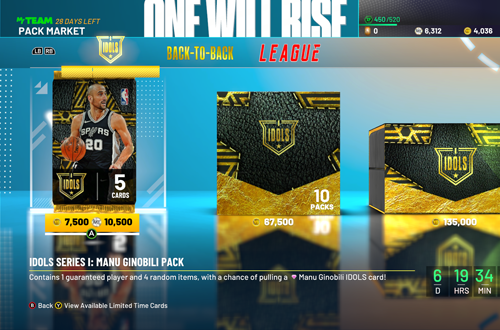 And here’s the thing: a lot of people do split hairs on the matter, and in turn, justify and defend a practice that isn’t in their best interests. Unfortunately, a lot of gamers have been conditioned to accept microtransactions as normal and acceptable; not unlike the citizens of the World State in Brave New World. Anyone advocating for the old ways has their complaints dismissed as out of touch whining by an old head, much like the outcast “savages” who live outside of the World State’s oppressive artificial existence with its conditioning, caste system, and suppression of criticism. You know what? I just may have gotten more out of Brave New World than I thought I did!

Alright, that’s enough of the literary studies. The point is that even if we agree that pay-to-win isn’t the best description of NBA 2K’s recurrent revenue mechanics, those mechanics are still in the game and problematic. OP cards in MyTEAM are meant to be desired and in demand. The best way to get them is to rip open pack after pack, or indeed, box after box. These packs cost a lot of VC or MT, and some are VC-only. MT accrues slowly, and VC can’t be earned at all in MyTEAM games. With such low odds, limited availability, and meagre payouts of both currencies, 2K’s intention is to get us to spend money in an effort to pull those elusive cards and beef up our team.

Not everyone will, of course, and those cards certainly don’t guarantee victory, but there’s still incentive to pay. It’s a similar situation with MyCAREER, particularly when it comes to the online modes. Again, it’s possible to level up a player without spending a cent, but it takes a while, and you’re at a clear disadvantage in online play if you choose to take the long road. “Pay-to-be-competitive”, or indeed, “pay-just-to-enjoy”, isn’t a whole lot better than pay-to-win, and that’s the predicament gamers find themselves in if they don’t have the tolerance to miserably grind online, or any interest in playing offline, where grinding for VC and Badge XP is admittedly much easier. 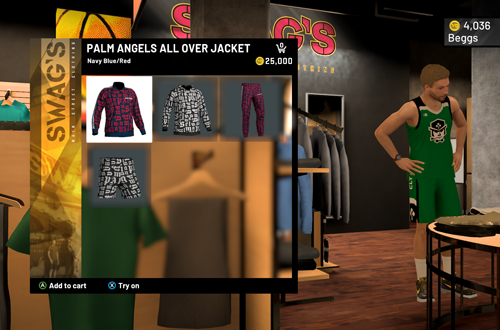 As I’ve discussed before, a lack of in-depth matchmaking options and criteria in the Pro-Am modes, and the absence of any matchmaking system in The Playground, pressures gamers to upgrade as quickly as possible. MyPLAYER clothing has also become a status symbol, and to that end, a kind of rudimentary matchmaking system among Park enthusiasts. Premium clothes obviously have premium prices, and as I’ve noted on several occasions, force gamers to budget between upgrades and cosmetic items. You need to upgrade quickly and have the right look to stand a good chance of getting games, honing your skills, and upping your MyREP so you can keep playing.

When someone says that NBA 2K isn’t pay-to-win, they’re dismissing a lot of valid criticisms and pressing issues with the game, purely on technicalities and a very rigid definition. With that in mind, maybe it’s best that we discard “pay-to-win”, and use a different term to sum up our concerns. We need a term that describes the pushiness of 2K’s microtransactions, and the way they tie into the toxic atmosphere that has come to define the series’ online scene. No, NBA 2K isn’t strictly pay-to-win because skill is still required, and that’s a good thing. However, there are still a bevy of problems that undoubtedly go hand-in-hand with 2K’s approach to its recurrent revenue mechanics.

By pedantically focusing on the accuracy of the terminology, we’re not focusing on the real problems at hand. We’re complacently succumbing to the conditioning that this is a normal part of gaming and, as Jim Sterling has discussed at length, accepting – even gratefully – a solution to a manufactured problem. Conceptually speaking, both MyCAREER and MyTEAM could function without microtransactions, or without a long grind that leaves us wishing we could speed things up. The online scene would be better for serious competitive players and more casual players alike, with in-depth matchmaking functions. Both the problems and solutions are contrived and artificial. 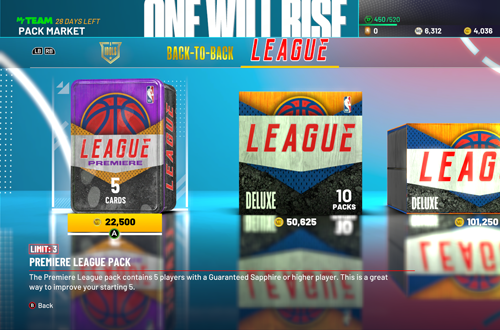 Moreover, when it comes to MyTEAM, we still have the controversial practice of loot boxes and gambling mechanics. It’s a predatory concept that takes advantage of poor impulse control in younger gamers, and anyone who suffers problems with addiction, in particular recovering gambling addicts who are substituting video games for what would normally be more costly vices. That NBA 2K’s microtransactions technically aren’t pay-to-win doesn’t change the fact that pack openings and great card pulls in MyTEAM are designed to trigger dopamine rushes and encourage spending, with no in-game warnings about odds. You don’t have to spend, but you’ll be encouraged to.

I’ll also point out once again that these decisions come from the executives rather than the people working directly on the game, so I lay the blame at the feet of the suits, not the producers and programmers. Their hands are tied when it comes to these matters, and while I can’t speak for them, I assume that as dedicated fans of basketball and gaming themselves, they’re probably not huge fans of the concept. It’s therefore vital that we aim our ire in the right direction, while constructively emphasising to the development team that we’d like to see matchmaking, a balanced grind, and other improvements. As I said though, the sad reality is that gaming belongs to the suits.

At the end of the day, it doesn’t matter that NBA 2K isn’t pay-to-win according to some rigid definition and context. What matters is that there is a freemium economy, and it prevents the game from being as deep, fair, balanced, enjoyable, and just plain good as it possibly could be. It’s ignoring pressing issues and valid complaints, and missing the big picture by focusing on a technicality. If we don’t push back and stand firm, if we get too comfortable with and forgiving of 2K’s pushy, predatory recurrent revenue mechanics, then the virtual hardwood of the looming next generation is set to be as dystopian as the brave new world that Huxley envisioned all those years ago.