Monday Tip-Off: “It’s Business” Is Not An Excuse 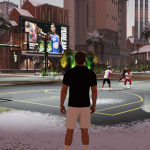 We’re at midcourt, and the ball is about to go up…it’s Monday Tip-Off! Start your week here at the NLSC with a feature that’s dedicated to opinions, commentary, and other fun stuff related to NBA Live, NBA 2K, and other basketball video games. This week, I’m tipping things off with a rebuttal to the idea that the fact developing video games is a business is somehow an excuse for lousy practices.

Video game development is a business. There is a business side to the creation of video games that, to the companies developing and publishing them, is just as crucial as the artistic side. There, I admitted it. In fact, I never denied it. If a business doesn’t turn a profit, it doesn’t keep operating for very long. If a product isn’t profitable, it’s going to have a very short shelf life. This is basic economics, so even when we’re grumbling about questionable practices regarding design and recurrent revenue mechanics, we understand that video game developers need to make money. But…

But, there are good ways and bad ways to do business, even when it comes to the often downright predatory and exploitative practice of microtransactions. The goal of turning a profit does not excuse issues with the product itself. There is nothing wrong with expecting value for money and satisfaction with your purchase, and speaking out when you feel that a product has failed to deliver in that regard. When the pursuit of profits – especially through recurrent revenue mechanics – actively interferes with the quality of a product, it’s fair to criticise developers for compromising the experience. Saying “it’s business” is no excuse for design choices that are anti-consumer.

Since everyone loves hypothetical scenarios, allow me to throw one out. Building and selling furniture is a business. When it comes to selling the furniture you’ve built, you obviously want to cover the cost of the materials and charge for the workmanship. However, if you cut corners with cheap materials and sloppy work, and overcharge for a chair or table of inferior quality, the fact that you’re running a business doesn’t excuse your providing customers with a flawed product. In fact, it’s bad business to engage in such practices, and you run the risk of losing (or going out of) business, because of the reputation you cultivate. The same goes for service-based industries. 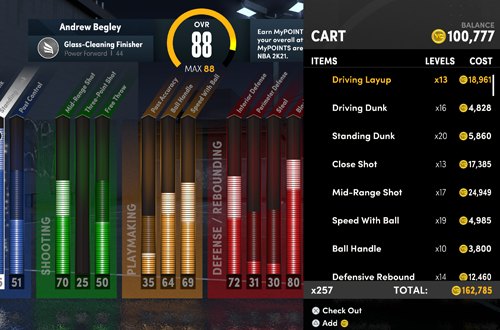 Hey, how about another scenario? Imagine that you’re an eBay seller; not just selling the odd item you don’t want anymore, but someone who has made selling on eBay into their business. Once again, your goal is to turn a profit, but there are good ways and bad ways of doing that. If you flat out lie about the item’s specifications and/or quality, overcharge for postage, or otherwise misrepresent what you’re selling in order to make a sale and maximise your profits through deception, then you’re doing some very shady business, and you deserve the negative feedback you’ll no doubt receive. “I’m running a business here” is absolutely no excuse for not being on the level.

Now that we’ve established that, let’s return to basketball gaming. Unfortunately, but not surprisingly, the “it’s business” excuse is often trotted out by shills whenever the topic of microtransactions in NBA 2K comes up. Well, that and the tried and true “everybody’s doing it”, as if that makes it acceptable. It’s worth pointing out that the profits from recurrent revenue mechanics often go into the pockets of the suits rather than the hardworking developers (or back into the game), on top of being – as I said before – all too often predatory and exploitative. Indeed, that can’t be said enough, but the fact is that microtransactions affect games, even if you don’t partake in them.

Take the grind in MyCAREER. If you’re willing and able to invest the time and effort, you needn’t pay a cent to reach 99 Overall. If you’re pressed for time and flush with disposable income, you may choose to skip the grind. On the surface, this may seem like a fair compromise, not to mention smart business for 2K. However, if the grind is preferable to skip, that’s basically admitting that it isn’t worth playing. Imagine if you went to see a film at the cinema, and you were presented with an option to pay extra just to see a quick overview of the story, the best scenes, and the ending. It wouldn’t say much for the quality of the film if there was the option to not watch most of it. 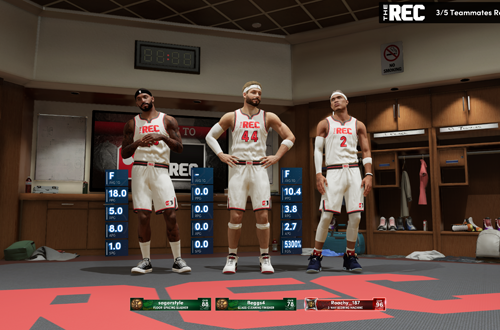 If that’s too much of an apples and oranges comparison for you, then consider any other genre of video game. Imagine if you could pay to skip to the final boss fight in a Super Mario or Zelda title, or the final quest/mission in series such as Fallout and Grand Theft Auto. It would basically be saying that all the gameplay in between is a waste of time, and not worth engaging in. It would be admitting to poor game design. Likewise, when the process of levelling up a MyPLAYER is so arduous that paying for boosts is preferable – or at least, highly tempting – it’s proof that the experience isn’t nearly as fun as it could and should be, and that that’s the case by design.

I don’t think there’d be as much of an outcry if the boost you could get from buying a stack of (frankly overpriced) VC could be earned with less grinding. As it stands, it’s a massive shortcut, which only emphasises how arduously repetitive the supposed “fun” way of upgrading your player actually is. As Chase put it in a great article over on Operation Sports:

Are we playing a game to grind to 99 in MyCareer/MyPlayer, or are we playing to get better at the game and become a useful cog on a team online and offline? If it’s both, then why lessen the grind to 99 by asking for money for VC if it’s supposed to be part of the game design? These concepts are at odds with each other and have been for years. This makes the game design weaker, and thus, the game weaker.

Of course, this isn’t the only way that the “profits above all” approach to doing business affects the quality of basketball video games. When the goal is to pressure gamers into spending money to upgrade their player or their MyTEAM squad, it only makes sense to feature little to no matchmaking. Instead of playing other gamers at your level and improving organically, you’re thrown in at the deep end in the hopes that frustration will lead to spending. Never mind that the games are supposed to be fun, and that matchmaking is a vital part of any competitive online scene to ensure the most fair and stimulating match-ups for veteran players and newcomers alike. 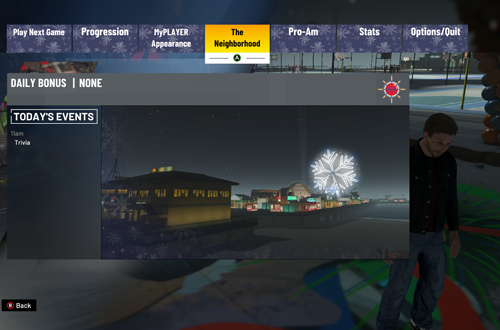 It also results in the removal of avenues to earn VC, inflation of prices while earnings remain static or are even reduced, and disinterest in fixing issues with VC earnings while being quick to patch any exploits. This is why I’ll always push back on the “it’s optional” argument, which is a frequent companion to the “it’s business” rhetoric. When the choice is between paying for in-game currency just to have a realistic chance of enjoying yourself, or enduring a grind that’s unappealing by design, it’s a dilemma that even John Morton would call a tad unfair. When the reason for not implementing a feature is “it wouldn’t be good for profits”, it’s not good for the game.

We can apply this to other beneficial ideas as well. A Legends Pool with all of the historical players in the game would be great for roster projects, but if some players are exclusive to MyTEAM, then it’s more likely that gamers will end up paying for VC to rip open packs in order to play with them. Another historical challenge mode like The Jordan Challenge or NBA’s Greatest would be fantastic, but again, it doesn’t make 2K any money; Historical and All-Time Domination in MyTEAM potentially does. From basic functionality like matchmaking to the innovative modes that NBA 2K once boasted, we’re unlikely to see ideas implemented because “it’s business”.

It’s getting to the point where I don’t think there’s anything that shills wouldn’t defend. Even if it cost 500 VC every time you fired up MyCAREER and travelled to The Neighborhood or The City, they’d find a way to justify it. “Do you travel for free? Besides, it’s only 500 VC. You can just make sure you’ve always got enough VC in your wallet to cover expenses!” There are so many aspects of MyCAREER that are unrealistic that I would argue free travel is an acceptable break from reality in a video game, but let’s entertain the second part of that rhetoric for a moment. After all, it is technically feasible to maintain a VC balance to cover payment for entering a mode. 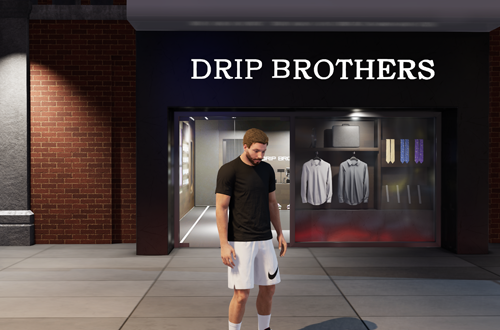 As I pointed out in my article about The City and its lack of heart, however, the issue isn’t feasibility; it’s necessity. Sure, if it cost 500 VC every time I wanted to fire up my MyCAREER save, I could budget accordingly and make sure that I’ve always got at least 500 VC so that I never have to buy it, or play a couple of Play Now games to earn it. However, I shouldn’t have to go to those lengths to continue playing a saved game in a mode that has always been free, because it’s part of the game. Now, I highly doubt 2K would ever do that. Gamers would revolt, and simply refuse to play the game (or even buy it). The point is that if they did, shills would try to justify it.

And that’s what bugs me about the shilling for companies under the guise of “it’s business” and “everyone does it”. I refuse to excuse poor design and anti-consumer practices that affect our enjoyment of the games, just because it’s being done in the name of profits, and the fact that it’s become commonplace. That says a lot about the state of the video game industry, to say nothing of the people unashamedly defending it. We can acknowledge the business side of video game development, without making excuses for issues in the games; especially those that arise due to attempting to maximise profits in ways that subsequently affect the quality of the experience.

Ultimately, the “it’s business” excuse – like all other arguments put forth by shills – is a way to shut down criticism. It moves the goalposts, deflecting from the issues at hand by taking critique out of context, and ignoring the bigger picture. I refuse to entertain that rhetoric, or consider it anything but an excuse and a bad faith argument, because that’s exactly what it is. We know that it costs money to develop games. We know that game development is a business, and that profits are vital for a studio’s survival. It’s no excuse for sloppy work or shoddy practices, though. When profits compromise quality, those of us who aren’t shills won’t sit idly by, or abide excuses.