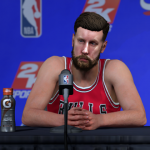 We’re at midcourt, and the ball is about to go up…it’s Monday Tip-Off! Start your week here at the NLSC with a feature that’s dedicated to opinions, commentary, and other fun stuff related to NBA Live, NBA 2K, and other basketball video games. This week, I’m tipping things off with a few thoughts on how MyCAREER should handle the amount of realism in all of its facets.

Although a shift in gaming practices may sometimes suggest otherwise, it’s fair to say that we generally want basketball video games to be as realistic as possible. Even if we’re indulging in a fantasy by putting ourselves into the NBA and simulating the life of a professional basketball player, the general aim is to mix reality and fantasy. Sure, the tales that are now told through MyCAREER may be a bit far-fetched, our abilities are greatly enhanced, and we receive a lot of attention for a raw prospect, but apart from that, the gameplay and overall experience is intended to mimic real life.

This premise has made MyCAREER an extremely popular and successful mode. As I’ve said before, it’s made a fan out of me, despite traditionally preferring the franchise experience. However, as MyCAREER has expanded and introduced new concepts, from the connected online experiences to the hub world of The Neighborhood, there have been more and more inconsistencies with the way the mode has handled realism. Some of them are quite puzzling, and difficult to justify or reconcile with other design choices. Moving forward, the MyCAREER team will need to decide how to handle realism; specifically, when to be strict, and when to take liberties.

Let’s tip things off with some gameplay talk. The first issue is one that’s become quite close to my heart: dunking. Adjustments have been made to the dunking tendencies for certain Archetypes, reducing their ability to throw down as easily as in previous games. If you’re a point guard – as I am – then you’ll find yourself performing far more layups than in NBA 2K17. If you have a Slasher Archetype then you’ll throw down more often, but even that was bugged at launch. I can appreciate the idea of reducing dunks in the name of realism, but it’s silly when your dunking rating is not only high enough to dunk more often, but also unlock fancy dunk packages. It doesn’t add up. That’s what I’m talking about when I say the realism in MyCAREER is inconsistent. In real life, we need to pay for haircuts and we obviously can’t preview them first, but they’re also not all that expensive. Also, beards don’t magically grow, as anyone who has regretted going clean-shaven can ruefully attest. Dunking tendencies are reduced for certain Archetypes, but other Archetypes are badly overpowered and unrealistic. We need to go back to our MyCOURT to change clothes, but we just happen to live on the same street as the team practice facility and our agent. “It’s realistic!” is a poor justification for certain design choices, when other elements clearly are not.

The problem is that there’s a noticeable disconnect between in-universe justifications, ease of use and programming reasons, and gameplay design. The Neighborhood is already an annoying addition – at least in my book – and it would be even worse if it were any bigger (not to mention more difficult to implement). Improving your player is a grind, and it’s ridiculous that anyone with ratings that low should become a star and the talk of the league. At the same time, building your player should be a gradual process that is sufficiently challenging. We need to budget our VC wisely, but the prices are often ridiculous when you work out the in-universe value.

In short, it’s hypocritical to justify unappealing aspects of MyCAREER with the smug reasoning of “it’s realistic, isn’t that what you wanted?”, when there are other elements of the mode that wildly unrealistic. Devising a viable solution raises a few questions, though. How do you decide which parts should be more realistic than others? Is it desirable to make everything consistent and realistic, or is it important to have a few breaks from reality? If so, how do you choose? How do The Playground and 2K Pro-Am factor into all of it? What kind of compromise will gamers accept? Will it allow MyCAREER to provide a satisfactory amount of fun, longevity, and challenge? Properly juggling the realism in MyCAREER will require trade-offs. For a start, I say raise the starting Overall to around 70, especially if the story is going to portray your MyPLAYER as a promising prospect. However, it would be tougher/ more expensive to upgrade, at least once your Overall Rating is above 85. Players over 6’3″ with good (but not great) dunking ratings should at least be able to attempt to dunk fairly often, though they would be locked out of the fancier dunk packages. Menu shortcuts could provide quick access to change clothes, buy items, or launch directly into 2K Pro-Am or The Playground, but still exist as an alternative to navigating The Neighborhood.

Even if they cost VC and can’t be changed until you play through the prologue of the MyCAREER story, you should have access to all of the hairstyles and facial hair right away, and be able to properly preview them on your MyPLAYER. If you don’t enjoy the story, you should be able to skip cutscenes. Your salary and endorsement earnings should be automatically added, as if deposited into a bank account; not delivered via an envelope you need to pick up in person. I’m not sure that we’ll ever see true parity between VC earnings and the in-universe cost of items, but the gap could at least be closed a little. Bringing back the difficulty multiplier would certainly help here.

If your MyPLAYER is meant to be someone with a legitimate shot at making it in the NBA, then key abilities for your Archetype should be boosted a little at the start. For example, any point guard with passing and dribbling ratings under 70 is unlikely to make the cut after a tryout, or be on any team’s radar. As for Badges, they should provide boosts, but they shouldn’t be overpowering, nor should they govern the ability to perform basic moves, such as tossing an easy alley-oop, or shooting free throws. A lack of balance in the Archetypes has made it too easy to select an unsuitable one, or one that doesn’t work for both MyCAREER and the connected online modes.

Furthermore, if we’re going to make the argument that haircuts should cost money and dunks should be tuned down (overall or just for particular Archetypes), then gameplay in general better be realistic across the board. Unfortunately, strategy and player AI took a step backwards in NBA 2K18’s MyCAREER. All too often, Dwyane Wade will put up fadeaway threes, and my teammates in general don’t seem to have the intelligence or awareness they did in NBA 2K17. If MyCAREER is aiming for maximum realism, then that approach should be universal. If it’s going to pick and choose, the liberties it takes shouldn’t only be ones that encourage microtransactions. Beyond all that, one of the biggest issues with realistic elements in MyCAREER is the amount of tedium and inconvenience involved. In theory, being able to decide which accessories you wear for NBA games when you’re in the locker room is a fun, immersive idea. In practice, it’s annoyingly inconvenient if you don’t want to play a game at that moment. Walking to and from the locker room is a nifty detail at first, but like traversing The Neighborhood, it gets old very quickly. In striving for realism, tedious moments don’t need to be emulated. Video game shortcuts and mechanics are used elsewhere, so there’s no reason they can’t streamline the experience here, too.

At the risk of invoking the golden mean fallacy, I would suggest that an acceptable compromise lies somewhere in the middle. Personally, I’m fine with MyCAREER taking a slightly more casual approach to its realism in terms of gameplay. In other words, feature realistic team strategies and sim-oriented gameplay, but if there are more dunks and highlights, no problem. Make the Road to 99 a journey that feels rewarding, but don’t make us crawl the early stages on our hands and knees. Don’t sell clothing and consumables too cheaply, but resolve the discrepancy with in-universe value. Repetitive and tedious moments should be cut, or at least easily skipped.

As successful as MyCAREER has been, it’s also struggled to find its identity on the current generation. It’s a mode that invites you to put yourself into the game, but then also sticks you with a back story that isn’t always going to be a good fit (see: “Livin’ Da Dream”). The story has always made you out to be a big deal, but unless you shell out some VC at the start, it’s tough for you to play like one. The aim has been to place you in an increasingly deep experience that simulates the career of an NBA player, but there are still a lot of video game mechanics. The mode is realistic, except when it isn’t, and some of the more unrealistic elements walk the line of being anti-consumer.

I’m not sure whether we’ll see any major changes to the approach to MyCAREER, especially with the financial success of NBA 2K18 in terms of sales and recurrent revenue. However, I do hope that 2K can find a better balance with the mode’s realism in NBA 2K19. It will be a juggling act in terms of making MyCAREER realistic, fun, balanced for online play, and yes, profitable. Right now, it seems as though those goals are at odds with one another, but they don’t have to be. With greater consistency in how realism is approached in every facet, and a fairer approach to the VC-based mechanics, MyCAREER should deliver an even more enjoyable experience.

Nice read! I give MyCareer a shot every year, but I never really enjoy the mode. Its just super boring. After a handfull of games Im done with it.

I’ve really enjoyed it in NBA 2K13 and NBA 2K17, but it’s felt like more of a chore this year, thanks in part to the grind, but also due to the rather unappealing story and characters this time around.