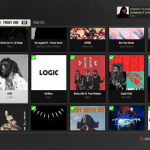 We’re at midcourt, and the ball is about to go up…it’s Monday Tip-Off! Start your week here at the NLSC with a feature that’s dedicated to opinions, commentary, and other fun stuff related to NBA Live, NBA 2K, and other basketball video games. This week, I’m tipping things off with a few thoughts on the role that music plays in the basketball gaming experience.

One of the most recent patches for NBA Live 19 added a new song featuring Jadakiss, further demonstrating that all kinds of new content can be added post-release these days. Reactions to the new song can basically be broken up into three main responses. If you dig the track, it’s cool to see and hear it in the game. If it’s not your sound, you might grumble about the lack of “real music” among the tracks. If you don’t have any strong feelings about the song, you’ll likely be largely indifferent, except perhaps for some frustration that it didn’t constitute a more significant addition or update.

For most basketball gamers, the soundtrack ultimately doesn’t make or break a title. The action on the virtual hardwood is of much greater importance; you can always mute the soundtrack and put on your own music, but you can’t always find a way to enjoy the experience when there are significant gameplay flaws, or the modes are lacking. Nevertheless, in its own way, music has been an important part of basketball gaming over the years. It’s easy to think of it as nothing but background noise, but it does subtly influence our opinions of games, and shapes our nostalgia for them. In some cases, it can even affect us beyond our view of the games themselves.

As in movies, music in video games creates atmosphere and makes the experience all the more memorable. To that end, video game music can become iconic. You’d be hard pressed to find gamers who aren’t familiar with the music from the very first level of the original Super Mario Bros, or the theme from Legend of Zelda. Speaking of Zelda, Ocarina of Time has a truly fantastic soundtrack. While the Water Temple is often ranked among gamers’ least favourite dungeons, it has a great theme that is very atmospheric, conjuring up images of running water and perfectly setting the mood. If you think of your favourite games, you’ll likely also recall the music with fondness. 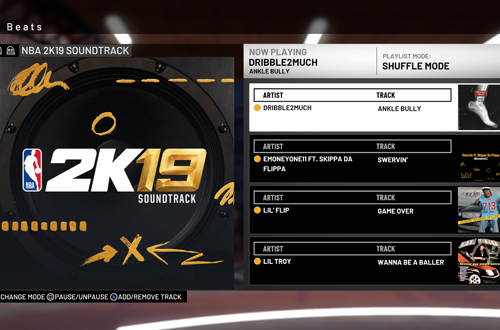 Basketball games obviously approach things a little differently. In sim-oriented titles, it’s rare to hear music during gameplay, except for ditties that you’re likely to hear in the arena during a real basketball game. If there’s a mode set on an outdoor court, you may hear the soundtrack as if it’s coming through a boom box, but otherwise, it’s just the sounds of the game. Conversely, arcade-oriented games like Jam, Street, and more recently Playgrounds, will have music accompanying the gameplay as in other genres. The best hoops games tend to have great soundtracks comprised of either original or licensed music – or in some cases, both – that enhances the atmosphere.

A catchy soundtrack can go a long way in getting us invested in a game, and pumped up to play. It’s one of the first things we’ll hear when we start the game, so music that makes us feel positive, energised, and hyped to hit the virtual hardwood or blacktop, is an essential part of the presentation. In the early days of basketball gaming, this was achieved quite well with original scores. I feel quite nostalgic for the title theme from NBA Jam Tournament Edition, particularly the way it would swell to a crescendo on a big dunk during the attract mode reel. The jazzy tunes from NBA Live 96 on PC and tracks from NBA Live 98 and NBA Live 99 also rank among my favourites.

Even after basketball video games started to license songs, soundtracks have tended to be well curated to get us in the mood for virtual hoops. In some cases, artists recorded special basketball-themed versions of the songs, such as the NBA Live 2004 mix of Chingy’s “Right Thurr”, or provided an original track as Snoop Dogg did for NBA 2K11. You only have to look at the comments on many of these songs when they’re posted on YouTube to see plenty of people reminiscing about the games they were featured in. It demonstrates how they’ve come to be associated with those games, and also our nostalgia for them. Music is very effective at taking us back in time, after all. 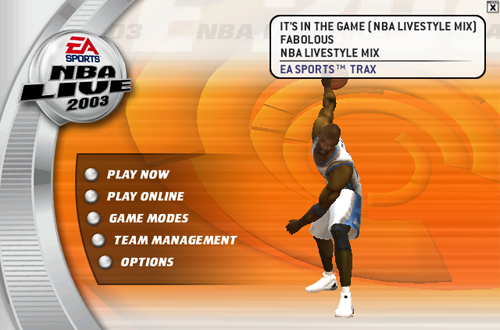 Of course, everyone has different tastes when it comes to music, and this is where we start to see some more negative opinions. Basketball games have often favoured hip-hop over other genres, as it’s become closely associated with the sport. It’s a logical approach, but not everyone is a fan. Both NBA Live and NBA 2K have experimented with their soundtracks in recent years, with EA enlisting Mick to curate soundtracks featuring more of an underground vibe, while 2K has licensed some classic rock and pop songs to sprinkle in between contemporary fare. Results have been mixed, though it’s impossible to cater for everyone’s tastes, especially older gamers.

Being one of those older gamers, I can understand where my peers are coming from, but at the same time, we’re generally not a reliable barometer for popular music. It makes sense that games are opting for songs that appeal to the younger demographic, as it’s important that they stay on top of the current trends. Besides, I’d be lying if I said I hadn’t discovered an artist or song through the soundtrack of a basketball video game. In fact, if I’m being completely honest, there are quite a few artists and songs that I’ve come to enjoy because I’ve heard them in NBA Live or NBA 2K first. As a means of discovering new music, basketball games are quite handy, and effective.

With that being said, while it’s far from a top priority, I would agree that there’s value in diversifying the genres of music featured in basketball video game soundtracks. I’ve noticed a few recent WWE 2K games have thrown a few older songs into their soundtracks, with WWE 2K18 even featuring George Thorogood’s “One Bourbon, One Scotch, One Beer“. The fact that Dwayne “The Rock” Johnson curated the soundtrack obviously has a lot to do with the selection, and we saw similar results when LeBron James was put in charge of the soundtrack for NBA 2K14. Again, it won’t cater to everyone’s tastes, but it can change things up with interesting picks. 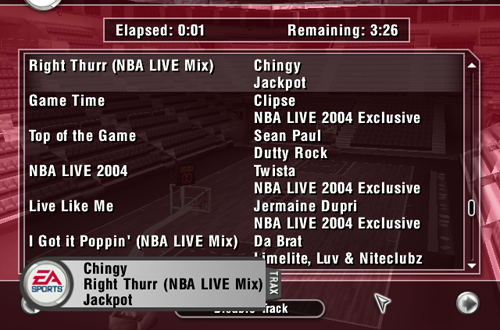 I’m not opposed to more original songs making their way back into basketball games, either. As I said, the tracks from NBA Live 96, NBA Live 98, and NBA Live 99 are quite memorable, and music like that would be a fun throwback in future games. I’d also be in favour of artists contributing new songs written especially for the games, or rewriting songs as they did for earlier titles. It would arguably be preferable to songs that have to be heavily edited in order to fit the family friendly rating. Eminem’s “Not Afraid” from NBA 2K14’s soundtrack is a great example. Compare the uncensored version to the edited version with all its gaps. It might as well be an instrumental!

While my fondest basketball gaming memories involve hooping it up on the virtual hardwood, playing GM in a franchise mode, or indeed modding games, music has been a backdrop to all of those memorable experiences. Hearing a song from an old game brings back all those memories, and I know I’m not alone in that nostalgic rush. For an old man of 34 with an eclectic taste in music, it’s also helped me fill playlists with new songs for driving, working out or working on a project, or just relaxing. There’ll always be tracks that we don’t like, but the ones that we do enjoy enrich the basketball gaming experience, even if we don’t consciously realise it at the time.

I’d have to say the best NBA soundtracks would be NBA Live 2003-2005 when half the songs were originals or remade for the game. Something as small as hearing artist shouting out “NBA Live” or “EA Sports, Its in the Game” at the beginning of songs made the game seem more special. As far as sound track from third party songs, my favorite is NBA 2K11 which had a lot of indie artists that I still look for today. I liked sports game soundtracks as a method of discovering new artists before 2K soundtracks consisted of mainstream artists (NBA 2K13 till today).

I’d love to see/hear it, but I wonder if there’s an attitude that it would be too corny. I mean, the NBA Live Mix of Chingy’s “Right Thurr” sounds kind of ridiculous compared to the original given how different they are in tone and content, but in the best possible way in my opinion. Some may find it cheesy, though. I’m definitely a fan of the soundtracks that you mentioned there.

Also, as an interesting tidbit, NBA Live 2003 was the first video game sound track to go platinum (according to businesswire)

Nifty bit of trivia there. It holds up pretty well.