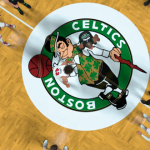 We’re at midcourt, and the ball is about to go up…it’s Monday Tip-Off! Start your week here at the NLSC with a feature that’s dedicated to opinions, commentary, and other fun stuff related to NBA Live, NBA 2K, and other basketball video games. This week, I’m tipping things off with a comparison of the Chicago Bulls’ recent game against the Boston Celtics to its virtual equivalent in my NBA 2K18 MyCAREER.

Merry Christmas and Season’s Greetings, basketball gamers! I hope you’re enjoying the holiday season with friends and family, and are looking forward to a day packed with NBA action. For those of you who are playing MyCAREER, 2K Pro-Am, or The Playground in NBA 2K18, be sure to take advantage of the double experience points on offer! If you’ve made a decent amount of progress on the Road to 99 and currently find yourself inching very slowly towards the next cap breaker, it may be a good opportunity to make some further headway. That’s assuming, of course, that you can fit it in with the rest of your holiday plans.

I’ve been playing a bit of MyCAREER myself as of late. I’m not enjoying it as much as I did last year, but it’s had its moments, and it’s the best way to grind for the Badges that are essential to succeed in 2K Pro-Am. After hearing from 2K Support that there’s nothing that can be done about my dunking problem, I’m also toying with the idea of grinding up a second MyPLAYER. For now though, I’m sticking with my original MyPLAYER, especially as the real season has caught up to my game. That gave me a fun opportunity to play the Bulls’ latest game against the Celtics, the same day that I watched the real contest on TV. Here’s how they compare.

First, a little background on my NBA 2K18 MyPLAYER and MyCAREER game so far. As I mentioned in last week’s Monday Tip-Off, with the ability to create hybrid Archetypes in NBA 2K18, I elected to create a Sharpshooting Playmaker. Beyond the issue with dunking, it hasn’t quite boosted my shooting as much as I’d have liked, and there are times when I feel I probably should’ve created a pure Playmaker. Still, I’m having some fine performances as an 89 Overall player on the Road to 99. I’m leading the league in assists with 12.6 per game, while playing for the 22-9 Chicago Bulls. As I started my MyCAREER game at launch, Dwyane Wade is also still a Bull. At 22-9, my virtual Bulls are obviously doing a lot better than the real team. Despite a recent seven game winning streak, they’re currently 10-22; one of the worst records in the league. The game against the Boston Celtics was their second loss in a row, and despite a promising first half that was quite competitive, it turned out to be a tough one to watch. Tommy Heinsohn’s commentary didn’t help matters, but the main issue was the Bulls’ play, which was uninspired throughout the second half. Outside of Bobby Portis, no one had a particularly good game for Chicago. Kyrie Irving, not surprisingly, was stellar for Boston.

Needless to say, it was a little disappointing that the only Bulls game I’m likely to see televised here in Australia turned out to be a lacklustre performance, but the team is obviously in tank mode (the recent win streak not withstanding). This is where video games can provide some solace, allowing us to create our own NBA reality where we can influence some more positive outcomes. With my MyCAREER game currently at the same point as the real season, I had an opportunity to fire up NBA 2K18, and exact some revenge on the virtual hardwood. Of course, a loss to the Celtics would result in a record of 22-10, coincidentally an exact mirror of their real record.

As fun of a coincidence as that would be, my aim was to avoid losing the game in MyCAREER. I did once intentionally lose a game during a season in NBA Live 96, and to the Celtics no less, but on this occasion, I wasn’t in the mood to replicate the real result if I could avoid it. To that end, I was eager to get out to a fast start. That didn’t happen as Boston led 9-2 after three minutes, and I missed my first three shots, all from three-point range. All the while, I had to put up with Kevin Garnett’s guest commentary. His fawning over the NBA 2K series almost made me miss Tommy Heinsohn’s biased analysis from the broadcast earlier in the day.

At the seven minute mark, the Celtics were up 15-4, and it seemed like I might be in for a long game. Although I continued to struggle with my shot through most of the quarter, a spirited run got us right back into the game, and we took a 20-19 lead with three minutes remaining. The run continued to the end of the first, and I had seven points, two rebounds, six assists, and four steals as we found ourselves up 31-27. I was surprised not to start the second quarter on the bench, but I was subbed out after picking up another assist, returning to the game with 4:33 remaining and an eight point lead. At the half, I had a double-double, and we were leading 72-56. The second half opened with some frustrating moments that are sadly typical of NBA 2K18. After stealing the ball from Kyrie Irving at midcourt, I raced up court for what should’ve been an open dunk, but instead attempted a layup that missed because Kyrie happened to be five steps behind me. Irving also hit some ridiculous threes, but Zach LaVine likewise caught fire from range, which helped me pad my assist numbers with a few drive and dish opportunities. With the lead rapidly ballooning, the Celtics called an early timeout, but they couldn’t swing the momentum. With Shammy Wells hot from the outside – as he often tends to be – we held a 116-79 lead after three quarters.

By that point, I’d racked up 21 assists, while shooting a pedestrian 6-for-14 from the field, including 3-for-8 from beyond the arc. I decided that with whatever minutes I got in the fourth, I’d aim for the assist record. As it turned out, I was on the bench to begin the final period, and didn’t get subbed in until there were four minutes left in the game. That didn’t give me nearly enough time to challenge the record, but I did tally a couple more dimes, and even got a dunk on the breakaway after stealing the ball from Shane Larkin. I finished with 17 points, 25 assists, four rebounds, and seven steals, and the team came away with a decisive 148-97 victory.

Suffice to say, despite the rocky start, the matchup in MyCAREER turned out a lot better for the Bulls than the contest I’d watched before firing up NBA 2K18. While the end result was rather unrealistic in more ways than one, that isn’t necessarily a bad thing. Even if you tend to favour as much realism as possible, the appeal of basketball video games is that even when your favourite team is struggling, you can turn their fortunes around on the virtual hardwood. There’s always a good amount of fun in doing that. It’s going to be a tough year for my beloved Bulls, but in MyCAREER at least, I’ll have a chance to guide them to another Larry O’Brien trophy.

Thanks for the recap, Andrew. I’ve been playing quite a bit of MYCAREER as well, and I teeter back and forth between fun and frustration. My archetype is a Two Way Slasher. I really enjoy playing tough defense as well as driving and dunking on people….I just didn’t realize when I created my player, he would be such a poor 3 point shooter. Dunking on people? No prob. Hitting a wide open 3? Problem. I’ve played an entire 82 game season and I think I have 2 threes total.
I’ve also thought about creating another player, a new archetype to take through MYCAREER (though I wouldn’t look forward to the grind). Is it possible to do this without deleting my original archetype? I’ve done some searching on this but have yet to find a clear answer. Any ideas?

Thanks, glad you enjoyed the article!

It’s definitely possible to create a second player. Highlight the MyCAREER option in the main menu, and press the button for “Manage Files” (there’ll be a prompt underneath the menu option). This allows you to create a new MyCAREER save. Note that there’s a maximum of 10 save slots that are shared between MyCAREER, MyLEAGUE, and MyGM. Be careful not to delete your original save!

The new save slot won’t carry over any gear you’ve purchased (nor the pre-order clothing, if you’ve got it), which is pretty shoddy on 2K’s part. However, you can create a brand new player with its own Archetype, vital stats, and so forth. It is, as you’ve surmised, quite a grind to get them to the same point though. I don’t know how people can stand to grind multiple players, though it’s something I have considered.

The swinging back and forth between frustrating and moments of fun is…well, certainly frustrating. It’s nice to know I’m not the only one who’s had a bit of a mixed experience in that regard with this year’s MyCAREER.

Ahh, of course! Thank you!! I knew it was possible, just didn’t even think to check there. Yeah, I’m a glutton for punishment…may make another player. Thanks again!

You’re welcome! Best of luck with the grind. Still mulling whether to do it myself, or indeed, try a Pure Playmaker instead of a Sharpshooting Playmaker hybrid.

Do you think a pure playmaker would end up being a better 3 point shooter than a sharpshooter? For my second build, I’d like to go a different route than my first build, so I’d like someone who can hit jumpers and threes. And I would assume that the term “sharpshooter” implies a good 3 point shooter. But in your experience, that’s not necessarily the case?

A Pure Sharpshooter (or Primary Archetype) probably would make more of a difference, but there’s a very minimal advantage when it’s the secondary Archetype to Playmaker. The problem with the Sharpshooting Playmaker hybrid is that it doesn’t have any Hall of Fame level Badges, and no Gold level shooting badges. Combine that with the fact its dunking tendencies are too low, and it’s not as effective as it should be.

I’m guessing having Shot Creator or Sharpshooter helps more than it hurts in terms of shooting, but I reckon I shot better with my Playmaker in NBA 2K17. Of course, the shooting mechanics this year have a lot to do with that, especially since All-White/Good releases are basically nerfed Green/Perfect releases.