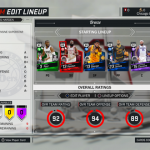 We’re at midcourt, and the ball is about to go up…it’s Monday Tip-Off! Start your week here at the NLSC with a feature that’s dedicated to opinions, commentary, and other fun stuff related to NBA Live, NBA 2K, and other basketball video games. This week, I’m tipping things off with a video comparing the value of MyTEAM packs to real packs of basketball trading cards.

The odds and overall value of the packs in MyTEAM have been discussed at length since the mode debuted in the NBA 2K series. As someone who used to collect basketball trading cards, I’ve often wondered how MyTEAM’s virtual packs stack up against the real thing. Are the pack odds as unfairly weighted as they sometimes seem to be? How would a box of packs in NBA 2K17’s MyTEAM, featuring a total of twenty player cards, compare to a couple of real packs of basketball trading cards, which generally include ten to twelve cards apiece?

I decided to put those questions to the test. A while back, I bought a box of League packs in MyTEAM, and spent a few minutes opening them all. I also picked up a couple of brand new packs of Panini NBA Hoops trading cards off eBay, and opened them up as well. The results were certainly interesting, and since I’ve been sitting on the footage for a while now, I’m pleased to finally present to you my comparison of MyTEAM Packs vs. Real Card Packs!

Check it out here on our YouTube channel if you can’t see the embedded video. Are you surprised by the results? What have your experiences been like when it comes to buying packs in MyTEAM? Let me know in the comments section below, and feel free to take the discussion to the NLSC Forum! With NBA Live 18 and NBA 2K18 coming out this week, I’ll be looking to do some more video features, hopefully on a more regular basis. Stay tuned, and be sure to subscribe to us on YouTube! In case you missed it, I also posted a video last week featuring some of NLSC THRILLHO’s best moments in NBA 2K17’s 2K Pro-Am. Catch it here if you haven’t seen it yet.