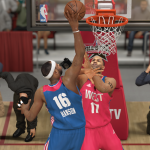 We’re at midcourt, and the ball is about to go up…it’s Monday Tip-Off! Join me as I begin the week here at the NLSC with my opinions and commentary on basketball gaming topics, as well as tales of the fun I’ve been having on the virtual hardwood. This week, I’m tipping things off with a breakdown of the nicknames that I’ve given to generated players in my NBA 2K14 MyCAREER.

As I’ve previously discussed, I greatly enjoy generated rookies in franchise and career modes. Obviously it’s vital that we have the option of inserting real Draft Classes into our game if we so choose, but fictional prospects have always been more appealing to me. That may sound strange given that I prefer to play with real rosters, but I enjoy how generated rookies encourage us to use our imagination as a fictional NBA takes shape. Even if I could use custom Draft Classes with real prospects in NBA 2K14 MyCAREER, I’d have to pass on that, as it would mean no Terry Hanson!

Although Terry Hanson is my favourite generated player – naturally, since he’s my teammate on the Philadelphia 76ers – there are some other fictional players who are adding personality to the league. Some of them are already shaping up to be star players, which makes the matchups fresh and interesting five years in. There are also some fun name combinations, and unique generated appearances. This has led me to give nicknames to some of those fictional players in my NBA 2K14 MyCAREER as I’ve encountered them in gameplay, or in the roster listings. It’s a fun exercise that’s added to the immersion, and set some of them up to be Virtual Hardwood Legends. 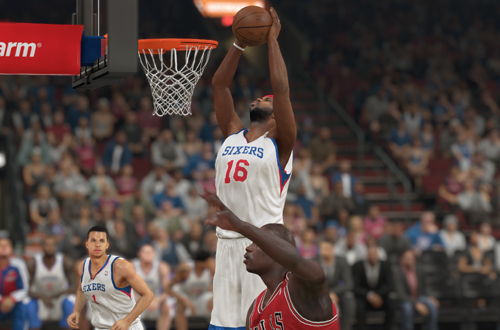 Let’s start out with a generated player who’s already a Virtual Hardwood Legend: Terry Hanson. With the way he can do it all on offense – knock down jumpers, beat defenders with quick spin moves, and dunk all over them – he’s a terrifying player to guard. There are similar adjectives I could use of course, but they’re not puns on his first name! Also, considering he struggled in his first few games, one can imagine reporters dubbing him “Terrible” Hanson, just as Magic Johnson was once called “Tragic” following a disappointing season. Terry Hanson may not be Magic, but he quickly went from “Terrible” to “Terrifying”. I can’t wait to get him back on the court! 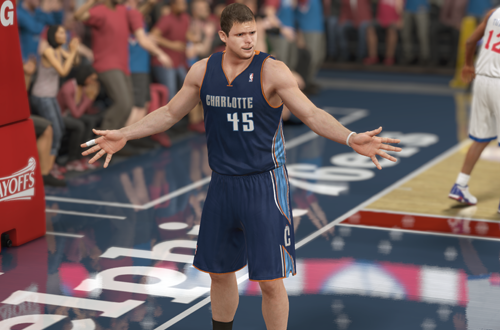 The fact that this Puerto Rican big man is named Ramon Ramos means he already has a memorable moniker. It was impossible not to continue that alliteration and give him the nickname “Razor”; an obvious tribute to the late professional wrestler Scott Hall, and his famous gimmick of Razor Ramon. Now, the character of Razor Ramon was Cuban-American rather than Puerto Rican, and Scott Hall himself was neither, as he was born in Maryland. However, the enduring popularity of the gimmick and the way that “Razor” seamlessly fits with Ramon Ramos makes it a viable nickname. It’s also far better than Double R, R-Squared, or something incredibly uncreative like RR45. 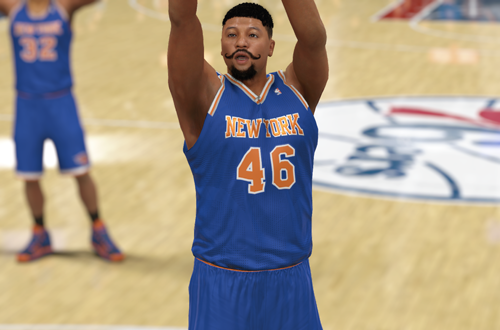 I expect that screenshot probably explains this nickname’s origin quite succinctly, but in case it’s not obvious, it’s all down to Gabriel Carson’s facial hair. As soon as I saw that wild moustache, I immediately pictured an old timey circus ringmaster barking “Step right up!” If we want to give him some more back story – and I absolutely do – I imagine that he grew out and styled his facial hair thusly as a joke, or perhaps for a Halloween party. Gabriel – who before then was very simply nicknamed “Gabe” – took a liking to the old school ‘stache. This led to his friends and fellow students at Kansas State to start calling him “The Ringmaster”, and both it and the style stuck. 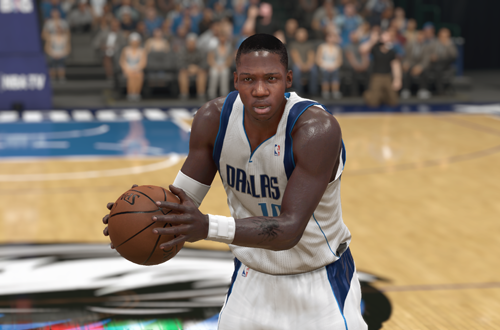 Well, you can tell by the way I picked that name, I know music, man. And yes, while even video game characters are likely aware that Disco Sucks – apart from Leisure Suit Larry, of course – the Bee Gees are still musical icons, thanks in no small part to their signature song, “Stayin’ Alive“. Brothers Barry, Robin, and Maurice Gibb made up the Bee Gees, though the story that the band’s name stems from “Brothers Gibb” is actually a musical urban myth. Nevertheless, Gibbs is close enough for jazz (or disco for that matter), and his initials of BG seal his musically-inspired nickname. Let’s also say that like Gabriel Carson, Bob Gibbs went through a retro fashion phase in college. 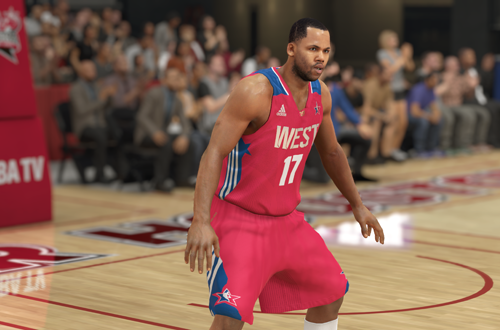 From music to military, we have Bob Gibbs’ star teammate, Kurt Sherman. This is admittedly one of the less original nicknames I’m assigning to generated players in my NBA 2K14 MyCAREER, as a handful of players have been nicknamed “General” (or some variation thereof). Still, it’s fitting, as is his alternate nickname of “The Tank”. Both monikers play off his surname, as in General William T. Sherman, and the M4 Sherman tank that was named after him. Appropriately, Kurt is a burly 6’9″, 228 lbs small forward who’s unstoppable in the lane. Nicknames like this are often recycled, and the way Kurt is shaping up, he may become the most famous NBA “General”. 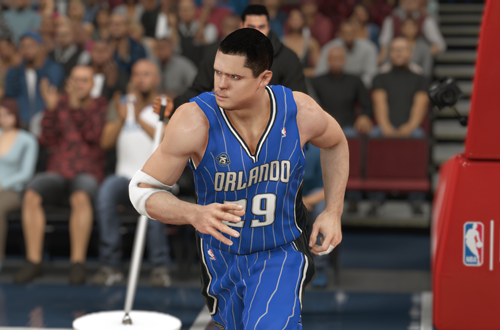 This one’s a tribute to Kenny’s NBA Live 10 Dynasty story, “The Next Level“. One of the stars of that franchise game was Borislav Perko, a fellow generated rookie. Even though that was Borislav’s full surname, Perko also works as a shortened version of Perkinson; especially here in Australia, where we love to slap an -o on the end to create nicknames. The Original Perko – the OP if you will – became a superstar for the Denver Nuggets, leading them to championships. Jimmy has a lot to live up to there, but the 7’1” centre from Charles Barkley’s alma mater is a solid player in his own right, providing the Magic with scoring, rebounding, passing, and shot blocking. 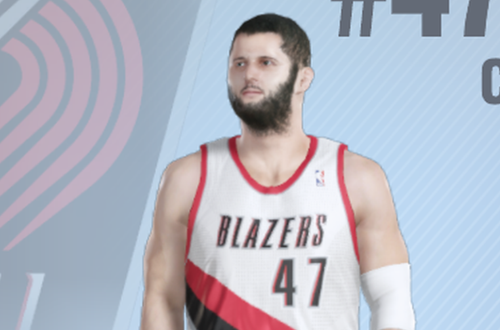 Some nicknames are cool and creative. Other nicknames are just kind of silly names we get stuck with, and I wanted to reflect that with some of the players in my NBA 2K14 MyCAREER. When I saw 2017 second round pick Marion Whitney warming the bench for the Portland Trail Blazers, John Wayne sprang immediately to mind. That’s because the man they called The Duke – a respectably cool nickname – was born Marion Morrison. Whitney also attended Cal; admittedly a fair distance from Tinsel Town, but still in the state where John Wayne became a Hollywood Legend. Whitney’s hoops career likely won’t make him a Virtual Hardwood Legend, though. 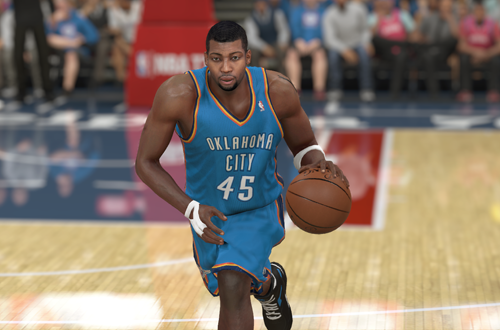 Surprise, surprise, the person who was keen to be part of a 2K Pro-Am squad named NLSC THRILLHO is big on references to The Simpsons! “Be Sharp” (or possibly “B-Sharp”) is definitely inspired by Homer’s barbershop quartet, but it’s a good mantra for a point guard, too. Brook is definitely sharp when it comes to his passing and ballhandling, though he’s certainly no sharpshooter from range. A second round pick in 2014, it doesn’t look like he’ll develop into a star, and tellingly the Thunder signed Isaiah Thomas when Russell Westbrook took his talents to South Beach. You don’t need to be a star to have a nickname though, and I can’t go past a Simpsons reference! 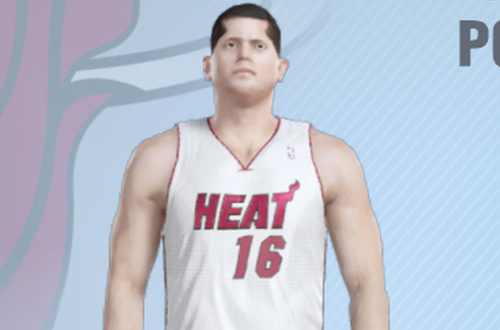 Speaking of The Simpsons, producers Al Jean and Mike Reiss left the show after Season 4 to create their own series, The Critic. When Fox picked up the show for its second season, it led to an infamous crossover with The Simpsons, wherein its star Jay Sherman is a judge at Springfield’s film festival. As a fan of both shows, that’s all I need to dub Jermaine Sherman “The Critic”! Since Kurt Sherman is the better player, he gets the cooler Sherman-based nicknames. Jermaine is a savvy player with a good basketball mind, though; the kind of role player who could go on to be a good analyst. That’s not quite the same thing as a critic, but this J. Sherman still knows what stinks. 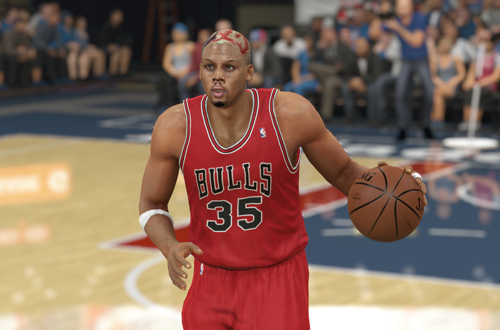 I’m guessing this is another nickname that’s quite obvious from the screenshot! Not only does Dorell Wilkins sport Dennis Rodman’s hairstyle, but he bears more than a passing resemblance to The Worm. Although he’s too young to actually remember Rodman’s career, a young Dorell became a fan thanks to his older brother, and tried to imitate his game. He’s a bit fonder of scoring than Dennis was, and he doesn’t have Rodzilla’s mastery of the boards at the pro level, but he still pays tribute to his idol with his style. If I could take Terry Hanson with me, I’d force a trade to Chicago just so that I could play alongside “Worm Junior”, and turn him into a solid role player. 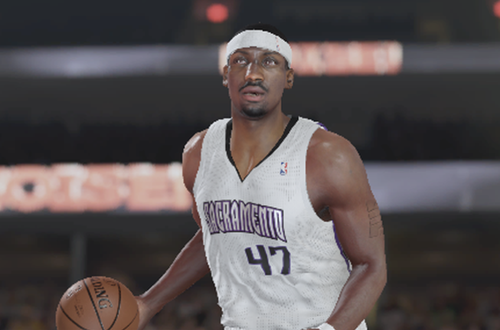 Yes, it’s another musically-themed nickname! “Bad, Bad Leroy Brown” was, as Jim Croce reliably informs us, meaner than a junkyard dog. To that end, “Junkyard Dog” would’ve been a fine nickname for Leroy Carter as well, but Jerome Williams claimed that moniker years earlier. I see this as a nickname that Carter will grow out of when a catchier one comes along, not unlike Michael going from “Mr. Jordan” to “Air”. It may be part of his rivalry with “General” Sherman, picked first overall in 2016 while Carter was taken fourth by the Kings. Still, with a rock-solid jumper and athleticism that helps him rack up buckets at the rim in style, Leroy Carter is a bad, bad man. 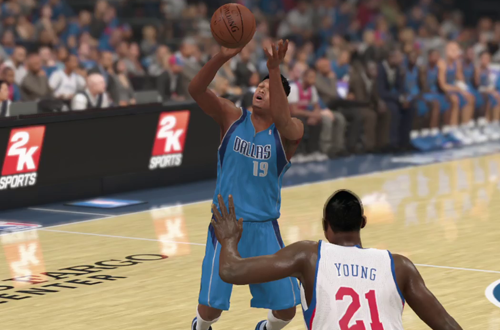 I say this knowing full well how old it makes me sound, but I really appreciate young players who have a healthy respect for NBA and basketball history. Such a player was generated in my NBA 2K14 MyCAREER, namely Herb Conner. I’m ascribing that characteristic to him, along with the nickname “The Throwback”, because he has Dick Barnett’s distinctive shooting form. “Herb” is also a rather outdated name for anyone born circa 1996, and Conner’s percentage from downtown is reminiscent of a streaky shooter from the early days of the three-point line. He’s a solid and promising point guard though, and “The Throwback” and “The General” may become a dynamic duo.

And there you have it: a twelve-man roster of generated players in my NBA 2K14 MyCAREER game, along with their respective nicknames. Obviously, these aren’t official in terms of in-game content, and there’s no way to add them to a PS4 save file. Devising these nicknames adds character to those fictional players however, and I’ll be using them in my story topic. Once again, this kind of imagination draws you even deeper into the fictional NBA that’s being created on the virtual hardwood, making it more immersive and enjoyable. Whether you’re playing NBA 2K14 MyCAREER or another mode with generated players, I recommend coming up with some nicknames!