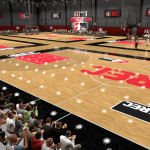 We’re at midcourt, and the ball is about to go up…it’s Monday Tip-Off! Start your week here at the NLSC with a feature that’s dedicated to opinions, commentary, and other fun stuff related to NBA Live, NBA 2K, and other basketball video games. This week, I’m tipping things off with some thoughts on the online experience I’d love to see in NBA 2K, but we’re highly unlikely to ever have.

Aside from some admittedly fun sessions of 3v3 Pro-Am and jumping into The Rec after spinning double MyREP on the Prize Wheel, I’ve not been playing online in NBA 2K20. I’d been dabbling with a session or two in The Rec every so often, but in order to finally let MyCAREER go, I’ve focused on finishing my rookie season and generally avoided taking part in any of the connected experiences. Thanks to so many hit-or-miss sessions, I no longer have the same enthusiasm for the online experience that I once did. It’s made it much easier to abstain from those modes.

Even the satisfying runs in 3v3 Pro-Am had their annoyances. Despite playing well and even winning eight games in a single session, I somehow dropped from 99.9 to 99.4 Overall, spotlighting some of the major flaws with the MyREP and Overall Rating systems in NBA 2K20. Of course, the tendency to punish rather than reward is just one of the problems with the online experience in NBA 2K. It’s unfortunate, as online play in NBA 2K should be so much better than it is. From issues with lag and matchmaking to meta-gaming and what it takes to get there, I can’t help thinking about the online experience that NBA 2K should offer, but we’re unlikely to see.

Let me paint you a picture: 2K Pro-Am as the home version of the NBA 2K League. I know, it’s already supposed to be just that, but I mean a proper home version of 2K’s joint eSports venture with the NBA. I’m talking a selection of player builds that have been distilled down to the most balanced archetypes, with a standard set of Badges and animations. I’m talking equal ratings so that it’s all about our skill on the sticks, not finding the cheesiest animations and most OP builds. No painful grinding, no suffering through a terrible online experience with a low-rated player. It’s all about how well we play and being able to work as a team, if we’re to win games. 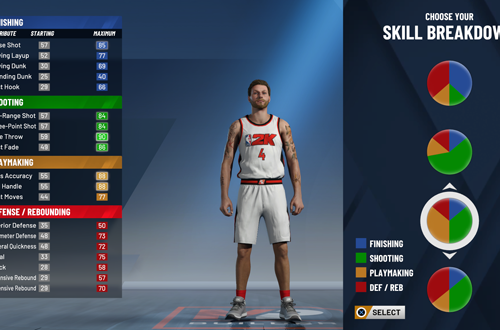 Granted, this does defeat the purpose of building up a player, which has obviously become a big part of the offline and online experience. With that in mind, let’s see if we can work out a compromise. What if the build we choose for offline play gave us a choice between a few balanced online builds? For example, if I created a Playmaking Shot Creator point guard as I did in NBA 2K20, I’d be able to pick from three to five balanced online builds related to that skill set. Those builds would have standardised ratings and Badges, so there’s no chance of being underpowered or overpowered. I’d be able to swap online builds if I liked, but only to one of the other compatible builds.

As for the ratings, rather than being identical to my offline player, they’d scale with it accordingly. That would allow online play to be viable even when I’m still levelling up my player offline. We’d all start out with a player that’s 75 Overall, with a handful of Bronze Badges and suitable athletic ratings. As we raise our Overall rating, we’d be able to level up to a better online avatar that’s a bit more powerful than our offline player. Topping 95 Overall would unlock the best possible avatar, but it would take some time and effort. These different levels of online-only builds could be given gem levels equivalent to MyTEAM cards, which would establish rankings and skill level.

That would be important because in this online experience that I’m envisioning, we have full, proper matchmaking. Not only are your win-loss record, Teammate Grade, MyREP, and ratings/gem level taken into account, but your history in previous NBA 2K games also comes into play. That means if you’re a seasoned online player, you’re going to be matched up with teammates and opponents who are similarly experienced. Teams in The Rec would be put together according to skill level, experience, Grade, and fit. You’d be on squads that complement your style and skill, and you’d be facing opponents that, on paper at least, are on your level and will provide a fair challenge. 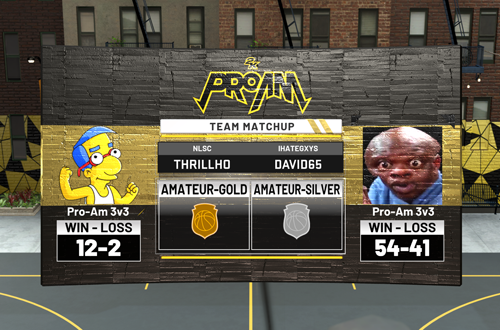 And since we’re expanding and improving matchmaking, there’ll be multiple options in team Pro-Am. If you don’t want to play games involving AI players, you don’t have to. Assuming the matchmaking system doesn’t just match full teams against full teams and partial teams against partial teams, you’ll be provided with the option. This way, people who want a more authentic home version of the NBA 2K League for their online experience will get it, and those who want to compete but play more casually, or otherwise don’t mind AI players joining in if it means actually getting a game and not dealing with toxic randoms, are likewise catered to. In short, no gatekeeping!

With balanced builds and proper matchmaking taken care of, let’s talk about servers. Now, it’s impossible to guarantee that there’ll never be any problems, and the quality of one’s Internet connection will always be a factor. However, in this enhanced online experience, disconnections will be a rarity in all regions. If you’re left waiting for the connection to be restored, it’ll be a rare blip, or it genuinely will be a problem with your connection to the server. Lag spikes and general sluggishness will generally be an anomaly though, assuming there are no problems with your connection and setup. From game balancing to server stability, it’ll be a wonderful online experience.

Sounds great, right? No arduous grinding just to have a player that’s halfway viable, no ridiculous meta-gaming with broken and OP builds, no frustrations as your fast connection doesn’t save you from lag spikes and disconnections. Toss in a proper matchmaking system that cuts down on toxicity, and a properly organised MyREP and rewards system to boot, and we’re in for a fun time in NBA 2K’s online arena! It’s just too bad we’ll never have this kind of online experience in the game. Oh, we might see some token improvements, but we’ll never have anything this good in NBA 2K online. I’d love to be wrong about that, but I just can’t see how it’s feasible. 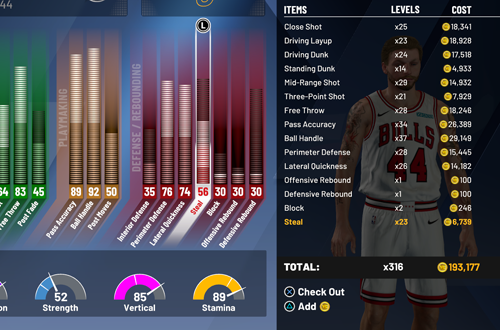 If we don’t have to grind, we’re not boosting those engagement numbers that 2K loves to tout. If we don’t need tons of VC, then we’re probably not going to buy the special editions or VC bundles, meaning less revenue. The game will still make bank, of course, but not quite as much as it could. Beginning with an underpowered player every year puts pressure on gamers to upgrade quickly, and that means grinding or spending, which in turn means good numbers to present to the shareholders. The unfortunate truth is that most things that would make the online experience more accessible, less toxic, and simply better, tend to be bad from a business perspective.

Or at least, it is with the business model 2K has adopted. I imagine that the popularity of an enhanced online experience would result in plenty of sales and engagement, and continued success year after year. There’d be some hours trimmed off if there were less grinding though, lower revenue with less recurrent user spending. Also, if the money that NBA 2K made was put back into the game – say, by investing in the infrastructure and improving server stability – that’d be less money going into the pockets of executives. Not the developers putting in the hard work; the executives who sit back and instruct them to ramp up the recurrent revenue mechanics.

And so, we won’t get anything like the online experience we could and should be getting out of NBA 2K. There may be members of the development team who think these suggestions have merit, but it doesn’t matter. If it doesn’t fit the business model, it’s a very hard sell. You would think that making a great product would be part of a successful business model and an effective way of making money, but sadly it doesn’t squeeze every last cent out of the userbase, so that’s insufficient. Of course, if EA can ever step up their game with NBA Live, or the userbase collectively gets fed up and decides to boycott VC sales or NBA 2K entirely en masse, those profits will drop. 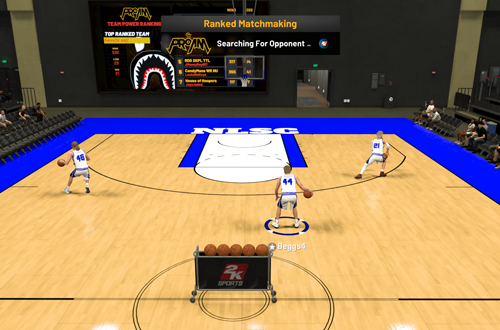 The irony is that the executives pushing for microtransactions and big engagement numbers will likely decide that pushing even harder is the answer to boosting revenue again. It won’t occur to them that people are rebelling against the practice because it’s ruining the game and they don’t want to play it. No, it must be because the game isn’t trying hard enough to encourage recurrent user spending, hours of grinding, and sales of the special edition! It’s why we’re seeing MyTEAM offers pop up in MyCAREER in NBA 2K20. For all the other records the game is setting, user spending is down this year. Again, the game is still making bank, but it’s never enough for the suits.

Their ideas for pleasing shareholders and lining their own pockets are bad news for the online experience in NBA 2K, and indeed, the on-court experience in general. 2K is capable of implementing the features I discussed. There are very talented and clever people working on NBA 2K who love basketball and care about the game. Obviously I can’t speak for them, but I highly doubt they delight in server struggles. I’m sure they would love to give us proper matchmaking and the best offline and online experience they possibly can. There are calls they can’t make though, and those calls stand in the way of a better online experience, because that stands in the way of profit.

Well, even more profit, anyway. It’s disheartening to think about, because it means the situation isn’t going to get any better. I hate to be so cynical, but looking at the game these past few years, there are numerous legacy issues with the online experience. The suggestions I’ve outlined above are potential solutions, but they’re also incompatible with an approach that is increasingly aggressive in pushing microtransactions and padding engagement stats. That’s the focus, and so that’s the only thing that’s changed in the past few years. All the things that the online experience in NBA 2K needs, the things it should have, are sacrificed because the suits might get smaller bonuses. 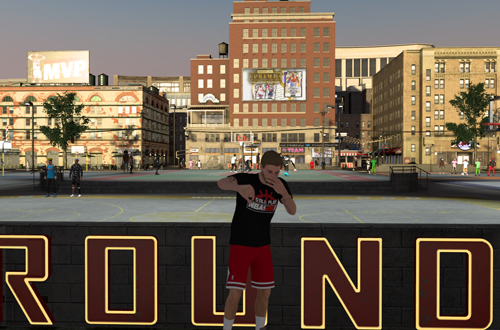 Instead, NBA 2K lags – pun fully intended – behind a game like Rocket League, with its fun, skill-based gameplay, and robust online scene. It’s even revamped its loot box system (sort of), and its eSports league is popular and successful. Psyonix has taken heat for the game’s loot boxes and premium content, but they’ve also been lauded for adding new content and game modes free of charge. Conversely, 2K has squandered goodwill and let the quality of its product suffer in the name of a myopic push for bigger profits in the short term. Time will tell if the bubble bursts, but one thing’s for sure: we’re not getting that awesome online experience that the game is capable of.