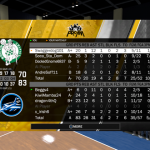 We’re at midcourt, and the ball is about to go up…it’s Monday Tip-Off! Start your week here at the NLSC with a feature that’s dedicated to opinions, commentary, and other fun stuff related to NBA Live, NBA 2K, and other basketball video games. This week, I’m tipping things off with a video of a recent overtime victory for our official 2K Pro-Am squad in NBA 2K18, NLSC GrindTime.

As Arcane and I discussed in Episode #235 of the NLSC Podcast, last Friday we made an unlikely return to 2K Pro-Am in NBA 2K18. After some rough sessions and generally feeling disenfranchised with the game, everyone on the squad decided that it would be best to take a break. However, we felt like giving it another try last week, and subsequently, “just one game” became three. We were victorious in the latter two games, with the second win coming in overtime following a clutch three-pointer by The X. It was definitely one of the more satisfying games NLSC GrindTime has had.

Since I saved the footage of the final few seconds of regulation, as well as the entire overtime period, I thought I’d share it with everyone to tip off a new week of gaming here at the NLSC. Watch it below, or check it out here on our YouTube channel.

Moving forward, NLSC GrindTime might have a run every now and again. As I’ve previously discussed, it’s a wise idea to take a break from a game if it’s becoming more frustrating than fun. It may not be something we do every week, as was the case with NLSC THRILLHO in NBA 2K17, but as long as we can have some competitive games and wins like this one, we’ll hit up 2K Pro-Am from time to time. I’ll be sure to share any noteworthy highlights, as well as put together some other video content throughout 2018, so please subscribe to our channel, and stay tuned for more features.