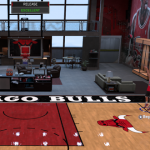 We’re at midcourt, and the ball is about to go up…it’s Monday Tip-Off! Start your week here at the NLSC with a feature that’s dedicated to opinions, commentary, and other fun stuff related to NBA Live, NBA 2K, and other basketball video games. This week, I’m tipping things off with some reflections on my experiences trying to find a reliable jumpshot for my MyPLAYER in NBA 2K18’s MyCAREER and 2K Pro-Am.

When The Prelude was released in September last year, I agonised a little over the MyPLAYER Archetype I wanted to run with. Although I was tempted to run with a Pure Playmaker, I decided that I’d give Sharpshooting Playmaker a try. It seemed like a solid choice, especially as we wanted to make sure that we had at least a couple of viable threats from the outside on the NLSC’s 2K Pro-Am squad. Given that I like to rack up assists and run the offense, retaining the key skills and Badges of a Playmaker also seemed like a wise idea.

The results have been mixed. The Sharpshooting Playmaker Archetype doesn’t have a Hall of Fame level Badge, which locks me out of attaining one of the Trophies. As I’ve previously discussed, due to what seems to be an issue with my player’s dunking tendencies, I can very rarely throw down, even though I’ve upgraded my rating to be able to unlock a few fancy dunk packages. My biggest issue, however, is that I’m yet to find a jumpshot animation that I’m comfortable with. I’ve tried several jumpshots, from real players’ signature animations to custom jumpshots of various combinations. Unfortunately, none of them have been as reliable as I’d like.

That’s not to say that I haven’t had any success with my jumpshot. I’ve created a few animations that seemed to be effective for a game or two, but ultimately, they haven’t stuck. Sometimes, I get the feeling I need to change my jumpshot before every game, as each animation feels good the first time I use it. It’s been difficult to find one that’s good for both online and offline gameplay, with a cue that works for me. As such, I’m still looking for an animation that will allow me to knock down threes a little more consistently in MyCAREER, and a lot more often in 2K Pro-Am. To that end, here are some of the custom animations I’ve dabbled with, using the Jumpshot Creator.

Klay 49 (Klay Thompson’s Jumpshot with a Custom Base) A textbook form with a relatively quick release, Klay Thompson’s jumpshot seemed like a good candidate as far as its visual cue. Here I’ve combined it with Base 49, as various videos discussing the best jumpshots this year have indicated that it has a bigger window for Green releases. This jumpshot felt good and served me well for a while, both in MyCAREER and in 2K Pro-Am, but felt less effective the more I used it. When it seemed as though I couldn’t knock down threes anymore, I looked to try out another jumpshot. The fictional Shammy Wells doesn’t have a signature form that you can select, but thanks to some research by a member of the Forum, we know the combination to use in the Jumpshot Creator. He uses Base 49, along with Release 27, and the quickest release speed. In my experience, the CPU puts his form to great use, knocking down three after three and padding my assist numbers in the process. I’ve had a little success with it, but as with Klay 49, I seemed to lose my touch with it after a few games. With its quick release, it can be a tough one to use online, thanks to the input lag. Sticking with Base 49 under the impression it would help me to hit Greens as often as possible, I decided to combine the forms of two of the game’s greatest shooters, past and present. The result is Curried Bird, a 50-50 blend of Stephen Curry and Larry Bird’s releases. At first, it seemed like a fairly easy visual cue, and I did find myself getting some more Green releases with it. Unfortunately, it’s turned out to be another shot that’s let me down in the long run. It’s been one of the more reliable jumpshots I’ve tried, but still not as consistent as I would like, especially in 2K Pro-Am. At Valor’s recommendation, I tried switching to James Harden’s Base. It’s definitely been effective for him as a midrange shooter, and he’s started to knock down more three-pointers in 2K Pro-Am as well. I decided to keep a blend of Stephen Curry and Larry Bird for the release, this time opting for a 55-45 split in favour of Curry. I feel like I’m edging closer and closer to a reliable jumpshot with this one, as I’ve had some good games from three-point range with it, in MyCAREER and 2K Pro-Am. It’s not quite there yet however, resulting in some subpar performances for NLSC GrindTime.

At this point, I’m wondering whether it’s simply better to choose a real signature form rather than creating a custom jumpshot. With some VC to spend, I bought Stephen Curry’s animation in the MyPLAYER Lab, and have been getting used to it, shooting around on MyCOURT. I’ve yet to try it out in a game, offline or online, but it does seem to be quite effective from the corner, where I’m also helped out by the Corner Specialist Badge. I’m interested to find out if there really is any advantage to using a custom jumpshot, or whether mastering a pre-made animation is just as effective, if not more so.

In the meantime, I’m also interested in recommendations. MyCAREER, Playground, and 2K Pro-Am gamers, which jumpshot are you using at the moment? Do you have any custom combinations to recommend? By all means, post them in the comments section below, and I’ll be sure to try them out. If I can’t dunk as often as I could in NBA 2K17, then I at least want to be deadlier from downtown than I was for NLSC THRILLHO last year. Until then, my quest for a reliable jumpshot continues.

When it comes to jumpshots, I generally think the best strategy is to choose either historical players, or players that aren’t among the most popular in the current game. If everyone chooses Curry or Klay – and 2K realises that the shot is OP – they’re probably more likely to nerf it.

I think that’s why my Lazza Bazza/Dirk hybrid remained relatively consistent (give or take a a few stretches of games) throughout NBA 2K17. I even had someone in the park direct message me on the PSN asking what my jumpshot was… I remember thinking “nah, that’s the first step to getting it nerfed.”

Good point. It wouldn’t surprise me if there have been some tweaks to a few of the bases after some OP combinations have been discovered and talked about.

Stephen Curry’s form (purchased, not created) worked out OK in the game I played last night, though that was MyCAREER, so not sure how it goes with the input lag of online yet. I also got a good suggestion on Twitter, so I’ll have to see how that goes.