Monday Tip-Off: Ready (To Not Be) Player One 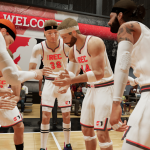 We’re at midcourt, and the ball is about to go up…it’s Monday Tip-Off! Start your week here at the NLSC with a feature that’s dedicated to opinions, commentary, and other fun stuff related to NBA Live, NBA 2K, and other basketball video games. This week, I’m tipping things off with some more thoughts on the online scene in NBA 2K. Specifically, in order to improve the quality of play, gamers must be ready to not be Player One.

I’m fortunate in that I’m not completely reliant on the online scene to enjoy basketball video games. I grew up gaming in a time before online play was common – or for that matter, possible – on the virtual hardwood. Dynasty was my mode of choice in NBA Live, and I’ve also racked up many hours playing single player MyCAREER in NBA 2K. I’m therefore able to enjoy the offline experience, which is vital given that the online scene in NBA 2K has a myriad of problems, ranging from technical issues and design flaws to toxic attitudes and a sloppy style of play.

At the same time, while I find it easy to eschew the online scene, I would prefer it to be better than it is. Obviously I’d like to jump in on occasion, having developed an appreciation for it over the past generation. Even if I’m not partaking in it myself, I’d still like to see the scene thrive and be the best possible experience for those who are playing it; especially gamers who play exclusively online. I’ve previously discussed vital changes that the developers need to implement, such as proper matchmaking. Today however, I want to focus on the problem of how so many gamers aren’t ready to drop their Player One mentality online, and how that could possibly be remedied.

I’m sure that most people will immediately understand why I’m saying when I refer to a “Player One mentality”, but I’ll define it for the sake of clarity. I’m referring to the attitude of treating online multiplayer like a single player experience, and in turn, your teammates like CPU drones. Chemistry mechanics aside, CPU teammates won’t be bothered if you hog the ball and chase your own stats, whereas human teammates are likely going to be miffed. Likewise, in the single player portion of MyCAREER, we have more control over the action, not to mention the ability to outsmart five CPU opponents. It’s tougher to succeed going 1-on-5 in an online multiplayer environment. 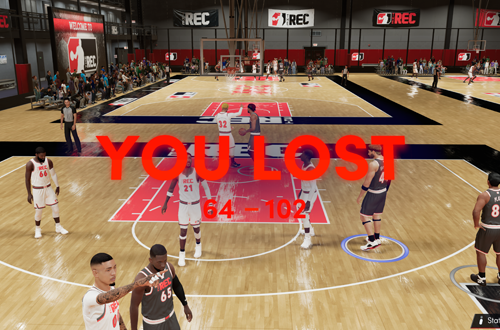 In short, the strategies that you employ when you’re Player One in an offline game are far less likely to succeed in online team play, and will alienate your teammates. It’s one thing if someone is being a bit of a hog in The Rec and they’re good enough to carry the team. There’s still boredom and frustration in being reduced to a spectator, but it’s more tolerable if you’re winning (or at least competitive), as it’s harder to argue the results. The problem is that most gamers who aren’t ready to drop that Player One mentality aren’t as skilled as they believe themselves to be, and thus place their team at a disadvantage by forcing up shots and generally being a selfish teammate.

These aren’t new observations, but to that end, it’s a recurring problem that’s difficult to solve. Obviously the aforementioned proper matchmaking mechanics would help somewhat. As I’ve pointed out before, the grading system in Rocket League has made the game accessible to new players, while remaining stimulating for elite competitors. Of course, there’s still the matter of attitudes and approach, especially in a mode like The Rec which is intended to be a place where gamers without a squad can find a game. If eliminating toxicity in gaming communities were easy, we wouldn’t hear so many complaints about toxic communities. It’ll always be an issue to some extent.

However, there are some problems in the way MyCAREER’s connected modes are designed that I believe exacerbate the issue, and make it difficult to encourage players to forego a Player One mentality. Before I get into that though, let’s focus on what we can do as a community. Obviously the problems with the style of play in the online scene are well known, as they’re frequently criticised. Unfortunately, we do little to act on those complaints. Again, there are aspects of NBA 2K’s online modes that make it difficult to combat toxic attitudes, but given the strong distaste people have for that approach to online play, it would benefit us to more actively fight against it. 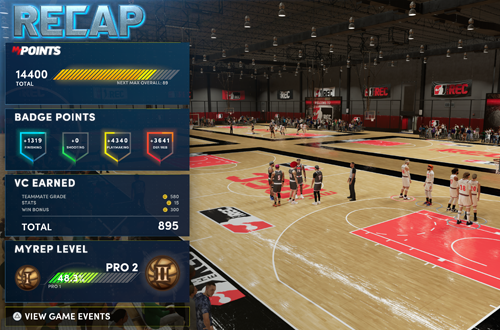 That would involve being more assertive in how we deal with gamers who aren’t ready and willing to not be Player One, once they step into the online arena. While it could be seen as stooping to their level, a movement to freeze out any gamers that hog the ball and ignore their teammates might be effective; especially when the increased ball movement and unselfishness results in wins. It’s leading by example, showing how dropping that Player One mentality and working together avoids being blown out by a more cohesive unit. We’d also have to emphasise the importance of doing things that don’t show up in the stats: keeping the ball moving, setting screens, and so on.

Needless to say, that’s not an easy task, and we’d need the game to help us out. Right now, the Teammate Grade is very generous as far as letting selfish and toxic players stick around, while conversely not being generous enough if you’re not filling the stat sheet. I’m leery of players getting kicked too easily for making mistakes, but I would suggest that consistent selfish play should lead to cumulative penalties. For example, if you continue to force up bad shots in traffic, the penalty to your Teammate Grade would increase with each one. On the other hand, consistent unselfish play would be rewarded by boosting your grade quicker, and reducing penalties for any mistakes.

It would also help if higher Teammate Grades provided an even larger amount of VC, and perhaps factored into how much Badge progress you could earn. A higher grade would buff the amount of XP, while a lower grade would offer no bonus, or even a nerfed amount for grades lower than C. In this way, there’s an incentive beyond just putting up stats in order to maximise your progress with your player, as the quickest way to upgrade Badges would be to play unselfishly and with consideration to your teammates. It would also reward players who sacrifice stats to do the little things like setting screens and rotating on defense, as they wouldn’t have to give up Badge XP. 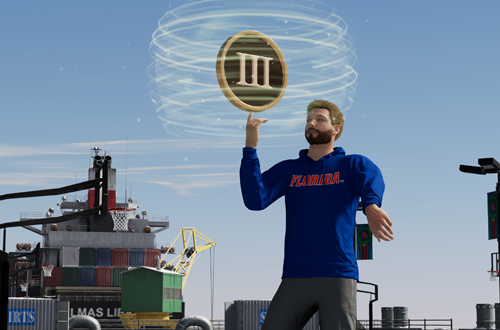 This brings us to the main sticking point that prevents gamers from being ready to give up being Player One when they jump online. The long grind that’s required to level up a MyPLAYER – both earning Badges and VC for the attribute upgrades – demands that we do everything that we can to make progress as quickly as possible; particularly if we want to play online. Starting at 60 Overall with no Badges places us at a tremendous disadvantage if we don’t grind hard at every opportunity (or indeed, pay to speed things up on the attribute front). Since earning VC and Badge XP means putting up big numbers, that’s naturally going to be the focus over unselfish play.

If this approach is limited to single player gameplay, there’s no issue. Indeed, a lot of gamers only touch the NBA side of MyCAREER in order to quickly level up, before putting it aside in favour of the connected modes. This is still a problem though, as it forces online gamers to play offline in order to stand a chance at being competitive in their preferred mode, just as the MyREP system forces offline gamers to play online to unlock certain features and content. The need to grind hard results in that Player One mentality carrying over to multiplayer, either because that’s what gamers are used to, or because they play exclusively online and need to make swift progress.

That’s why I believe incentivising unselfish play with bigger VC earnings and Badge XP would be effective. When the goal is to simply put up stats to get better, gamers are going to think of themselves and put their own progress ahead of winning games. VC can be purchased, but Badge progress can only be earned with stats. If progress is buffed and nerfed by Teammate Grade and not solely determined by putting up big numbers, there’s more incentive to be unselfish. As I noted, it will also reward gamers who sacrifice stats for their squad, compensating for lower numbers by taking into account their efficiency and unselfishness. Winning games should also grant boosts. 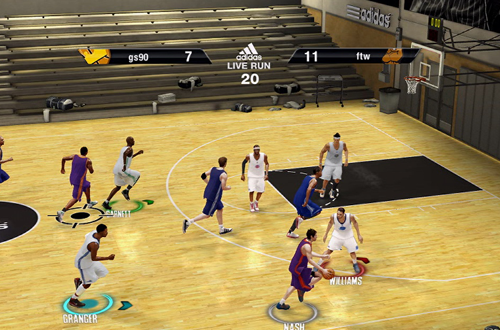 Should you require further proof that a longer grind encourages players to be selfish and less ready and willing to change a Player One mindset, I’d encourage you to take a look back at the original online team play modes in NBA Live. As I observed when I covered adidas Live Run in NBA Live 10 for Wayback Wednesday, the games that Pastapadre posted on his YouTube channel demonstrate how playing with real NBA players results in a very different approach. Ignore the aspects of NBA Live 10 that are dated now, and really pay attention to how the ball is being shared, how there’s an effort on defense. It was all about working together in order to pick up the victory.

Yes, online gamers in NBA 2K are (mostly) trying to win, but because we need to grind to level up our players, there are other factors that get in the way of that ultimate goal. When we were controlling NBA players rather than our own avatars, it was easier to focus on doing what it took to win games. Sure, some people still played selfishly because they maintained a Player One mentality, but there was no added incentive to be selfish. At this point, games can’t go back to using NBA players rather than an avatar, so it’s not a feasible solution. Gamers are clearly less selfish when they don’t have to focus on earning upgrades however, so it’s something to keep in mind.

As always, we need to accept our share of the responsibility for toxicity in NBA 2K’s online scene. With so much dissatisfaction, there should be enough people who can contribute to a movement to clean up play from a community standpoint. We do need further incentive from the games themselves however, as any efforts to improve the quality of play will suffer if selfishness isn’t punished, or indeed, is rewarded. From the starting ratings to the progression system, the game must adequately incentivise and reward us for realising we’re now one of the team, and thus ready ourselves to no longer be Player One. Otherwise, the online scene will continue to flounder.